So Long, and Thanks for All the Water

California is in a drought, and that makes no sense at all.

Why? Because it’s a coastal state. It's right next to the biggest body of water on the planet: the Pacific Ocean.

In fact, there is more water than land on our planet. No one should be in a drought ever, right?

This is flawed logic, of course, because all of the water on this planet can't solve a drought crisis if that water is unusable.

And salty seawater is exactly that.

97% of the water on Earth is ocean water that we can't use for much of anything. To make it usable, the water has to be desalinated — cleared of all that salt.

So far, desalination technology hasn’t gotten very much attention because the U.S. — along with the rest of the world — has freshwater sources called aquifers.

These aquifers are deep underground and hold massive amounts of fresh water, which get filtered through layers of Earth, leaving it cleared of salt and sediment, ready to use.

And this would be all well and good, no need to look into desalination at all, except... 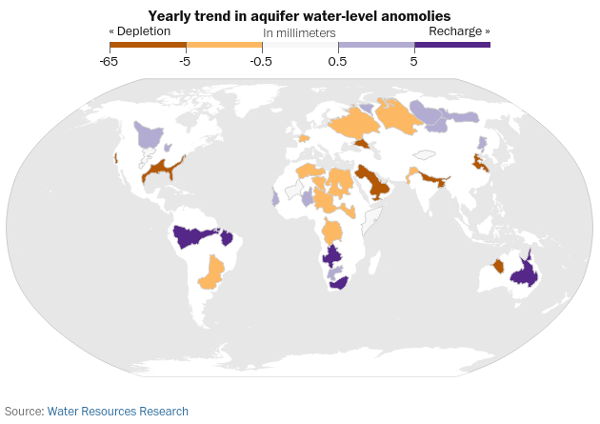 Here you can see that the majority of major aquifers on Earth are in depletion phases, meaning they aren’t being refilled as quickly as they need to be for sustainability.

We are running out of readily usable water.

Which means investment in desalination is going to have to pick up, and fast.

Last month I listed all the places the U.S. government will be investing in water. Roughly $280 million will be earmarked toward the water industry by 2017.

That's nearly 20% of the water budget going into desalination alone.

And it's only getting more important...

For the past few weeks, Luke Burgess, Christian DeHaemer, and I have been looking into ways to make you money on the increasingly troubling U.S. water crisis.

Desalination will be one of the biggest interests in the sector moving forward, and to get you started in that direction, check out Consolidated Water Co. Ltd. (NASDAQ: CWCO).

The company is already established in the water market as one of the biggest in the desalination game. It designs, develops, and operates both plants and water distribution systems.

And even with all that, it's still pretty small.

The company has 20 water plants that produce 26 million gallons of clean water per day. These plants are located in the Cayman Islands, the Bahamas, the British Virgin Islands, Belize, and Bali, Indonesia.

All places with clear access to ocean water just waiting to be freshened up.

Better yet, CWCO is entering the market in North America, specifically in northern Mexico and southern California, where the drought has hit the hardest.

Already the company is taking part in building a plant in Rosarito, Mexico, which will process 100 million gallons of water per day. It's set to be in production in 2017.

And although this could be a great small-cap opportunity to dig into before the market catches onto the water crisis that's developing worldwide, it's certainly not the only opportunity out there... not by a long shot.

Truth is, there's another hidden gem out there that's trading at a nice discount. More importantly, I want you to see how lucrative these water investments are firsthand, which is why I'm bundling up all of my research for you into a single investment report that will be in your hands soon.

Meanwhile, we'll dive even deeper into the ongoing water crisis over the coming weeks.