Trump vs. Coal: What You Need Know to Immediately

He did it again!

Is he truly committed to reviving the coal industry? Or is he just giving lip service to the sector in order to score some political points on the right?

After his recent moves, we can’t be so sure that it’s the latter.

You might have caught the headline, but it was buried in a steaming pile of confirmation hearings. Last week, a joint resolution flowed through Congress that would block one of Obama’s coal mining regulations: the Stream Protection Rule.

We’ll call it Obama’s final act in his war on coal. 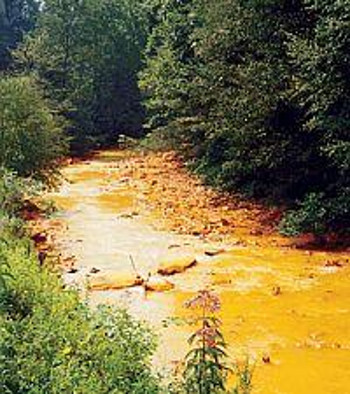 The rule was set up to provide environmental protection from the coal industry; it simply defined damage to the water balance outside of the permit area. You can read full text of the Stream Protection Rule here, just in case any of you speak legalese.

What this rule effectively did was put very strict regulations on where new permits could be approved, based on the possible damage for water contamination on the surface.

Specifically, we’re talking about acid mine drainage (as seen to your right), which is exactly what it sounds like.

So, even though we are not talking about an outright ban on spilling hazardous waste into a neighboring stream, it helped clarify formerly ambiguous rules on the matter.

Of course, your first inclination might be outrage that we’re stripping away a rule that has been protecting our streams from the big, bad coal companies, but I want you to keep something in mind...

In other words, everything is pretty much the same as it’s been since the early 1980s.

But if you think coal’s troubles are over, you had better take another look.

This time, I want you to take in the whole picture, and then you tell me where you think our energy sector is headed.

It turns out an aversion to coal is spreading.

I’ve pointed out time and again to my readers that we’ve been transitioning away from coal for more than a century!

The progress that natural gas and renewables have made in eating away coal’s share of our electricity generation has been extraordinary.

And yes, dear reader, it’s going to get even worse.

You see, even though we’ve been steadily reducing our reliance on coal, we’re quickly approaching a breaking point

Sure, there are a few short-term coal bulls out there right now, and for good reasons. In fact, the EIA reported this morning that U.S. coal production is projected to rise in the near term, reversing an eight-year downward trend.

During that period, however, U.S. electrical generation from coal declined by nearly 40%! 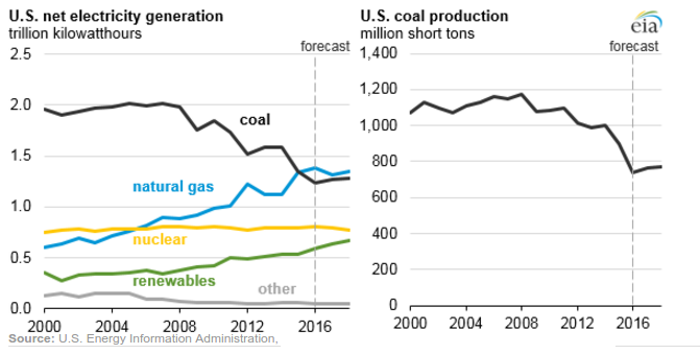 However, I also told you that my outlook on coal gets more bearish with each passing day.

We’re simply not building enough new coal plants to replace the old ones.

Remember to keep a few key points in mind, like the fact that more than one-half of all U.S. electricity generating capacity was constructed prior to the 1980s.

Oh, it gets worse.

Nearly three-quarters of ALL coal-fired power plants were built about three decades ago.

And if that doesn’t quite hit home for you right now, you should also know that the average life a coal plant is only 40 years!

I challenge anyone to look at the chart below and not instantly become bullish over natural gas (or wind, for that matter):

Of course, when you take a look at the bigger picture, the future becomes even dimmer for coal producers in the United States.

I believe coal companies have seen the writing on the wall here. I think they’ve seen it coming for years, yet the one hope they’ve desperately clutched onto in the middle of the night has been India and China — two countries ravenous for cheap energy that have been driving global coal demand.

And so long as coal companies here in the U.S. could tap into that market, they would live to see another day. Approximately 20% of India’s population — 240 million people — does not have access to electricity.

Moreover, over 70% of India’s electricity is already generated by coal.

Unfortunately, it appears that U.S. coal producers will have to stay optimistic without one of those growth catalysts: China.

It turns out the Middle Kingdom just canceled projects for 103 coal-fired power plants that were either under construction or in the planning stages. That’s 120 gigawatts of future capacity that now has to be made up through natural gas, nuclear, and renewable energy options like wind and solar.

People are going to have to face the truth at some point in the near future — it’s not just a few voices in the wild that are losing faith in coal... it’s everyone.

Investing in Elon Musk's "Goblin Metal"
The demand for cobalt in battery applications has risen 13% annually over the past 10 years and is set to continue increasing. By 2025, cobalt consumption is projected to have increased over 50% from current levels.
Trump's Bid to Save Coal Will Kill It Faster
Donald Trump has a lot of ideas about the fossil fuel industry and how he plans to "save" coal from destruction. Energy and Capital editor Megan Dailey explains why she thinks he's missing the point here...
The Wind Blows, the Sun Shines, and Coal Struggles
Energy and Capital editor Keith Kohl explains why investors should embrace the growth in solar and wind energy.
Coal Industry Looking Bullish
Don’t count coal out just yet. No, coal is by no means dead. The outlook for 2017 looks good... at least in the first half.
Hydrogen Fuel Cells: The Downfall of Tesla?
Lithium has been the front-runner in the battery technology market for years, but that is all coming to an end. Elon Musk is against them, but Jeff Bezos is investing heavily in them. Hydrogen Fuel Cells will turn the battery market upside down and we've discovered the tiny company that is going to make it happen.