At the dawn of the first tech boom in the early 1990s, few people truly understood what the internet actually was.

But that didn’t stop scores of institutional and retail investors alike from pouring billions into internet-related stocks. Over the course of the next decade — as we moved from dial-up modems and America Online to wireless connections and Facebook Messenger — many of those early investors walked away as millionaires.

This all despite having no clue what the internet was or how it came to be. History is about to repeat itself.

That story stems back 50 years from today and 30 years from the original '90s tech boom. The idea was first proposed by Leonard Kleinrock in 1961 in a paper titled “Information Flow in Large Communication Nets.” The idea blossomed amongst top computer scientists, and in 1969 the U.S. Defense Department's Advanced Research Projects Agency Network (ARPANET) began funding research into the development protocols for a network of interconnected communication devices.

In short, in 1969 the first iteration of the internet was born.

Yet as incredible as this breakthrough was, it would take another 25 years for the internet to reach the public sphere in any practical manner.

It wasn't until the mid-1990s that the internet become recognizable as we know it today. By then we had email, webpages, and online databases. We had America Online and Napster, and it was all pretty great. The early tech boom investors, whether they fully understood the technology or not, did know internet technology was a game-changer. And they were right. Today, functioning without the internet sounds like a nightmare.

Imagine going a few days without reading the news online or checking your bank statement or making a trade with your online broker. Even worse, imagine no Twitter (NYSE: TWTR), Facebook (NASDAQ: FB), or Instagram. Some people I know would have panic attacks at the very thought!

On a much larger scale, consider the impact we'd see on world commerce in light of a prolonged global internet outage. Production would grind to a halt. It would be like living in a modern-day Dark Age. That’s how important the internet is to our daily lives.

Now, with the advances in spatial computing technology, virtual and augmented reality, and artificial intelligence, a completely new iteration of the internet is upon us.

And like the tidal wave of wealth spawned by the '90s tech boom, the dawn of spatial computing and the metaverse will create new riches for a host of investors who get in early.

The experts at NVIDIA Corp. (NASDAQ: NVDA) call it the Omniverse; others call it the AR cloud or spatial web. Kevin Kelly, the senior editor at WIRED, calls it the "Mirrorworld." It doesn't matter what we end up calling this new version of the internet, though. What matters is how the advances in the technologies I referenced above are all converging in monumental fashion right before our eyes to create the metaverse.

In simple terms, the metaverse means “beyond the universe” and is a digital space with endless possibilities for development. Forbes provides a more apt description, calling it a “future iteration of the internet, made up of persistent, shared, 3D virtual spaces linked into a perceived virtual universe.” 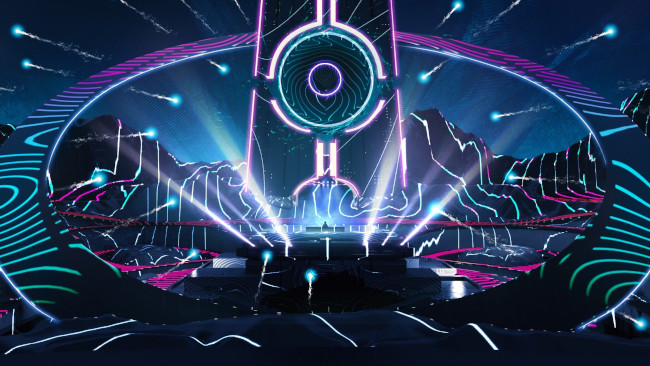 As investors, what's key here is the level of interest big tech is showing in metaverse development. In time, the metaverse could be extremely disruptive and reshape global marketplaces and e-commerce. For example, Vans — the globally recognized skateboard and lifestyle brand — recently opened a virtual skate park on the metaverse.

Here users can meet up in a virtual 3D space to skate with friends, design their own Vans shoes, and even build their dream custom skateboard at a virtual skate shop.

But virtual experience, e-commerce, and hangouts are just the tip of the iceberg.

Others believe the metaverse could reshape how we work, design, create, and collaborate professionally. Per The Verge:

As June came to an end, Facebook CEO Mark Zuckerberg told his employees about an ambitious new initiative. The future of the company would go far beyond its current project of building a set of connected social apps and some hardware to support them. Instead, he said, Facebook would strive to build a maximalist, interconnected set of experiences straight out of sci-fi — a world known as the metaverse.

Microsoft is also working to develop its own version of the metaverse. In a note released in May, Sam George, corporate vice president of Microsoft’s Azure IOT division, wrote:

Cloud and edge computing are coming together as never before, leading to huge opportunities for developers and organizations around the world. Digital twins, mixed reality, and autonomous systems are at the core of a massive wave of innovation from which our customers already benefit...

Metaverse apps are the culmination of the intelligent cloud and intelligent edge working in harmony together.

The bottom line is internet technology is advancing at a lightning-fast pace, and we're on the brink of a brand-new tech boom thanks to the convergence of incredible new technologies all finally working together seamlessly.

For investors, this means if you missed your chance to participate in the incredible wealth generation of the '90s tech boom, the evolution of spatial computing and the metaverse is your best chance to make up for lost time (and money).

In fact, I just issued my first "conviction buy" on one of the only publicly traded direct plays you can make on the metaverse today.