What keeps a billionaire 274 times over awake at night?

At first thought, it doesn’t seem like much would have tech magnates like Elon Musk burning the midnight oil while anxiety and dread sink in.

Care to see it for yourself?

You see, it’s not the first time he’s come face-to-face with a very real threat to his dream of putting an electric car in every garage in America.

In fact, history is repeating itself all over again.

And it’s going to be even more fruitful to individual investors the second time around.

Before I show it to you, let's hop in a DeLorean and rewind the clock seven years.

2015 was pivotal for both Elon Musk and Tesla. That year, Tesla built its first Gigafactory in Storey County, Nevada.

By January 2016, Gigafactory 1 went into operation, with six more being built since. As you now know, Gigafactory 1 was essential to churning out Model 3 electric motors and battery packs.

Make no mistake: Musk’s $274 billion fortune today was built on this moment.

But it wasn’t all fun and games for the billionaire.

You see, lithium prices were rather subdued when Gigafactory 1 became a fully armed and operational battery station.

And unfortunately for Musk, lithium prices soared over the next two years.

That’s putting it lightly too.

Fortunately, that price spike was relatively short-lived. After all, the market had gotten ahead of itself over the short-term demand for lithium.

Couple that with the fact that oil prices collapsed from a spat between OPEC and U.S. tight oil drillers, and lithium prices soon came back down to earth.

But not for long…

So you want to see the chart that can give one of the wealthiest humans on the planet nightmares? 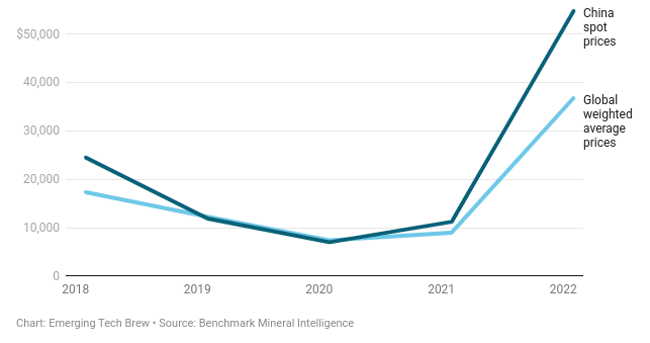 Except this time, Musk knows he’s in a much different situation.

Love him or hate him, Elon Musk understands his predicament all too well.

Back in 2015, he knew there would be a lithium crunch. That’s why he inked a lithium supply deal with a JV between Bacanora Minerals and Rare Earth Minerals.

Last year, Musk had to sit by powerlessly while the world’s largest metals producer, Jiangxi Ganfeng Lithium, scooped up Bacanora Minerals for a cool $391 million.

Soon after that, Musk was forced to secure his lithium supply with Ganfeng.

Well, it didn’t take a full 280-character tweet to announce that Tesla may have to get into the mining business.

Between his dependence on Chinese lithium sources and the fact that Tesla’s domestic deal with Piedmont Lithium has been delayed until as late as July 2023, does Musk have any other choice?

Well, it turns out he does.

And the best part is that these guys are doing it without operating a single mining project.

Instead, they’re using a proprietary technology that is changing the lithium game in North America.

Let me show you exactly how they’re doing it here.