From the moment computers were first created, they've been competing for second place. The undisputed king of information processing, the human brain, has been running laps around our most advanced technology for almost a century now.

After decades of grueling research conducted by nearly every modern nation on the planet, our fastest computers have almost managed to compete with the human brain.

Sure, they can effortlessly kick our asses at chess, and even a smartphone can crunch more numbers in a few minutes than we could in an entire lifetime.

But for the foreseeable future, that squishy supercomputer resting inside your skull is the most advanced computing device in the known universe.

And it isn’t working alone. Our biological “sensors” — eyes, ears, nose, taste buds, and touch receptors — are like alien technology compared with their clumsy artificial counterparts.

To be fair to computers, we’ve spent all of human history optimizing the world to play nicely with our senses. We take for granted how easy it is to navigate the world and exchange information.

But now that we are sharing the stage with a new generation of smarter computers, a world that was previously designed for human eyes could start showing some interesting changes.

For the first time in history, entire industries are being redesigned without humans in mind. Let me explain...

Humanity’s first semi-successful foray into the strange new world of computation was named the Electronic Numerical Integrator And Computer, nicknamed “ENIAC” for short. And despite its shortcomings, it is hands-down one of the greatest technological leaps that mankind will ever make. 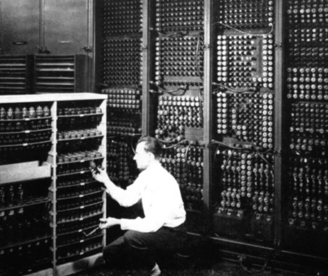 Built in the late 1940s, this ancient ancestor of modern computers was massive. It took up 1,800 square feet and weighed more than 25 tons total. And even with all that hardware, ENIAC was barely able to muster a measly 5,000 operations per second.

For comparison, the newest iPhone can chew through something in the realm of 5 trillion operations per second, all from the palm of your hand.

At the most basic level, our brains follow the same principles as a typical computer: Our top-of-the-line sensors input information, the brain works its processing magic, and the result is an “output” in the form of thoughts, actions, and consciousness.

Granted, that might be one of the biggest oversimplifications ever written. Brains are the whole package: They can process huge amounts of information at a moment's notice, all while using a tiny fraction of the energy a comparable supercomputer would need.

Tasks like image recognition, language processing, and predictive learning are power-hungry tasks, even for room-sized supercomputers surrounded by Ph.D.s. Yet somehow, our measly three pounds of brain can crush all those tasks simultaneously, sometimes unconsciously.

How our brains do this is a question that has stumped neuroscientists for years. And surprisingly, the answer that unravels the whole mystery is coming from a completely unexpected field of science.

What These Tiny Rainbows Can Teach Us About Brains

One of the largest industries on the planet also happens to be the most susceptible to disruption from an artificial brain. Taking humans out of the equation here would save countless lives, dollars, and wasted man-hours.

The multitrillion-dollar gold mine in question here is the transportation industry. Successfully replacing human drivers with a fleet of autonomous vehicles (AVs) would cause disruption on a scale that hasn't been seen since the Industrial Revolution.

To pull it off, a computer would need to beat humans at a few of the most demanding tasks we can throw at them. And they're going to need a few shiny new gadgets to help them get up to speed. 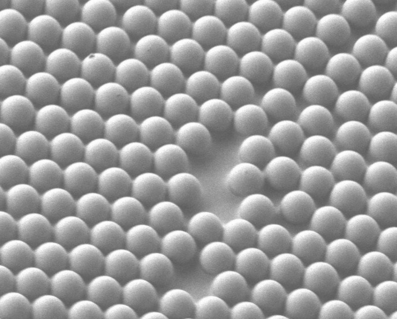 The latest in robot-friendly tech is a breakthrough in materials science called microscale concave interfaces (MCIs). This newly discovered nanoscale technology is made from row after row of tiny concave mirrors embedded together in a flat sheet. At first glance, it looks no different than an ordinary strip of plastic.

Researchers at the University of Buffalo recently discovered that this material produces a dazzling “micro-rainbow” effect when hit with a laser. With each different color laser, a unique pattern of rainbows was reflected. Almost immediately, the lead scientists on the project realized the importance of what they had created.

You see, AVs currently have a fatal weakness: They can't read.

Aside from never knowing the joy of finding a good book, that means cars have a particularly tough time with street signs. Shiny, reflective surfaces are perfect for our human eyes, but AVs work on an entirely different set of principles.

These micro-rainbows would react perfectly to the unique type of “eyes” that the newest generation of self-driving vehicles rely on. As the closest thing we have to an artificial human eye, this new tech is helping AVs take a giant step closer to beating humans on our home turf.

My colleague Keith Kohl is in the final phases of releasing his entire library of research into this emerging field. And inside his investment presentation, Keith breaks down exactly why massive companies like Tesla, Hyundai, and Amazon are throwing billions of dollars into developing this tiny device.

I can’t wait for you to see what he’s uncovered.

It's safe to say that this is the most disruptive piece of technology we’ve covered in a long time.

Keep a close eye out for details on how it could steal the spotlight from a market that is currently worth nearly $1 trillion.

1 CHIPS for All: Where Are Biden’s... 2 The Beginning of the End 3 Trust Me, Lithium Isn’t Going Anywhere 4 I Was Wrong About Oil 5 Cash in on the Great Onshoring

1 CHIPS for All: Where Are Biden’s... 2 The Beginning of the End 3 Trust Me, Lithium Isn’t Going Anywhere 4 I Was Wrong About Oil 5 Cash in on the Great Onshoring