Global Gas Takeover... or Not

I understand that may be difficult given the Middle Kingdom's growing addiction to natural gas, but the country is now rapidly developing its natural gas sector.

But it expects to nearly double that amount over the next two and a half years.

That isn't even taking into account its latest $400 billion gas deal with Russia, either.

Truth is, you don't have to look that far to take full advantage of the situation.

Are you really buying into the LNG export craze?

It's not exactly a well-kept secret that shareholders have been generously rewarded ever since Cheniere Energy mailed its LNG application to Washington, D.C. — over a span of just four years: 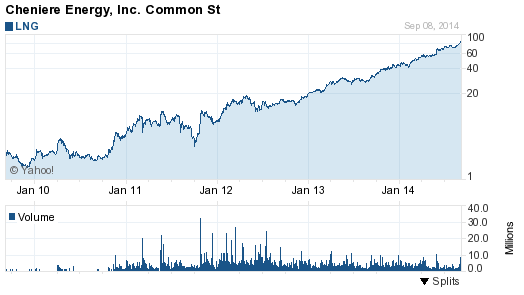 To date, the Department of Energy has approved a total of 45 applications to export liquefied natural gas.

The overwhelming number of those approvals, however, is to countries with which we hold free-trade agreements (South Korea is the world's second-largest buyer of LNG). In fact, only one of the eight applications to export LNG to a non-free trade nation has been given final approval; the rest were given conditional authorizations.

But the concern isn't necessarily to whom we're planning to ship our future gas supply, but rather how much we're about to send.

Assuming all of the pending export applications are given the green light, we're talking about exporting roughly 49 billion cubic feet per day.

Even though it could take the DOE up to two years or more to make it through the current list of applications, it's still an overly optimistic outlook on U.S. natural gas production — perhaps a little too much.

Two weeks ago, I mentioned that the United States will heavily rely on its tight and shale gas resources to meet demand over the next two decades.

Unfortunately, that may turn out to be the biggest understatement of this century, and below you can see the role shale gas wells have played in this production mix since 2008: 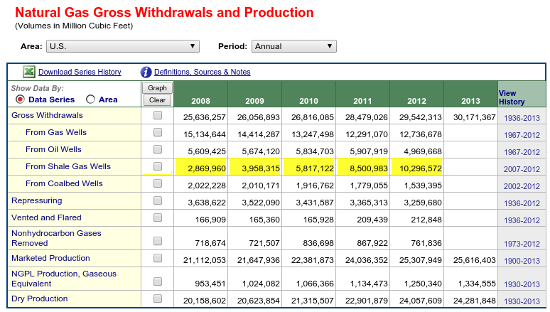 For a moment, let's forget the fact that producing natural gas from these shale wells comes at a much higher cost.

And you can bet this growth trend will continue in the coming decades.

The EIA recently reported that natural gas made up more than half of U.S. power plant capacity additions during the first half of 2014. 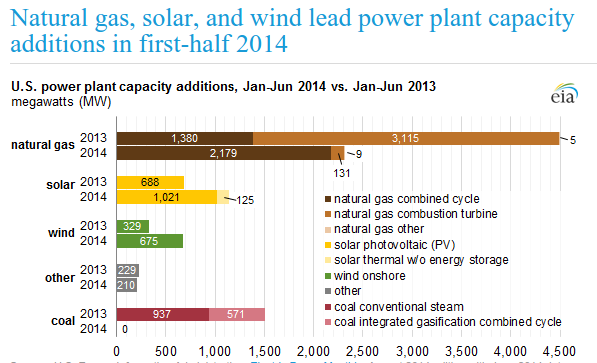 I can hear solar enthusiasts rejoice from here. However, remember that even though year-over-year solar additions grew considerably, about 75% of those additions took place in just one state: California.

Of course, the EIA's report was further evidence that the death of coal is upon us. As you can see above, the United States hasn't added a single megawatt of coal capacity so far in 2014. In fact, only two coal plants were expected to come online this year, both of which have been delayed.

Earlier this year, I told you there was a sweeter spot for gas profits.

My colleague, Christian DeHaemer, hit the nail right on the head when it comes to this fundamental transition taking place U.S. energy consumption. You see, his readers are capitalizing on three companies positioning themselves as we speak...

And the best part is that these little investment gems will continue gaining momentum even if the price of natural gas drops to all-time lows.

You can learn the full details — absolutely free — right here.