Investing in the Ultimate Commodity

The Resource War for ALL Sectors

When the well runs dry, we know the worth of water.

You may not recognize this quip from Ben Franklin that I mentioned a few months ago, but you will soon.

Truth is, the world consumes an incredible 576.9 trillion gallons of water each year!

And even though you might not be concerned about the water crisis where you live, I challenge you to step outside of your shoes for a moment and take a look at how dire the situation is becoming...

Remember, while some people may keep the faucet running as they brush their teeth, approximately 738 million people worldwide don't even have access to clean water.

As you can probably guess, one of the main catalysts leading to the world's water crisis comes from the simple fact that despite water covering nearly three-quarters of the planet, less than 3% of it is freshwater.

Of course, the vast majority of THAT potable supply is frozen solid, making things even more unavailable.

Not only are things getting worse, but this is a resource war that affects every sector in the market.

And what most people still don't realize is that water truly is the world's ultimate commodity.

The Worth of Water

Digging into the world's water statistics, the situation looks downright nightmarish, and here are just a few that come to mind:

What's worse is that most experts agree we have a poor handle of the current water crisis.

More important, however, is the fact that most people — investors and non-investors alike — still haven't grasped how valuable this commodity has become over time, or even a glimmer of how important it will become going forward.

And yet things are getting worse now in some areas of the United States...

Blame it on rampant population growth, excessive waste in usage, or even global warming if you want, but it's clear that this crisis won't be solved in the near future.

In fact, much of the American west is having serious issues with drought. Here's a look at the current situation, which, as you can see, shows how bad the situation is in California: 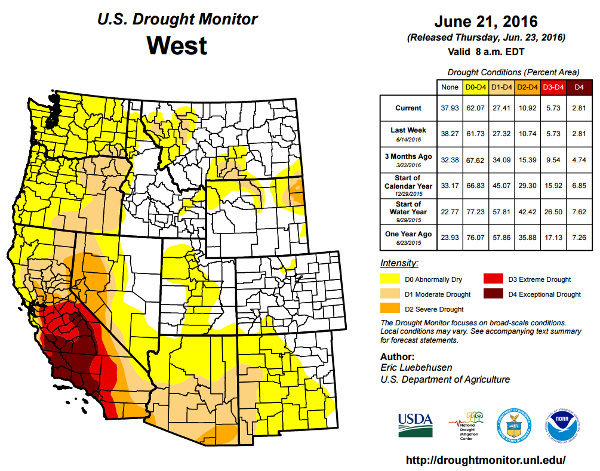 Just think... western states from Texas to California have been in a drought for at least 11 of the last 14 years.

Experts are now even concerned that a “mega-drought” is in store for us in the foreseeable future.

The government has already announced more than $48 million in grants to help farmers and ranchers in the western United States conserve water and energy.

My readers, however, are well aware of the old investment adage: crisis breeds opportunity.

That's how you should approach the water crisis.

Water is more valuable to us than oil, renewable energy, and even gold.

And the sheer fact that the market still hasn't fully caught on to this crisis has caused some of the best investment gems out there to remain hidden in obscurity.

One of the most difficult parts of getting in on these powerful investments is uncovering them!

Even today, I'm still shocked to find some of the most undervalued stocks right now are tied to this ultimate commodity.

But I want to take out ALL the guesswork for you.

I want to SHOW you one that is flying higher than the rest of the sector. And I've laid out all of my research, right down to the last cent shareholders will rake in from growing revenues.

I'll send you this new investment report on the ultimate commodity this Thursday morning, so keep an eye out for it to hit your inbox then.