Investing in the Blue Gold Rush

What's in Your Water?

The day is finally here.

After years of preparation for both the hosts and the competitors, the 2016 Summer Olympics begins in Rio today.

I wonder how many of the players will go home sick — because it's bound to happen.

Actually, competitors are guaranteed to get violently ill should they ingest as little as three tablespoons of the water in the bay.

They've been warned to keep their mouths closed and to not put their heads under the water (not sure how the swimmers will manage that).

All in all, it's going to be rough sailing for the Olympians this year.

It had to clean up the notoriously filthy waters of its hosting city, Rio de Janeiro.

In theory, the Olympics tourism would make up for any costs incurred. In reality, the promise of clean waters fell flatter than the paper on which it was written.

Brazil originally promised to increase wastewater filtration in the Guanabara Bay from just 15% to a full 80% by the time the games began.

They managed to bring it up to 50% and called it a day.

It would be one thing if the water were just full of natural pollutants, or even just trash. But it's not. Most of the muck flowing into the fully 50% unfiltered bay is human waste.

You see, Rio doesn't have the wastewater treatment that we have here in the U.S. Most of their waste goes straight into the bay, which supposedly washes it out to sea, but it infects the tepid water with a number of harmful, medicine-resistant bacteria.

It's not just gross. It's dangerous.

Barring someone wising up and shutting the whole thing down for the safety of everyone involved, I'll be watching the games from the safety of my couch, drinking filtered water from a bottle.

Maybe just not from the tap.

Baltimore has its own water issues, and while I take advantage of the water filter system for drinking water, I'll indulge in the occasional bottle.

The problem of lead-leaking pipes isn't unique to Baltimore, and we both know that other cities have much bigger issues...

The U.S., despite the majority of its water being filtered, isn't immune.

Just this week a report came out about a whole new water crisis happening in Cape Cod. Turns out that most of the water in the area comes from a single aquifer, and that aquifer is subject to all manner of pollution.

Understand, the cape is one big sandbar, which means anything that hits the ground can leech into the water supply. That includes chemicals and human waste.

And this isn't an isolated incident.

We've been following the national — and global — water crisis for a while now. It's one thing to say our aquifers are draining... but to add that they're being contaminated?

Think about this: It's not just Baltimore, Cape Cod, or California on the coasts that are having these problems. Aquifers right in the middle of the country are being drained, too: 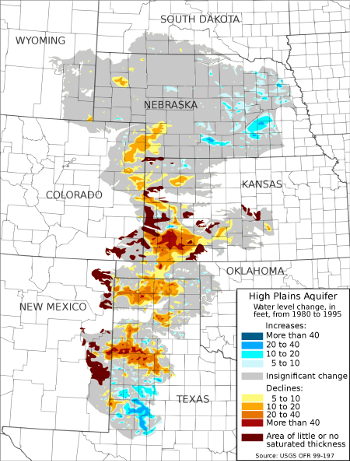 That's all one aquifer, the Ogallala.

You think it's bad when just one part of Maine shares a water source? Try one that stretches into eight states.

And, if you'll notice, very little of the Ogallala is being replenished.

Most of it is either depleting or making little change, which means it's just barely breaking even for water use. And these states are land-bound; where else will they get their water if this aquifer runs dry?

From companies bottling water at outside sources, of course!

It's no wonder bottled water is about to outsell soda for the first time ever this year.

In fact, soda companies are making a mint bottling water, which is currently a $13 billion industry, and only getting bigger as the water crisis persists.

The bottom line is that water has become our ultimate commodity for a reason.

Nothing on our great green Earth can live without water. And there's nothing to replace it if we can't find a way to make it useable again.

People are finally starting to take notice. But it's not just the soda companies that are raking in the gains.

And it's all thanks to THIS investment (click here for the ticker symbol).

In fact, it's outperformed 80% of the stocks on the Dow Jones Industrial. And since its IPO, it has even beaten the likes of Coca-Cola!

Truth be told, there's simply too much good news to squeeze into this short piece, but I want you to still have the chance to catch the early profits on this incredibly undervalued stock.