Not many people would take this very seriously. I certainly didn’t. So when a colleague suggested it, you can see why it was hard to accept.

I can understand some of the doubt over Tesla. Believe me, when the stock broke above $200 a share for the first time, I was told there was no way it would move higher. When shares surpassed $300, surely a crash was around the corner.

Will we hear the same thing when shares crack $400? Absolutely.

That’s not to say things won’t go south for Tesla. Is a correction sorely overdue at this point? Maybe. The speculation alone is enough to give pause to even the most hardened investors. And not a day passes that the media doesn’t flood us with the latest of all things Musk.

Well, perhaps we’ll find out next month after the first round of Model 3s is delivered.

We’re talking about a company that will be rolling out half a million vehicles from its Gigafactory in 2020.

You can’t take that projection lightly.

But here’s the bit of wisdom that I can offer you: forget Tesla.

Let analysts argue about Tesla’s stock price until they’re blue in the face. Let Elon be the media darling that he’s been for years.

But if you’re not a Tesla shareholder right now, chances are you’re either waiting for the correction (or crash, depending on your opinion) or you’ve uncovered the one story that keeps Musk up at night.

There’s always a driver for growth. Tesla isn’t a special case. It’s the reason I told you a few weeks ago that I’m perfectly happy taking gains from Tesla — without owning a single share of its stock!

Ah, but if you’re one of my regular readers, you already know where this is headed, don’t you?

I’ll bet the first thing that comes to your mind is lithium. After all, we’re still in the early stages of the lithium revolution. As you can see, lithium prices have exploded higher over the last year: 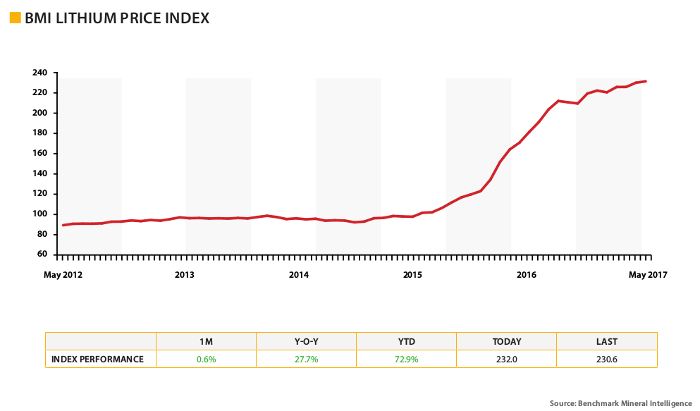 You can probably guess what happened during that price spike, too...

And still, the supply-demand picture is bullish for the foreseeable future thanks to the surge in demand.

Don’t make the mistake of thinking Tesla is the only player in town. Daimler announced in May that it expects to make 10 new EV models available by 2020. The automaker is investing US$562 million to construct a lithium-ion battery factory in Germany.

Not only is he banking on Nevada’s lithium boom for a close supply, but his worst-case scenario is simply relying on one of the three kings in lithium production (SQM, Albemarle, and FMC).

There are few cases in which Tesla won’t have access to the lithium that will fuel its Gigafactory.

Despite my bullish outlook for the lithium market over the next 12 months, there is a much, much more important story you need to look into.

That, dear reader, is the story that everyone else is missing today.

And he has nobody to blame but himself...

Three years ago, media headlines were saturated with news about the upcoming Gigafactory. You’ve read them, I’m sure.

But did you catch the one promise Tesla made at the time that made my jaw hit the floor?

The company announced it would use only raw materials sourced in North America.

Alarm bells should be ringing in your ears right about now.

We’ll push aside the potential issues with lithium, because Tesla’s cobalt crisis will be far more intense.

I told my readers recently that cobalt is the king of the lithium revolution.

Although I’m willing to give Musk a little wiggle room here (companies in North America need time to ramp up production), he has a crisis of conscious on his hands — as well as one helluva potential public relations disaster.

The vast majority of the world’s cobalt reserves are located in one of the worst resource spots possible: the Democratic Republic of the Congo. Exploitation of children as a labor force and inhumane working conditions are just two of the unacceptable factors that Tesla cannot be associated with.

Meanwhile, roughly half of the world’s cobalt supply will be used for batteries in 2020.

Demand in Asia is surging higher. Supply will be unable to satisfy everyone.

And it’s a win-win situation for investors like you and me.

Next week we’ll delve even deeper into the cobalt situation.