Lithium is already necessary for efficient nuclear power, space travel, and every rechargeable item we own. Now it's going a step further and creating a lucrative ground-floor opportunity for individual investors like us.

Through both Tesla (NASDAQ: TSLA) and its sister company SolarCity (NASDAQ: SCTY), Elon Musk is bringing off-grid solar-powered batteries to businesses and homes.

In fact, we already know he has 38,000 pre-orders for these batteries, and some are going to Australia to support its move to solar power.

Needless to say, this story is going to get even bigger going forward...

Tesla's electric cars are already popular in Europe and China, and the company is partnered with Japan's Panasonic, the world's largest battery manufacturer.

Does it sound like I'm just throwing a list of major deals at you? I admit it; I am.

But you need to realize this: Tesla is only 12 years old, and it already has a massive worldwide reach. The demand for its products is sky-high.

Of course, the biggest question that's floating around the market today is, “Who's going to supply Elon Musk and his friends with all this lithium?"

It's a good question... yet we can already hint at the answer.

Our first clue lies within the location of Tesla's Gigafactory. It's no coincidence that Musk decided to place his Gigafactory right on top of the United States' only lithium hub — a potentially great source for his supply issue, or at least a portion of it.

Make no mistake; that factory is going to need 15,000 tons of lithium carbonate per year just to start.

And at last count, the U.S. only has 38,000 metric tonnes in proved reserves. The 500,000 lithium car batteries that Musk wants the Gigafactory to produce per year will eat that up.

The supply situation looks even tighter when you consider the fact that we still have to include demand from the home and business batteries that Tesla — and now SolarCity — will be offering.

Yet that single hub cannot be Tesla's only source of lithium.

Understand that we can't just focus on Elon Musk. After all, lithium is a globally mined and globally used metal.

Lithium use in batteries has risen 78% in four years, with batteries accounting for 30% of lithium demand by 2014.

Moreover, global lithium consumption is expected to grow to 35,000 tonnes per year by 2020, according to the United States Geological Survey. The USGS also estimates that global lithium reserves amount to about 13.5 million tonnes.

To put it bluntly: The world is not short on lithium.

However, it is short on producers that can efficiently extract and refine it.

Tesla has already announced that it will put U.S. companies first when it comes to finding its supply, which gives potential lithium producers in the United States a leg up against competing producers.

I'd also like to note that smaller lithium players here in the U.S. are taking notice and preparing for the surge in demand.

For example, just look at the recent merger between Western Lithium U.S.A. Corp. (TSX: WLC) and Lithium Americas Corp. (TSX: LAC), which gives the combined company assets in both the U.S. and Argentina — a country that holds the world's fourth-largest proved reserves of lithium.

So again, we have to consider the question of where companies like Tesla will turn for their lithium supply. 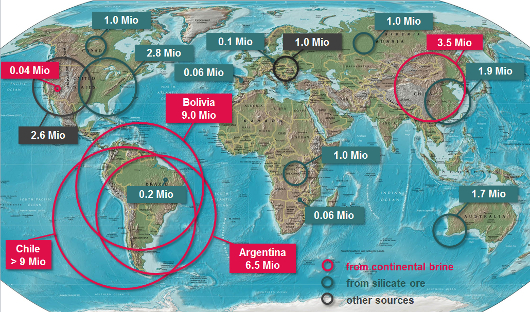 When it comes to lithium extraction, there are two methods — but only one is catching our attention.

The “silicate ore” circles indicate lithium in rocks. Although this kind of mining extraction is costlier and more difficult, it's still a main source of lithium for companies in places like Australia and Africa.

As you know, lithium is abundant on Earth, but it has very low concentrations in rock, which must be mined and crushed, then separated and ground down further. That mixture is submerged in liquid to separate the lithium particles from the rest of the minerals. It is then filtered and dried back into a solid.

Now take another look at the image above, and you might notice something else that's peculiar: Brine-based reserves, held in mineral-rich aquifers, account for roughly 66% of the world's lithium resources.

Thing is, brine extraction is by far the cheaper, more economic method.

The concentrations of lithium are much higher in brines because natural movement of the water and heat from the Earth have already released the lithium from rocks and sediment, separated it from many other minerals, and brought it closer to the surface. From there, it's just a matter of filtering.

But even this is still developing. Traditionally, the brine-based product is slowly air-dried. But there are already some methods by which the lithium can be dried through mechanical or chemical means.

That, dear reader, is where the real opportunity is in the ongoing lithium revolution.