Buy Gold to Hedge Against Number 36

Some will even risk life and limb to get it...

But most people don't even realize what money fundamentally represents.

They know they want a lot of it. And they know they can buy Pokémon Go upgrades with it. That's about it. But money is nothing more than this...

A medium for labor storage and exchange.

Energy is built up and stored in one location, transported, and expended somewhere else. Money does the same thing, except with human labor. So money fundamentally represents invested labor of some sort.

Everyone in the world uses a fiat currency as their money... as their store of labor. Most likely, you use the U.S. dollar to store and exchange your labor. But using these fiat currencies comes with a price. Nothing is free...

First, all of the fiat currencies are in competition with each other. And because they are all also subject to global market forces, fiat currencies come with an intrinsic risk of a complete collapse.

But also, all of these fiat currencies, like the U.S. dollar, are wholly owned and largely controlled by private companies.

A private company controls the value of the U.S. dollar?

The Fed's shareholders are its member banks. Exactly which member banks own how much of the Federal Reverse is a big secret. No one knows for sure. But we can assume that the largest member banks — the J.P. Morgans, Bank of Americas, and Wells Fargos — own the largest amount of shares.

Government is involved in all private business. It is just more involved in the Federal Reserve's business. And that business is the management and maintenance of its product: the U.S. dollar.

To that end, the Fed has strong control over the value of its product. And, again, I want you to remember what we're talking about: the value of the product in which you keep all of your invested labor.

The Fed can (and has) drastically increase supply of its product for various reasons. To stave off the global financial crisis of 2008 and save the U.S. dollar from further collapse, the Federal Reserve simply created a bunch of new U.S. dollars to buy up America's bad debt to increase the value of debt securities and lower their yield. 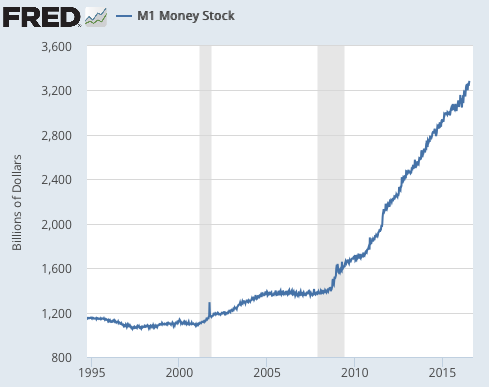 But while the Fed was able to kick the can down the road to stave off an immediate collapse, its quantitative easing seems to have failed. And the future of the U.S. dollar, American economy, and your invested labor is at risk.

Storing all of your invested labor into one currency like the U.S. dollar is like playing roulette... and let's exclude the numbers 0 and 00 for the purposes of this argument.

But keeping all of your invested labor in one form of money is like going to a roulette table and betting on 35 of the 36 numbers.

But if you stay at that table long enough, eventually that 36th number is going to hit. Then you've just taken a major step back.

What happens when that 36th number comes up twice? Three times?

Take a small step away from that risk and buy the insurance — the most historic and well-known medium for labor storage and a competitor to all fiat currencies: gold

Remember, gold is much rarer than most people think. There's only about 6.4 billion ounces of aboveground gold right now. But there are 7.4 billion people — less than one ounce of gold person.

New fiat currencies are being created all the time, which constantly dilutes their value. New gold is being produced every day. But ultimately, gold is a finite resource. Dollars can be created to infinity.

Own gold to hedge against number 36. It's not just a few dollars at stake... it's your hard-earned work.