Biden’s recent economic battle against China has been a one-two strategy.

First, pump money into previously neglected industries — for best results, make it a lot of money. 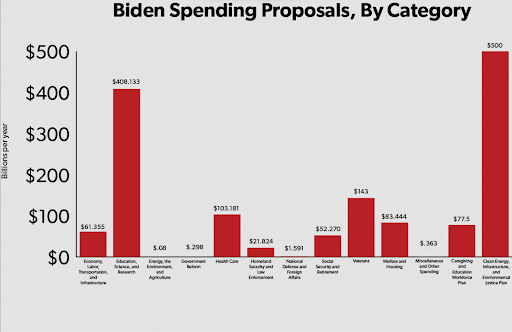 Next, once the seed is planted, dig a wide moat by banning any business with Chinese competitors.

Then, when the newly created domestic industry is on its feet and foreign ties are severed, funnel all that extra demand directly into a proud American™ company of your choosing.

Congratulations, you now have (at least part of) a homegrown supply chain that doesn’t include the Chinese Communist Party.

This has been Biden’s go-to move recently. And giving credit where credit is due, it’s been fairly successful — just ask the companies on the short list for a multibillion-dollar payday.

Take the recent CHIPS and Science Act, for example. This bill has the potential to completely revamp an industry that U.S. executives shortsightedly outsourced to China decades ago. 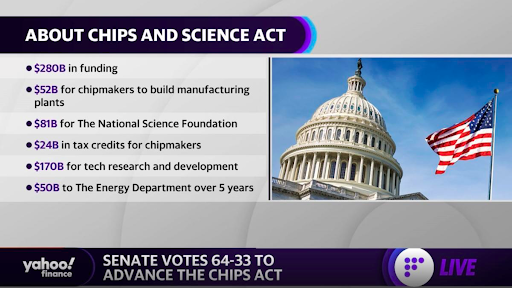 More than $50 billion is headed exclusively into the pockets of U.S.-based semiconductor companies, many of which are so small you’ve probably never even heard of them.

Before that, Biden’s massive infrastructure bill promised more than $1 trillion toward building up the U.S. transportation and communication networks.

The vast majority of that spending will go toward the domestic contractors and utilities that are actually getting the work done.

With semiconductor manufacturing and basic infrastructure signed and out of the way, Biden is moving on to the next industry he plans to claw back from China.

The good news? It comes with its very own billion-dollar payday.

Much to the dismay of fiscal conservatives across the country, Biden isn't done spending.

But much to the delight of investors, he’s pouring money into another one of the most lucrative sectors on the planet: biotechnology.

It’s another one of the areas that China dominates, particularly in the case of active pharmaceutical ingredients (APIs). While the current API market is valued at $200 billion, these raw materials are the backbone of the multitrillion-dollar generic drug industry. 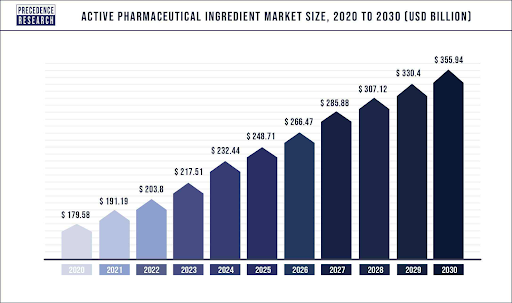 The U.S. obviously wants a piece of that action.

In response, Biden’s one-two punch is already in Phase 1. The president just signed an executive order directing $2 billion to the U.S. biotech sector.

The funding is earmarked for a wide range of specific use cases: Agriculture, pharmaceuticals, chemical manufacturing, and even forestry services are all getting their cut.

Biden has already started to make dealing with Chinese biotechs unpalatable for U.S. businesses by adding in extra paperwork. Subsidiaries of WuXi Biologics, one of the biggest Chinese companies in the sector, have already been added to the “unverified list.”

It’s not an outright ban, but it sets an ominous tone between the U.S. and China. As tensions continue to boil upward, as they have for years now, Biden has plainly told the world which side he’s on.

So now that the money has been allocated and Biden’s anti-China defenses are revving up, investors have one task on their hands: track down where that money is going before it sends its recipients’ stocks soaring.

Don’t Spend It All in One Place…

Just like the CHIPS Act, we expect some bigger names to take a cut. Intel and Texas Instruments are both practically assured to score some funding.

But what about the little guys? Neither the semiconductor nor the biotech industries are made up entirely of blue chip aristocrats.

On top of that, biotech in America is far more diversified and specialized. Some of the world’s most bleeding-edge discoveries occur in small-scale labs run by passionate researchers.

Have you ever seen what happens to a company barely worth a few hundred million dollars when it gets a government handout this big?

I’ll give you a hint — it’s something like this: 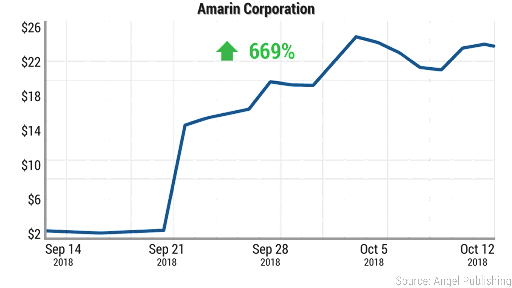 Or what about ProQR Therapeutics? Positive trial results and an FDA approval sent share prices through the roof back in 2018. 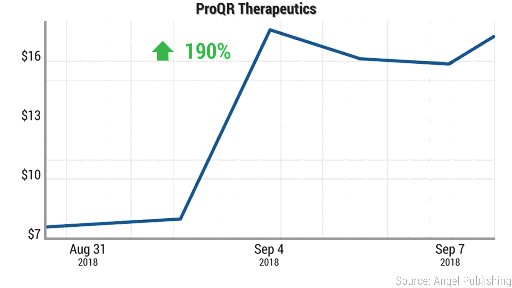 Only investors who paid careful attention to the complex web of regulatory approvals managed to cash out at the right time, before the stock settled back to a few dollars.

It’s not something that the average investor can do on a whim. Clinical trial data and official FDA documentation aren't exactly the most digestible reading materials, and there are a lot of them.

It takes our team of analysts weeks collectively to sift through everything. When I say that biotech isn’t for the fair-weather investor, I really mean it.

Our technique for separating the good from the bad is a simple one-two process, just like Biden's plan. It’s an often overlooked methodology commonly known as “Project Greenlight.”

In my opinion, it’s the only logical way to trade in the biotech sector.

Unless you enjoy reading page after page of dry research and STILL possibly coming to the wrong conclusion, you'll want to learn more before making any major decisions.