There's a good reason we aren't betting on the United States to export a significant amount of LNG in the future.

In fact, there are three of them.

The first became obvious years ago when we realized we're going to lose the race to tap the Asian LNG markets...

Even though marketable gas production in Canada peaked more than a decade ago in 2001, the country holds more than 424 trillion cubic feet of unconventional natural gas. Some companies plan to take full advantage of the profit potential of their resources through LNG exports.

Back in October, the Kitimat LNG project in British Columbia was granted a 20-year export license by Canada's National Energy Board.

They didn't really have much of a choice. Ever since the U.S. shale boom took off in 2008, gas prices in North America have suffered a steep decline.

In other words, many Canadian gas producers are unable to compete against the $2-$3/Mcf prices in the U.S.

As expected, the result has been a steady decline in U.S. natural gas imports:

I've mentioned before how Congress is already coming up with ways to stop U.S. LNG exports... and we haven't even started shipping it yet!

That pressure is led by our industrial sector, which makes up approximately one-third of gas demand and is enjoying the cheap gas more than any other.

I distinctly remember hearing this concern voiced while our Energy Secretary was being grilled during a routine budget committee meeting.

Imagine the kind of lobbying action that would take place if these companies were forced to pay the same $16/Btu LNG prices as China and Japan?

And the third reason is what I call the holy grail in energy investing: the transportation sector.

The potential alone is enough to make most investors salivate...

The president highlighted the transition toward alternative-fueled trucks (natural gas or electric) in his State of the Union address this year.

And Reuters reaffirmed the benefits of switching to natural gas-powered fleets earlier this month: "If all trucks in the United States were converted from gasoline to natural gas, that would save more than $40 billion a year in fuel costs at current price levels in the U.S."

Even the 30% decline in oil prices over the last few months hasn't had the kind of effect on gasoline prices that many had hoped for.

If T. Boone Pickens can fill his truck up for about a $1 a gallon using natural gas, why shouldn't you?

Buying Has Never Been This Easy

For years, we've discussed some of the most profitable natural gas investments on these pages.

Things have turned out quite well for investors who took our advice: 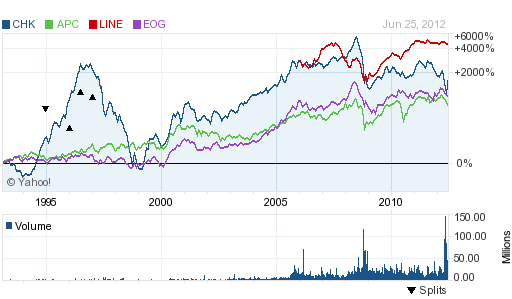 Even the hype over future LNG exports has been fruitful for early investors.

Putting your cash into Cheniere Energy two years ago would have been reason to smile: 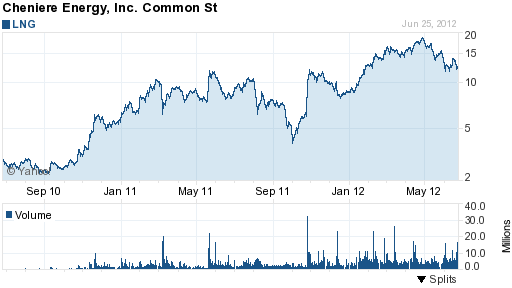 But one word from Congress could put an end to those kinds of gains — especially when people realize keeping our cheap natural gas here in the States is a smarter play than shipping it halfway across the globe.

Let's be clear: They will come to that realization eventually.

And really, what's so bad about keeping our domestic gas production? We haven't had the luxury of cheap energy like this since the Texas oil gushers of days past...

The reality of the situation is we're still years away from Cheniere's first shipments leaving its Sabine Pass LNG Terminal, and the pressure to block exports is building on Capitol Hill all the while.

When it comes to natural gas, timing long-term profits is the secret to success.