Special Report: The Safest Way to Invest in Bitcoin

Not long ago, I had the privilege of speaking with one of the founders of the very first IRS-approved cryptocurrency IRA. His name is Chris Kline, and he’s the chief operating officer (COO) at BitcoinIRA.

Now, to be completely honest, I probably wouldn’t have been interested if it hadn’t been for two facts...

First, the IRS approves of the investment, which means that customers won't get hounded by the government for trying to evade taxes.

Second, the communication for setting up the interview was flawless, which told me this probably wasn't just some fly-by-night operation that was trying to scam people out of their money.

Going into the interview, I was pretty skeptical. I mean, there are so many companies out there that just popped up overnight to take advantage of the recent boom in cryptocurrencies.

It’s like when weed was getting close to legalization and all those pump-and-dump scams sprung up in order to make a quick buck from unwitting investors.

But when we were done talking, I was honestly excited about what this company is up to. And I wanted to share it with you...

I know, it sounds crazy to some of you. Heck, it sounds a little crazy to me, too. But it’s completely possible, mostly thanks to this company.

The operation is a subsidiary of an established firm that’s been helping investors for years. It’s not some startup running on avocado toast and happy thoughts. It’s a real firm with real investing experts. Chris is one of them.

And it’s been set up for helping people like you turn your traditional or Roth IRA and even your 401(k) into an investment in cryptocurrency. You could roll over an existing account, or you could even set up a new one with the company and keep your equity investments separate.

And the really great thing is, in my opinion, that the company is providing a seamless and integrated approach to the whole process.

The company works with trusted partners. This means that you won’t have to worry about scammers or about your coins being stolen by some high school hacker in his parents’ basement.

It provides assistance and education every step of the way.

And, since you’re setting up an IRA, it’s tax-deferred until distribution. This means that you can buy and sell within the account without having to worry about capital gains taxes until the end.

In fact, the difference between investing in crypto in an IRA versus a nontax-deferred account is staggering. Chris gave me an example of a test that the IRA did where it used both types of accounts. The company started with $5,500 in each and made about five trades over four years.

After taxes, the regular account was up to $15 million and change. Not too shabby, right? But the IRA, since it wasn’t shelling out massive tax payments, was up over $25 million.

I don’t know about you, but I could think of a few things to do with that extra $10 million...

Now, that’s just an example. As far as I know, no actual money was invested. It was just a test for proving a point.

But when it comes to cold, hard cash, the stories are still impressive. Some of the IRA's clients started with around $350,000 in an IRA or 401(k) and are sitting on over $1 million only a few months later.

"I Quit My Job at Intel for This"

The company has garnered some serious interest from some pretty smart people. There was a wave of folks who came on board not long after the company first launched last year.

And they quit their lucrative jobs at Intel just to free up those 401(k)s and invested them into Bitcoin.

If you’re shocked to hear this, you’re not alone. I was practically speechless when Chris told me about it. I mean, it’s not Google, but you can make some serious cash working for a company like Intel. And for these people to up and leave so they could get involved with BitcoinIRA is mind-blowing.

But it’s true. Here’s a CNBC interview with one of them. You can meet Chris in it, too — he’s the young guy at the beginning. 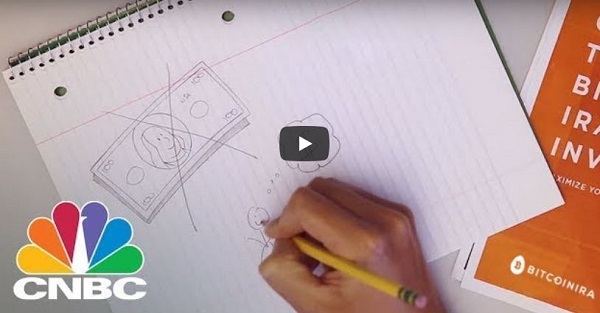 Since the Intel folks jumped ship and got in with Chris and his associates, more have followed.

The company started its first customer account last year and has already grown to around $100 million in assets under custodianship (AUC).

Everyone Is Doing It

But don’t get the wrong idea; it’s not just techies getting in on the action. I asked Chris about the company’s customer demographics, and they’re about as varied as you can get.

There are a lot of tech- and urban space-driven investors in the mix. But there’s also a hotspot of folks who are in the late 40s to mid-60s age range — people who've spent their adulthoods learning how to use new technologies like computers, the internet, and smartphones.

And, of course, there are a lot of younger folks from the app generation. You know the ones: Young people who are so familiar and comfortable with new technology that they’re quick to adopt anything that’ll make their lives easier.

But what was most surprising to me — and extremely encouraging — was that there’s no gender bias when it comes to BitcoinIRA’s customers. They’re pretty much evenly split on gender.

And I don’t know if you know this, but that’s not the way it is in the traditional investing world. When it comes to stocks and bonds, men by far outnumber their female counterparts. It’s one of the things that we're seeing contribute to the ever-growing income disparity between the two sexes.

Self Directed With Some Training Wheels

Now, BitcoinIRA isn’t like some Fidelity IRA. You won't be getting a fund manager making trades for you. You’re the one who's in charge of the trading in your account.

And the IRA is currently working to automate more and more of the process...

The goal is to make your BitcoinIRA experience much like that of E*TRADE and Scottrade. Meaning, you’ll have the ability to put in limit orders, have access to robo-balancing (automatic rebalancing of your account to your own specific allocation strategy), and even be able to have instant transactions when they’re done with the upgrades. No waiting for wires or checks to settle when you add coins or shuffle your positions from one currency to the other. So, you won’t have to worry about the price changing so much that your once profitable trade becomes a dud.

You'll even get the ability to have internal diversification. That is, you won’t have to invest in just Bitcoin. You’ll have the option of owning Ethereum, Ripple, Litecoin, and even Bitcoin Cash.

I’ve shied away from cryptocurrencies for years, and I've done so for many reasons. One being that if somebody steals my cryptocoins from me, they’re gone. They’re an untraceable currency, and I just don’t like the sound of that.

But I do see the benefits of them. And with more and more mainstream adoption coming every day, cryptocurrencies are becoming increasingly more likely to stick around for the long run.

Chris and his coworkers at BitcoinIRA have taken some of the murkiness out of the market. And I have to say, if you’re looking to trade cryptocurrencies, this is the safest way I’ve seen yet. The company works with a few trusted partners so you’re not dealing with a myriad of sketchy folks when making your trades. And it offers bank-level security for your account, your transactions, and your wallet.

If you’re interested in learning more about cryptocurrencies before you make the move to BitcoinIRA, take a look at this informative presentation that my colleagues Alexandra Perry and Jason Stutman put together. They've been helping me in better understanding the industry, and they could also do the same for you. If you'd prefer to read a transcript, you may do so here.

If you’re still skeptical about this kind of investment but still want to get in on the cryptocurrency action, you’re in luck. I have another friend, Luke Burgess, who has found just the investment for you...

The company in question's technology is essential for the existence of cryptocurrencies. So, take a look at Luke’s presentation about the Bitcoin printing press here to learn how you could profit from cryptocurrencies without ever owning a single coin. Or you could read the transcript here, if that’s more your style.

Whatever way you decide to play it, you stand to make a tidy return. So, check out those presentations and take a look at the BitcoinIRA site when you’re done, should you want to learn more about the company.

Also, check out Alexandra's podcast where she talks with Chris and delves even deeper into the world of cryptocurrency investments.

To investing with integrity (and taking advantage of every option),