Gas Stocks on Every Investor's Radar

If you were expecting to see natural gas prices spike in 2014, prepare to be disappointed...

Barring some unforeseen geopolitical catastrophe, I don't expect natural gas to average more than $4.00 per MMBtu next year. And trust me when I tell you this is a good thing... because it means the United States can finally develop a taste for natural gas.

There's one thing all Americans enjoy, regardless of your political persuasion. And that's cheap energy.

And right now, for the first time in a long while, we actually have an abundant, inexpensive source of fuel at our fingertips. There's plenty of unconventional gas to go around.

Let me show you exactly how much natural gas we're talking about... 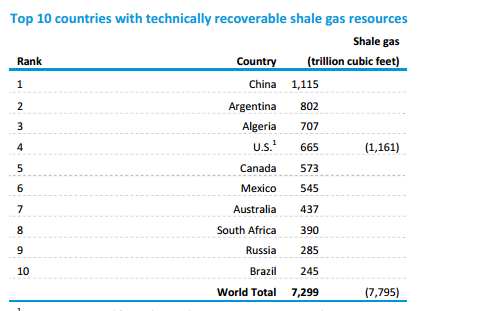 In North America, this supply of shale gas has been an unerring game-changer since 2008.

In case you're wondering what the addition of shale gas to U.S. domestic supply has been so far, this should give you a good idea: 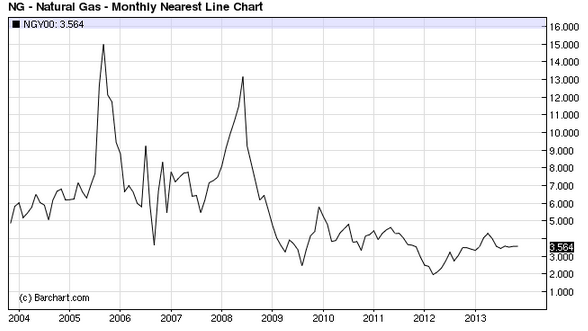 At its lowest, contracts of natural gas at the Henry Hub traded for under $2 per MMBtu in 2009.

Dirt-cheap natural gas prices took a heavy toll on drilling activity. Today, there are just 220 rigs drilling for natural gas, compared to the 1,385 rigs gunning for oil. And unfortunately, this trend isn't likely to change in 2014.

But before you discredit potential natural gas investments altogether, there are a few upsides worth calling to your attention...

The first, and perhaps most obvious, is that demand is steady. The EIA's latest Short-Term Energy Outlook reports that natural gas consumption during 2014 will be relatively flat next year, averaging 69.60 billion cubic feet per day (less than 1% difference from 2013 levels).

Interestingly, there's just one gas-producing state keeping the United States' domestic supply propped up. Within the first six months of 2013, Pennsylvania produced nearly 1.5 trillion cubic feet of natural gas. By the time we ring in 2014, that amount will be well over three trillion cubic feet.

Easy access to this supply of unconventional gas via lower nat gas prices is the sole reason the Northeast and Mid-Atlantic regions are using an increasingly larger share of natural gas in their electrical generation.

And while there's plenty of opportunity present in North America's domestic gas market, the real money in natural gas will be made abroad.

That's right. When it comes to natural gas, the future is much brighter across the Pacific.

These LNG contracts aren't being signed for the short term. No, we're talking about multi-decade supply commitments. Moreover, the IEA suggests more than 80% of new LNG supply is being shipped to Asian countries.

It all comes down to three words: cold, hard cash.

I expect Asian countries will be desperate to add natural gas to their energy mix going forward (China has reiterated this sentiment time and again in the past). What's more, they will be willing to pay upwards of $20 per MMBtu next year.

Things get even better for investors with exposure to LNG players beyond 2014. Remember, the first North American LNG exports are slated to begin after 2015. You can bet the house that Asia will be ready to receive every last drop of this chilled fuel.

When it comes to North American natural gas supply, Canada is in a far better position to exploit the global LNG markets than the United States. The reason for this lies in the ultra-low price environment inside the lower 48 states...

Cheap natural gas in the U.S. practically guarantees weak prices for Canadian gas exports. It's no secret that nearly all pipeline exports to the U.S. — which account for 94% of the total — come from Canada.

I see two options left for Canadian producers: They can either drastically reduce their gas supply, or they can expand lucrative natural gas market.

The latter course of action is readily achievable by tapping future Asian demand.

Last year the Energy Information Administration suggested the world was poised to enter a golden age of natural gas if unconventional gas resources are developed...

I'm telling you today that it's not a question of if, but rather when North American natural gas starts flowing across the Pacific and into the hands of the Chinese and Japanese. Both nations are waiting with open arms, ready to pay a hefty premium for a steady supply.

So, where is the investment angle in all of this?

Only a handful of companies are positioning themselves to capitalize on the long-term value in this cleaner burning fossil fuel.

Even fewer individual investors are able to focus their attention away from the current tight oil boom long enough to recognize this golden opportunity.

If you happen to fall into the pool of investors starstruck by shale stocks recently, it's time to shift your strategy.