Now, the energy industry is facing a crossroads with President-elect Donald Trump taking his place in the Oval Office in January.

We know Trump supports fossil fuels, which in the case of natural gas is a great sign.

Natural gas produces about half the carbon emissions of coal power, so you can imagine how excited clean energy supporters were when it took the top spot.

Unfortunately, Trump isn’t for clean energy; in fact, he’s said that he’d like to do away with most of the U.S. regulations mandating cleaner energy production, including the Clean Power Plan.

But is that really what made natural gas into the ultimate coal killer in the first place?

There were two big changes in the last few years that put natural gas in the spotlight and coal on the back burner...

In December of 2015, the U.S. entered into a landmark agreement between nearly 200 countries to tackle carbon emissions and improve clean energy infrastructures.

Even before the meeting in Paris, though, the U.S. was developing its own plan, which eventually became the CPP.

The plan put forth carbon reduction goals for each state to meet from its mix of power generating plants. Indirectly, it was meant to reduce the use of fossil fuels and increase investment in solar, wind, and other renewables.

Nationally, it aimed to reduce the country's carbon generation levels by 32% from 2005 levels by 2030.

Each state was required to submit a plan of action no later than September of 2018, after which time the EPA would be able to enforce its own plans over the state’s energy production.

This didn’t sit right with a lot of people, our soon-to-be president included...

Trump’s problems with the plan are two-fold: it takes the power out of the hands of the states, and it goes directly against his interests in the coal industry.

For obvious reasons, his supporters in the coal industry concurred.

You may have heard of a leaked document that hit the Internet last week. It was written by Trump’s new head of energy transition, Thomas Pyle, and it laid out all the probable changes the Trump administration would be making in U.S. energy.

Keep in mind: probable, not definite.

The list included a range of motions, including pulling out of the Paris agreement and cutting energy subsidies. But the EPA was clearly the real target of the attack.

Trump has never been secretive about his disapproval of the CPP, and he’s not backing down now.

The problem is, it won’t help save coal. While federal regulations were certainly an extra bit of encouragement, the U.S. was well on its way to cleaner energy long before it was announced.

The U.S. reduced its carbon emissions by 21% from 2005 levels as of 2015, according to the Energy Information Administration. This, of course, came with the growth of natural gas use and a reduction in coal consumption from every sector. 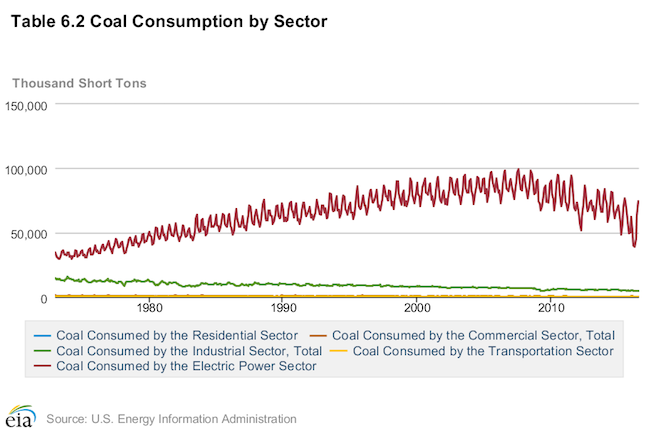 This has been the real problem with the CPP all along: it wasn’t necessary to keep the U.S. on track to clean energy production.

So what happens if Trump succeeds in killing it?

Nothing happens, that's what.

It wasn’t some global meeting that made the U.S. give up coal in favor of natural gas. It was a cheap, abundant supply of the stuff, plain and simple.

In 2008, when hydraulic fracturing took the oil and gas industry by storm, it started a chain reaction that sent the price of both commodities plummeting. It wasn’t good for drillers at the time, but it did wonders for energy producers.

Suddenly, there was a reliable domestic supply of natural gas that could keep plants running more cleanly than coal, and at surprisingly competitive prices.

Who could say no to that?

So while the natural gas market took its blows in stride — we’re moving into recovery mode as you read this — the coal industry languished. The chart above shows how coal consumption has already peaked, and it isn’t going to climb back up from this fall.

Meanwhile, natural gas stocks are finally on the rise again. Prices are inching back up as the normal market cycles take over.

So if Trump thinks killing off the CPP will do anything to stop the decline of coal, he’s got another thing coming.