Only Haters and Luddites want Tesla to Fail

A few weeks ago, the good folks over at Inside Automotive published a piece entitled: Inside $TSLAQ: An organized group of Tesla short sellers tearing up the automaker on Twitter

It's brilliant, so I decided to post it here.

What is $TSLAQ and when did it originate?

$TSLAQ has been referred to by media outlets as an organized group of Tesla “short sellers.” To best explain $TSLAQ, for those who may not be into stock trading, short sellers are making a bet that a stock (could also be a sector or a benchmark on the market) will fall in price, which results in the seller making a profit.

Here is a quick explainer on how this works: A short seller borrows shares of a stock from a broker. Brokers benefit from this arrangement regardless, because they make interest for lending out the shares and are paid a commission.

Instead, short sellers wait for the stock price to go down. Let’s say it drops to $0.50 per share. The short seller could buy 1,000 shares at half the price to return it to the broker. They then keep 500 shares, which they could sell at $0.50 a share, hypothetically making $500 in profit.

Short selling could obviously backfire, because if a stock’s performance goes positive, the short seller makes no profit and loses money by paying an even higher price for the stock.

Historically, short sellers have targeted sectors and companies that some see as destined to fail. If you want to learn more about short selling, I would recommend watching the film “The Big Short,” on how one short seller made a ton of money on the 2008 financial collapse.

$TSLAQ refers to Tesla’s stock ticker “cashtag” on Twitter, with the added “Q” representing a potential bankruptcy filing. There are many on social media that believe Tesla will one day go under. In fact, the automaker is one of the most shorted stocks on the public market.

The community largely exists on social media, specifically Twitter. While Tesla (and electric vehicle) skeptics have likely existed since the company was founded, a research indicated that $TSLAQ largely rose in 2018, after a whirlwind year for the automaker.

Typically, you can find members of $TSLAQ replying and offering commentary on most of Tesla CEO Elon Musk’s tweets, as he is very active on the network. 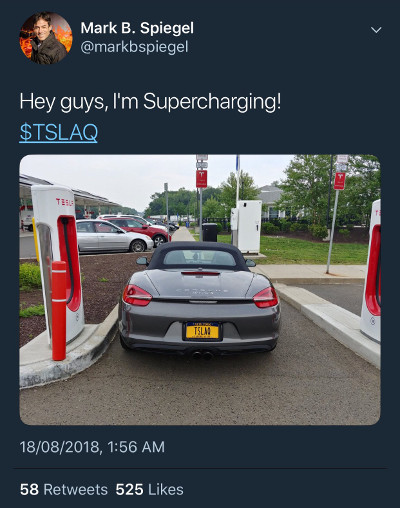 Who is at the forefront of $TSLAQ?

Speaking of “The Big Short,” the investor who inspired the film, Steve Eisman, is a prominent short seller of Tesla stock. Other influential short sellers: Gabe Hoffman, founder of Accipiter Capital Management and Marc Cohodes.

But what makes $TSLAQ truly fascinating is the legion of social media personalities that are fueling the fire against Tesla fans and CEO Elon Musk on Twitter. In some cases, it is unclear if these personalities are actually Tesla short sellers, if they’re trying to expose fraud at the company or if they purely dislike the company and its CEO Elon Musk.

Here are a few of the characters I have identified on the forefront of $TSLAQ on social media:

@TESLAcharts: With over 16.2K followers, this Tesla short seller is one of the most prominent $TSLAQ accounts on Twitter. As he writes on his account, “The mission of @TeslaCharts is to unabashedly serve the confirmation bias of #Tesla bears. We flow with the content curation current, providing exactly what bears most want to see. Especially helpful on days the stock goes up on bad news. Enjoy accordingly…”

@BrunoMoon: This Twitter user refers to himself as the “Managing Principal at Arasfield Capital,” although it is likely that is not a true identity. In one tweet, Bruno speculated that Tesla was treated favorably with its construction of the Chinese Gigafactory, due to the company “bailing out” Maxwell Technologies, a Chinese investment.

@ERMusk: This Twitter account has a picture of Tesla CEO Elon Musk in a striped prison outfit, while accusing Tesla of having a “toxic balance sheet,” “a garbage product” and being a “psychopath.” @ERMusk accused journalists of being “activists” for Tesla, including Recode’s Kara Swisher and Bloomberg’s Dana Hull.

@jzanotherpatsy: $TSLAQ has no borders, as @jzanotherpatsy says they tweet out about $TSLAQ in China. The user recently noticed that Tesla’s Chinese division recently ended a 0 percent interest car loan promotional campaign and compared Tesla to the “Fyre Festival.”

These members of $TSLAQ often have contentious discussions on social media, with pretty much any thoughts about the automaker being negative.

Many of these tweets will point out the financial instability of $TSLA. For instance, this tweet from @John54436259, said, “$TSLA is massively indebted and has no path to profitability,” mentioning that the automaker has lost money every year since 2003, which was before current CEO Elon Musk had even joined the company.

Currently, many $TSLAQ members are tweeting about Musk’s statements in his legal case against diver Vernon Unsworth. One $TSLAQ member claimed Jeffrey Epstein advised Musk on the “420 tweet,” in reference to Musk saying he thought Unsworth was another “Jeffrey Epstein.” There is no evidence that this actually occurred.

What’s interesting is that many claims about the automaker and Musk from $TSLAQ members are unsubstantiated or false. It seems that while some $TSLAQ members do focus on illustrating raw sales numbers and projections, others seem to be more interested in creating mayhem by amplifying a false narrative in an effort to “topple the company.”

Why do $TSLAQ members want Tesla to fail?

But some Tesla bulls argue that $TSLAQ members merely want to see the company fail not because of the product, but because Elon Musk is at the helm of Tesla.

From monitoring social media conversations, it seems that many $TSLAQ members have a genuine dislike for Musk. For instance, $TSLAQ member claimed that “Elon’s feeling even more insecure than normal.” Another compared Musk to a bodily excretion.

The type of language used by some $TSLAQ members indicates that they are more interested in destroying the company, and Musk, than making money off of a Tesla short.

What is the perception of $TSLAQ?

Musk, for one, hates short sellers. He has indicated he thinks short-sellers should be illegal, tweeting, "Exactly. Short-sellers are value destroyers. Should definitely be illegal.” To that, @skabooshka (a prominent Tesla short seller personality on Twitter) responded, “We’re not shorting your stock. We’re more like...investing in your tweets lol.”

One thing to note is there is also a community of Tesla die-hards (many who also happen to read this newsletter). In their eyes, $TSLAQ members are their arch-rivals.

Tesla is aware this community exists. The automaker has gone as far as getting a restraining order on @skabooshka (Randeep Hothi), for following a Tesla Model 3 on a video shoot for an autonomous driving demo. (The restraining order was later dropped.)

Could $TSLAQ actually take down the company?

Naturally, the stock market is volatile and goes through its highs and lows, particularly with a “new-ish” automaker, like Tesla. Tesla also seems to draw attention unlike any other automaker. It seems that most short sellers are looking to make money off of that volatility and publicity.

But what some short sellers may not understand is the capital intensive nature of the automotive industry, particularly for companies that are developing electric vehicles. The cost of EV batteries is immense, along with the cost of building new production facilities and expanding model lines. This should be more of a driving force to the valuation of a stock and the strength of a company than Musk’s tweets or behavior.

Let’s look at estimated U.S. deliveries for Q2 - based on this data from GoodCarBadCar - the automaker reportedly delivered 53,300 vehicles. In that quarter, Tesla delivered more cars than Cadillac, Acura, Chrysler, Land Rover and other automakers. While the automaker is still growing, it is clearly posting some real sales numbers that are competitive with luxury automakers.

While there are many short sellers, there are also many prominent Tesla investors, including Morgan Stanley, BlackRock, Baillie Gifford & Co. and Fidelity Investments. It is likely that these firms would not allow Tesla go to “bankrupt,” making $TSLAQ’s ambitions look like a “pipe dream.”

You can read more great editorial from Inside Automotive, here: https://inside.com/auto