Why Mexico Will (Gladly) Pay for Trump's Wall

Believe it or not, there’s one thing that Mexican President Enrique Peña Nieto and Donald Trump can actually agree on.

No, it has absolutely nothing to do with building a wall.

You have to understand how unusual it is for Mexico to be in this situation. After all, the country is home to the once-mighty Cantarell oil field, which for decades was one of the world’s largest fields.

Unfortunately, production from Cantarell peaked in 2003, and the irreversible decline that followed has been devastating to the Mexican government.

But just how bad have things gotten?

Well, to put it one way, I believe we are just starting to see the country reach its breaking point.

Of course, you may argue that it already has...

While the rest of us were ringing in the New Year with celebration, a massive public backlash was taking place in Mexico.

All it took for the panic-driven populace to revolt was something that was utterly unavoidable: taking away gas price subsidies.

Look, I know it’s easy to dismiss the news with a wave of a hand, saying, “They’ll be fine. They just have to pay a little more to drive.”

However, when 52% of your citizens live below the poverty line, raising gasoline prices is a hard blow to take on the chin. 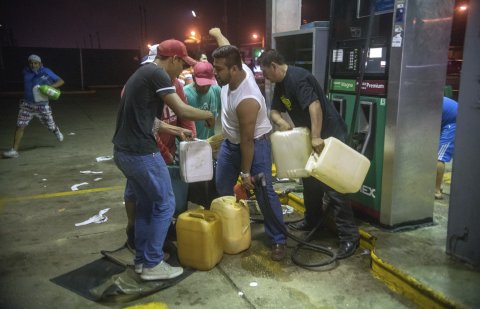 Yet no matter how necessary these energy reforms are to avoid total collapse, the people have channeled their outrage over the 20% gasoline price hike with a vengeance. There have even been stories surfacing that the country’s drug cartels would target gas stations.

The problem is that these kinds of energy reforms are absolutely necessary.

It’s a cold, bitter pill of reality that former oil-producing giants have to face eventually. Even the Saudis, who enjoy some of the lowest-priced gasoline on the planet, are already slowly rolling back their gasoline subsidies.

Thing is, it’s more than just gasoline that Mexicans should worry about.

And even though President Nieto is adamant that Mexico will not pay for Trump’s wall, he really doesn’t have much ground to stand up against him. At least, not if he wants to fuel the growing demand from gas-fired power plants.

It really shouldn’t come as a surprise for you to learn that Mexico has been quietly developing a thirst for U.S. natural gas.

Although we’ve been talking about the growing connection between Mexico and the U.S. shale gas for years, a very important event took place in 2015 — that was the year Mexico became the biggest source for U.S. natural gas exports.

It’s also no coincidence that this addiction coincided with a surge in U.S. natural gas output.

Right now, more than a trillion cubic feet of natural gas is sent via pipeline to Mexico every year.

Of course, there’s one major hurdle still to clear... one that President-elect Trump will take care of for us.

If there’s one thing we can count on over the next four years, it’s that Trump will pour a lot (or a really, really, really, huge, tremendous amount, as he would put it) of cash into infrastructure projects in the U.S.

Pipelines, to be specific.

Over in Mexico, the country’s energy minister announced a bold plan to expand Mexico’s natural gas pipeline network. Contracts to about a dozen pipeline projects are being awarded as we speak, one of which includes the Texas-Tuxpan pipeline, which will transport 2.6 billion cubic feet of natural gas every day over more than 500 miles (part of which is an underwater route below the Gulf of Mexico).

When all is said and done, these projects will add more than 3,200 miles of natural gas pipelines throughout the country.

Right now, there’s a little story gaining traction in the media down in Texas, where protesters have set up camp to prevent a new pipeline from being built.

Well, it worked for the Dakota Access Pipeline, the stopping of which was one of President Obama’s last acts in office.

Don’t get too excited...

Be honest here: is there even a question that a Trump administration will not only give these two controversial pipelines the green light, but spark a rush of similar projects?

Keep an eye on how quickly work will continue on these pipelines; it’ll give us a good signal of the kind of growth we can expect in the sector. More importantly, it will let individual investors like us take full advantage the situation.