There's a war brewing between China and Japan.

It won't be a border dispute or some diplomatic mishap...

In fact, it will only take one issue to spark it — and that's energy security.

And this fight really comes down to natural gas. Both nations are desperate to get their hands on as much of it as possible, and both are willing to pay steep prices for it.

How can we be sure?

In December, China's LNG imports broke a new record of 1.83 million metric tons, roughly 21% higher than a year ago. As you can see below, the country's demand for natural gas has quickly outpaced production ever since it became a net natural gas importer in 2007... 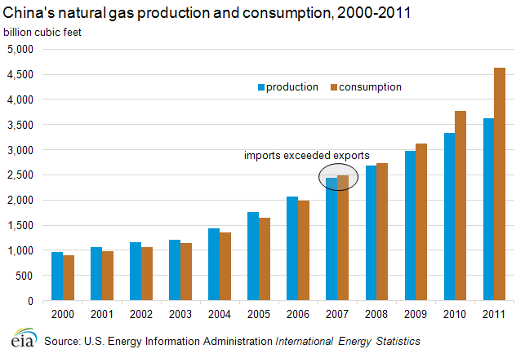 But why would there be Chinese animosity towards Japan?

What's more, both countries are fighting to secure one specific source of natural gas: LNG.

And as you might have heard, we have plenty of it right here in United States.

Let's assume for a moment that U.S. LNG exports go off without a hitch — that the governmental red tape doesn't smother these projects. After all, one word from Congress, and the whole LNG ship sinks.

Today we'll give them the benefit of the doubt that they'll convince the U.S. manufacturing sector not to put up a fight.

And for now, we'll stick to LNG plays relating to United States exports.

If we broaden our scope to encompass North America, the obvious choice would be the Kitimat project in British Columbia. The Kitimat facility is in the perfect position to tap into the Asian LNG market.

Last week, I mentioned how Chevron recently went all in on Kitimat after buying a 50% stake in the project.

But as an investor looking to capitalize on the U.S. LNG export buzz, which road do we take?

Do we bet on Exxon, Cheniere, or Shell?

Each one intends to become a major player in future U.S. LNG exports...

And I can't help but ask, “Why not take profits on all three?”

Staying solely within the lower 48 states, siding with Cheniere Energy and their prospective Sabine Pass LNG terminal has made shareholders happy so far: 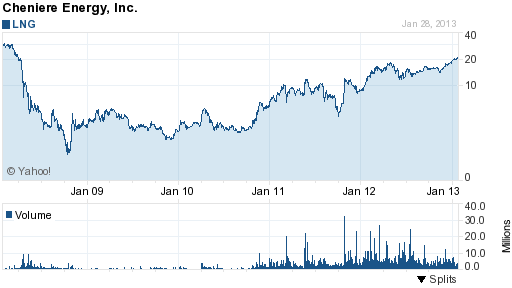 With a total export capacity of four billion cubic feet per day, Cheniere will be ready to start sending shipments in 2015.

After the latest 20-year deal inked with Total, Cheniere's already sold half of its capacity of approximately 2 Bcf/d.

We've pointed out the one downside to this strategy several times last year: The problem is most of these shipments will be destined for Europe — and not the Asian-Pacific market, where prices reach as high as $18.

For that, you'd have to turn to Alaska, which has direct access to China and Japan. The trouble with this plan, however, is that Alaska is far from ready to export LNG. One huge step in exporting LNG is having the natural gas to ship!

Although nobody is objecting to Alaska's plan to export LNG to countries like Japan, we're going to need to see more infrastructure in place in order to get the natural gas to overseas buyers... and that, dear reader, is the secret to capitalizing on U.S. LNG exports safely.

Kinder Morgan signed on with Shell this week to export LNG in Georgia.

TransCanada, on the other hand, is teaming up with Exxon, ConocoPhillips, and BP in Alaska.

The plan is to build an 800-mile pipeline from the North Slope to LNG facilities in southern Alaska. The pipeline comes with a $65 billion price tag.

Of course, that's only part of TransCanada's role in North American LNG exports. Over the last two years, I've told you about their stake in the Kitimat facility. However, Kitimat's success depends on its access to natural gas — and I'll give you one guess as to which company is planning to transport natural gas from the Horn River Basin in British Columbia to the project... 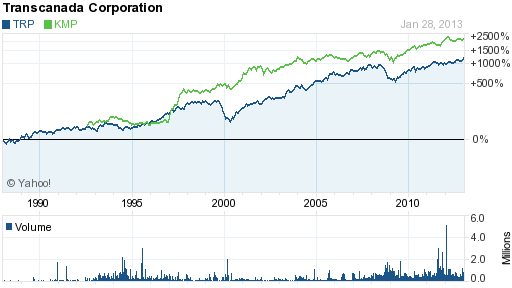 These infrastructure plays have been one of few safe havens left for investors over the last several years. And the best part is these profits aren't limited to LNG...

We've been taking advantage of them in practically every aspect of the North American energy boom, including the now-famous Bakken Formation, where even billionaire investors like Warren Buffett are desperate for a piece of the action.