Right off the bat, President Donald Trump has pledged to invest a whopping $1 trillion into America’s crumbling infrastructure.

He’s planning to put the money into the construction of new roads, highways, and walls...

And no doubt, several hundred billions of those dollars will flow into the energy industry, as he plans to "lift the restrictions on the production of $50 trillion worth of job producing American energy reserves, including shale, oil, gas and clean coal."

As Forbes put it, "Expect American oil and gas production to surge."

In fact, Trump calls the oil and gas industry "the lifeblood of America."

This is the pipeline project that has pissed off so many people in North Dakota — and all over the world, for that matter.

Why? Because the proposed route of the pipeline runs beneath a lake near the Standing Rock Sioux Indian Reservation.

I’m sure you’ve heard the story by now.

It’s made front-page news as thousands of activists from around the world have traveled to North Dakota to push back on the construction of the pipeline. 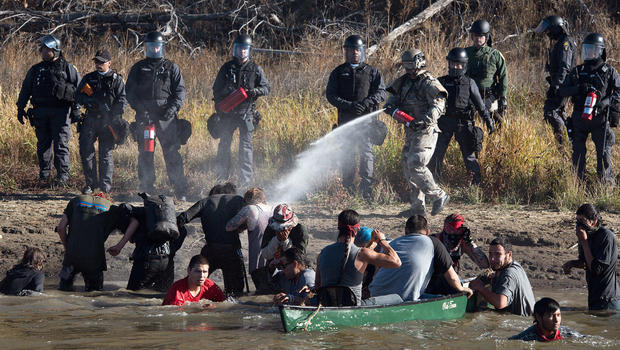 The Indian Reservation says the project poses a threat to water resources and sacred Native American burial sites. Violence has been prevalent throughout the protest as police in riot gear pepper sprayed and tear gassed protesters.

You’ve probably seen the crazy videos of the police spraying protesters with a water cannon on the evening before Thanksgiving, when temperatures dropped below zero.

Hundreds of people have been arrested and detained over their attempts to block construction of the pipeline.

Time will tell whether or not their efforts will be successful. (And it’s looking like they won’t be, as the company plans to proceed with drilling despite requests by federal agencies to delay construction.)

But as I mentioned last week, the reality is that this kind of investment is going to happen regardless of protests.

The same thing happened with hydraulic fracturing, a topic in which I’m sure you’re well versed by now. As you know, combining that process with the advances made in horizontal drilling has unlocked a vast amount of shale/tight oil and natural gas resources right here in America.

Granted, there have been huge protests over fracking across the nation over the past few years...

In places like Kern County, California, and in Florida, Texas, and Pennsylvania.

But it didn’t stop the shale boom from taking place, and even today, companies spend billions of dollars hydraulically fracturing their wells.

Of course, that has led to a multitude of investors — not companies — raking in millions

And now the same thing is going to happen with these new infrastructure projects.

Because just like fracking, there are going to be billions of dollars spent on the development of new infrastructure the moment Trump is sworn in this coming weekend.

Make no mistake; he will make sure these projects get the green light from his administration.

And THAT is the real story the media is missing.

After all, he’s personally invested in it. Nothing gets between him and his money.

That’s why I’ve put together this brief presentation for you today.

Because you see, for as long as Trump’s been running for office... for as long as he’s been invested in America’s oil and gas industry... I’ve been waiting to release these details.

I knew this day would finally come, just like I knew North America’s fracking boom would mint fortunes for early investors.

Stay tuned, because this story is only going to get bigger going forward.