The Stock Market Doesn't Care About Your Politics

The market doesn’t care about your politics.

You might hate the fact that “sleepy” Joe Biden is the president-elect.

You might think Trump is a wannabe demigod unfit to govern.

Does the market care?

Not in the slightest.

Decade after decade, brief drawdowns aside, stocks keep going up. Looking at the Dow’s 30-year chart, I would say we have a long way to go before the next significant bear market.

Here’s how it works.

After a long bull run, for any number of reasons, stocks hit the brakes. It starts with a warning sign (orange circles), perhaps an 8–10% correction. This is followed by a faux recovery fueled by a last-ditch effort from market latecomers chasing the gains fast movers banked before the correction. That last melt-up then kicks off a much more significant drawdown and pushes us into a bear market (red circles). Once we recover from the bear attack, the cycle starts again.

Of course, if you zoom in on these similar bear markets, the charts will start to look different, but as an investor who's looking to grow generational wealth rather than squeeze out a flash gain here and there, it’s important to always keep this greater trend in mind.

And what I see in this chart is that markets are technically poised for a long bull run — one that could last years.

Just because we have a long bull run ahead of us doesn’t mean you will be able to throw a dart and land on a winning ticker.

But it does mean there are life-changing opportunities all around us.

Today I want to introduce three sectors I’m turning my focus toward in order to locate these profit chances.

With a Democrat in the White House and a split Senate, there will be a massive infusion of capital into the clean energy and sustainability sectors. Global investing firm BlackRock estimates that over the next five–10 years, clean energy will grow into a $9 trillion industry globally.

Here in the United States, President-elect Biden has announced that he plans to inject upward of $40 billion to rebuild our energy infrastructure and put us on a path to net zero emissions by 2050.

Wall Street is already taking notice, and an easy set-it-and-forget-it play for the next 365 days is the iShares Global Clean Energy ETF (NASDAQ: ICLN).

For my money, I expect this ETF will outperform any traditional market index fund in 2021.

Now for the second sector.

No, I’m not talking about a stake in Utz as a pick-and-shovel play for the cannabis industry. I’m talking about semiconductors. I know — say the word, and the average person falls asleep. But real investors know semis are the market gift that keeps on giving. I like all of them except Intel. I want shares of AMD, Nvidia, Taiwan Semi, and more. Look at this chart, and you’ll see why. 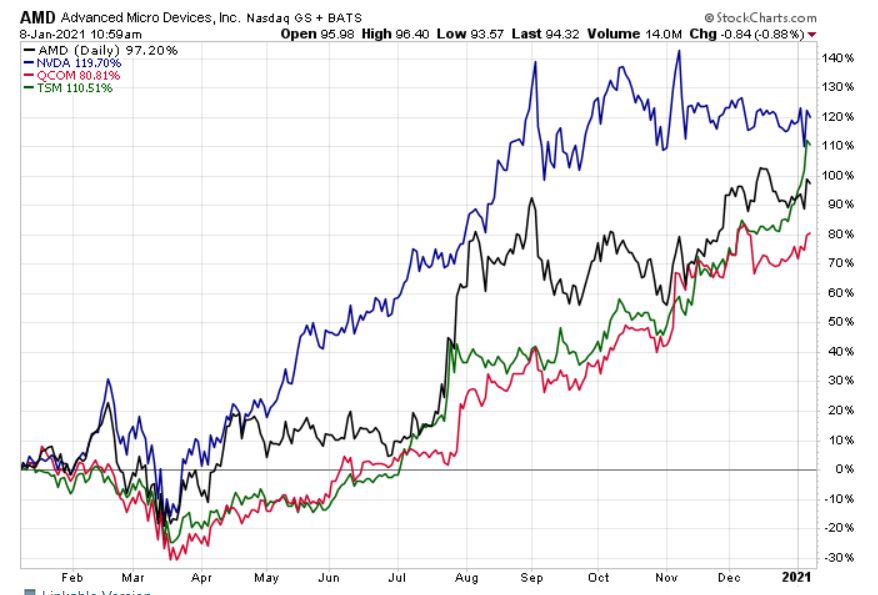 In the most basic terms, you can chalk up this growth to massive demand that should only increase exponentially.

Think about it. How many devices with some sort of silicone chip do you currently own?

I bet it's at least a baker’s dozen. If you’re a family of four with two teenagers, you might be pushing triple figures with the number of chip-driven devices in your home. And we didn’t even talk about your three cars yet.

This unparalleled demand will continue to power the chipmakers higher and higher. This is the way.

Now for the last sector.

The day I can directly invest in SpaceX is the day I may make my biggest investment ever. Space is the new frontier, and while the clichés may get old quickly, the truth is we’re back in the race to own space.

As we move from science fiction to reality, I firmly believe there will be a surge in the amount of viable profit opportunities. Many traditional aerospace companies are pivoting to space propulsion systems and other related technologies. That makes smaller players with successful operations in this area ripe for acquisition at premium prices.

AJRD shares jumped over 25% on the news.

I expect the rate of these mergers, as well as an increase in disruptive startups, to become a strong trend this year.

More on these sectors and the opportunities within in the coming weeks.

Have a great weekend.