The Slow Death of the Coal Industry

Nowhere in the United States will you find more ardent coal supporters than in Pennsylvania and West Virginia.

I witnessed this firsthand last weekend, passing countless highway billboards touting the need for our dirtiest fossil fuel as I drove through western Pennsylvania.

Unfortunately, the clock is ticking for the coal industry, particularly in West Virginia. It's bad enough that the state is producing 12.3% less coal so far this year compared to 2012, but now we can tack another developing crisis...

As it stands now, there are about 20 coal-fired power plants in West Virginia. By the end of next year, nearly one-third of these plants will be retired.

Of course, old age isn't a problem specific to West Virginia, something I've mentioned in these pages before.

The fact is most coal-fired plants were built more than thirty years ago, and nearly half of all existing coal plants are at least five decades old. Some are even approaching their 90th birthday!

That doesn't bode well for investors still bullish on coal.

But let's not make the mistake in believing that the United States will actually run out of coal any time soon. In fact, practically every forecast available has the United States using a significant amount of coal for decades to come.

What we do know is that the death of coal will take place in the electric power sector, where the U.S. uses it most. 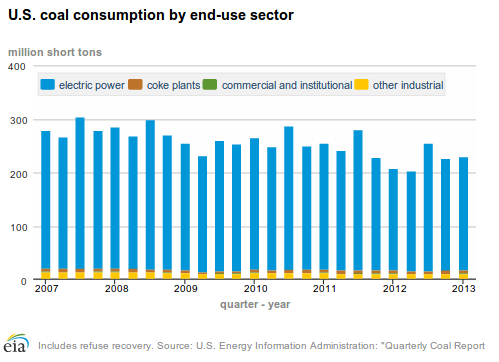 I'll even take it a step further and show you why the coal industry is doomed in these two states: 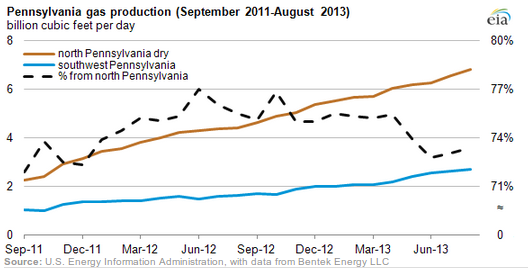 And as you'll notice below, this new gas supply is being directed towards one sector in particular (click chart to enlarge):

Don't worry, there's at least one good thing that will come out of all of this...

The death of coal is opening up a host of opportunities in the energy sector.

How to Play Coal's Demise

You see, the United States isn't the only country hoping to curb its exorbitant coal consumption by taking even more drastic steps than setting incredibly difficult carbon dioxide standards.

China, for example, is outright banning the construction of all new coal-fired power plants near three major industrial regions. The goal is simple: Cut the country's coal consumption enough so the fossil fuel accounts for only 65% of total energy mix (it's currently in excess of 70%).

One of the consequences, however, is the threat to U.S. coal exports, which have been steadily rising since shale gas emerged as a cheap, abundant source of energy during the last five years. 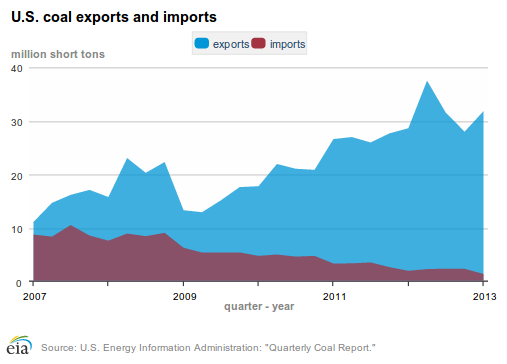 And although things don't look so bad when compared to the largest natural gas producers in North America, coal investors will cringe when going up against a real natural gas player...

My latest gas stock is no exception: 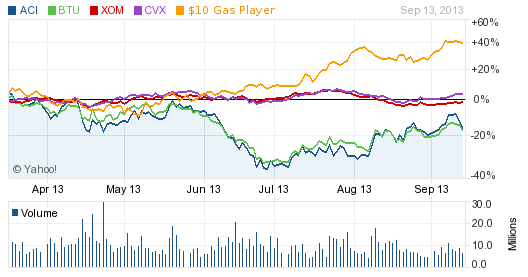 This $10 gas stock isn't your typical natural gas company in that it doesn't own a single acre of land in the shale gas patch...

And yet stands to return a small fortune to early investors.

Not only has this company outperformed the largest publicly traded coal stocks over the last six months, but it's also utterly embarrassed huge, integrated oil companies like ExxonMobil and Chevron that have dramatically increased their exposure to North American shale gas plays in recent years.

That's not to mention the fact that Exxon's massive market cap is 310x greater than this gas play — and yet it still fails to deliver for shareholders.

And what about the chance of natural gas prices plummeting due to surging production?

Should there be some cause for concern?

In fact, that's exactly why we're banking on natural gas... because the further prices fall over the next few years, the easier it will be to tap an even more lucrative market opening up as we speak.