The Next 25 Years of Gas Profits

The Line in the Sand for U.S. Gas Exports

Over the last few years, I laid out the bullish case for natural gas, and I'm wholly convinced it will become the dominant energy source in the United States within the next few decades.

That's because the past five years of developing unconventional gas resources has led to both record consumption and production within the U.S.

But why stop there? For the first 10 months of 2013, the U.S. was on another record-setting spree, producing 21.2 trillion cubic feet of natural gas through October.

What's interesting, however, isn't necessarily that production is in record territory, but that it's this high in spite of certain things — an ultra-low price environment and a staggering decline in gas-drilling activity, for instance.

Although it's certainly true that prices have rebounded considerably since falling to $2/Mcf levels during the spring of 2012, remember that gas prices have been relatively flat since plummeting in 2008. 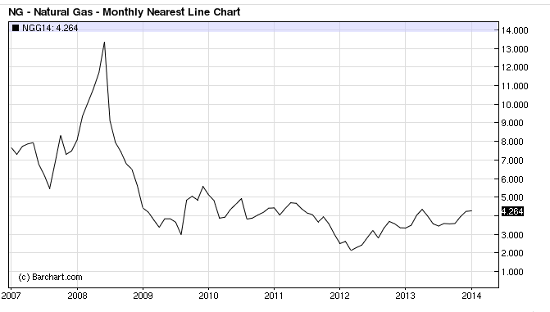 As you might expect, companies like Encana Corp. — one of the natural gas powerhouses in North America — are transitioning their production portfolios away from gas. Nearly one-third of Encana's 2014 production growth will be from liquids.

This isn't an anomaly...

Cheap gas prices had a devastating effect on drilling activity, forcing nearly every gas producer in the lower 48 states to focus on liquids production. 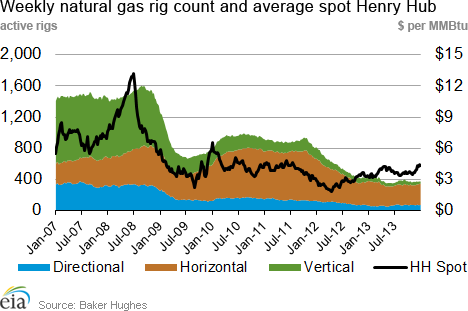 Is the situation finally turning to the upside?

Our Gas-Filled World: Export Scenario Ahead

With the exception of renewables, natural gas is the only source of energy poised for growth over the next three decades, with U.S. demand for natural gas expected to reach 31.6 trillion cubic feet in 2014.

Take it a step further, and you can see the EIA shows us exactly where this growth will happen between now and 2040... 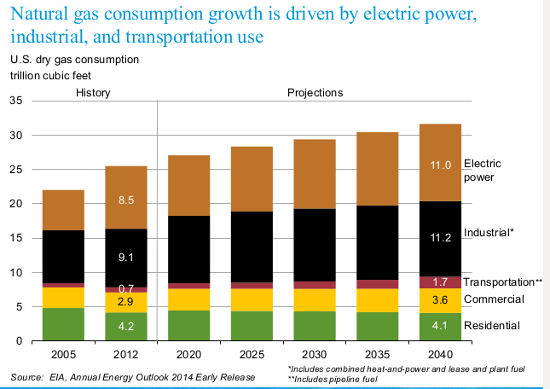 One thing, however, doesn't change: The industrial and electric power sectors will still account for 70% of natural gas consumption.

In the electrical power sector, the EIA expects the ultimate crossover from coal to natural gas will occur in 2035. This a radical change considering coal currently generates about 41% of the United States' electric power.

Personally, I think the EIA is wrong on this one.

Two years ago, I mentioned that the most overlooked fact in U.S. electrical generation is the amount of coal-fired plants slated to retire going forward.

This crossover wouldn't be such a major issue if over 90% of our coal consumption weren't in electrical generation!

That's a grim outlook no matter how you slice it.

I know the prospect of a multi-decade investment isn't everyone's cup of tea. It would make a few day-traders I know laugh uproariously. Fortunately, there are a few other gas opportunities on the horizon...

The U.S. is on pace to finally become a net natural gas exporter within the next three years. There are roughly 21 LNG export projects still seeking approval, and it wouldn't be shocking to see a number of these get a thumbs-up from the U.S. Department of Energy.

And yet, despite the media frenzy in 2013 on potential LNG exports from U.S. coasts, this is a sucker's bet right now.

Why? Not only does Canada hold a geographical advantage over the U.S., but rapidly growing shale gas production in the U.S. has led to even cheaper gas prices in Canada.

Of course, that's not to mention the gas crisis developing south of the border. And contrary to popular belief, liquefied natural gas won't be the biggest part of U.S. natural gas exports going forward...

Next time, I'll show you exactly where our gas will flow and how to capitalize on this burgeoning opportunity.