The Mecca for Marijuana Investors

A few months ago, I mentioned that marijuana sales surged to $6.7 billion in 2016.

If you think that’s a lot... don’t. We’re still in the early stages of this industry, and 2016’s haul is peanuts compared to the growth that’s in store.

As it stands now, here’s what the battleground map looks like: 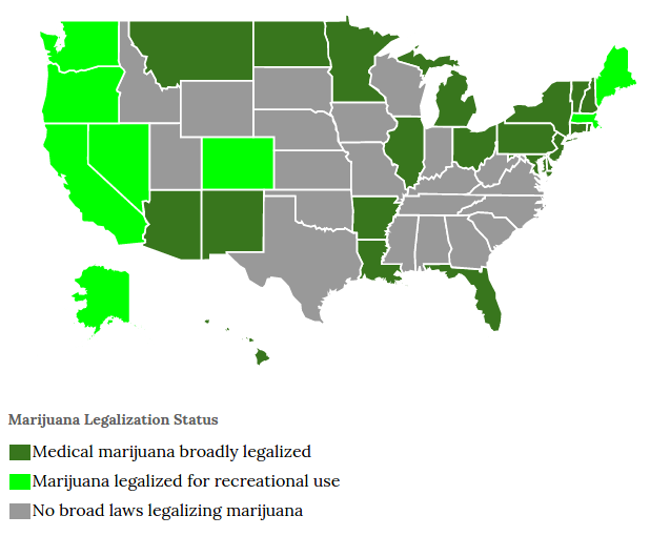 Be honest: Is there anybody who doesn’t see this coming by now? Regardless of your views on the matter, you can at least see the winds shifting.

Once the rest of the states watch how much revenue California legislators rake in taxing marijuana, there won’t be a non-green spot on the map above.

Back in 2014, marijuana sales in the U.S. totaled approximately $2.7 billion, with California’s medical marijuana industry accounting for just about half!

Today, California’s marijuana market is projected to be upwards of $5 billion once regulations are finally worked out.

The market in Los Angeles alone is expected to be worth more than $1 billion.

That’s about what the entire state of Colorado pulled in last year.

I’ve even read some estimates that suggest the legal cannabis industry inside the United States will be worth as much as $50 billion by 2026.

So you can see why it still feels like we’re in the early stages of this industry. The sheer volume of startups that have sprung up over the last two years is staggering.

Unfortunately, the average investor doesn’t realize that most of these will fail, which makes navigating the sector a little rougher.

You and I both know companies are going to continue to pop up all over the place to help satiate surging demand.

But I want you to think bigger...

One of the worst-kept secrets in U.S. history is that most people who went to California to strike gold in 1848 ended up broke... but not the merchants.

You would’ve made more money selling a miner his shovel and supplies than you would have panning in the creek beside him.

And that’s the way it is now, with an ever-increasing number marijuana companies hoping to capitalize on a runaway industry.

But like I also said last time, there’s a dirty, inescapable secret behind marijuana stocks.

Of course, when you’re a fresh young start-up trying to get the edge on your competitors, it would be tempting to cut corners.

For marijuana growers, however, there’s only so much you can do to avoid the exorbitant energy costs that are plaguing some companies.

In fact, energy costs can take up to half of a company’s operating costs if it’s not using LEDs.

Those that do, however, still aren’t in the clear.

One grower even said outright that even though his monthly electricity bill was around $4,000, his yield was actually lower after switching to LEDs.

I honestly don’t believe that most people grasp how big this market will become.

Right now, the growing operations for the legal cannabis market swallow up roughly 1% of the United States’ total energy consumption. In California, marijuana production took up 3% of the state’s energy output.

Just as during the gold rush in 1848, there will be a small group of people who will come out above everyone else.

Here’s a hint: They’ll be the ones fueling this marijuana boom.

Energy will become the holy grail for marijuana investors. Cheap energy. And you know as well as I do that there is a veritable energy war raging between our two largest sources for electricity.

The good part is that we already know who the winner will be, and over the next few weeks, I’m going to show you why one sector will inherit the spoils of a $50 billion cannabis industry.