The Market Cycle Says What?

The first house I ever bought was a 100-year-old row house for $75,000 in 1998. It sat halfway down a gray block with one tree in a Baltimore neighborhood on the edge of Federal Hill, which was quickly gentrifying.

Shortly after I moved in, it became clear that the clean-cut 18-year-old kid next door was a drug dealer. Loud music shook the windows. People came and went at all hours. There were fights, public urination, vandalism, and all the things people love about city life.

At the same time, due to falling interest rates, our monthly payment was just $100 more a month, despite the fact that we lived in three times the house. God bless America.

In 2007, everyone was house rich, and it was all anyone talked about. The more driven people told stories of buying and selling housing like tomatoes at a farmers market. Those who couldn’t be bothered to move used their equity as an ATM, buying up big trucks, time-shares, and all sorts of other shiny gewgaws.

They borrowed so much that people owned less of their house than ever in history. The personal savings rate went negative. Banks offered no-interest loans. They said this time was different. It was a new paradigm.

Of course, by 2008, things had started to fall apart. In January 2008, foreclosures jumped 57% year over year... By March the Fed had guaranteed Bear Stearns bad loans, and Freddie and Fannie were bailed out. In September, the Lehman Brothers bankruptcy caused a global financial panic not seen since the Great Depression.

Here is the classic psychology of a market cycle: 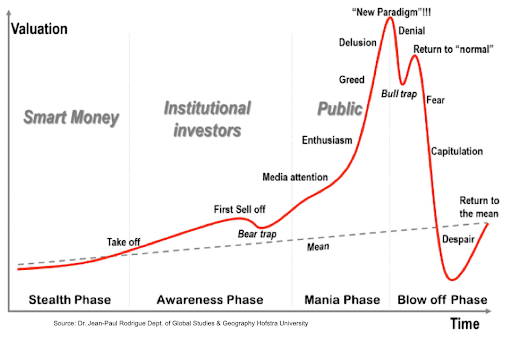 It is always difficult to tell where you are on this diagram, but I would argue that we aren't at the “New Paradigm” level, nor even at delusion or greed.

Heck, everyone is bearish. Everyone over 30 remembers the 2008 crushing sell-off. The bull/bear sentiment ratio is now 18 points below the zero line.

Ironically, you can’t have a market crash when everyone thinks the market is heading lower. That’s not how markets work. At the end of 2007, the ratio was 33 points above the zero line — record bullish. Pride comes before the fall.

As I told my Bull and Bust Report readers last week, the market psychology is far too negative for a major sell-off. Trade talks with China are priced in. Interest rates will be cut again. Everyone who wants a job has a job and got a raise this year.

The savings rate is 8.2%, which is the highest it has been in decades. Defaults and charge-offs are at decade lows.

Here is the chart of the S&P 500. It has consolidated for about two years. And yet every time the MACD (the bottom red and blue lines) have crossed below zero, it has been a buy point. We are just entering that phase now. 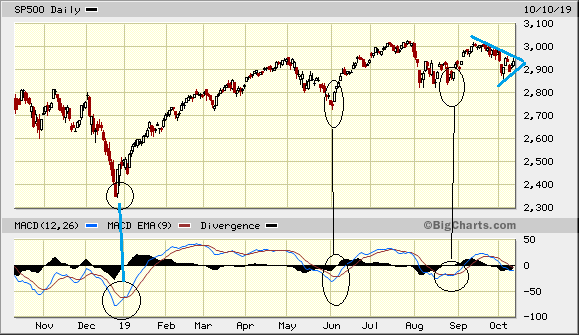 As is often the case, the market is uncertain. This is reflected in a pennant formation. If it breaks higher and moves to new highs, this will trigger a big upward move, as all of those now on the sidelines will jump back in for fear of missing out (FOMO).

We are now in earnings season. If numbers come in poor, the opposite could happen and the chart breaks down.

You have all the big Wall Street firms and banks like Goldman Sachs, Citigroup, BlackRock, and Wells Fargo reporting this week. We will also get Johnson & Johnson, Netflix, Alcoa, Philip Morris, Barrick Gold, and Honeywell, plus about 60 more.

After this week, the market will have a full sense of what is going on. There are upside catalysts in the Brexit deal, the China trade deal, Fed rate cuts, wage increases, and restocking inventory. The downside is a global growth recession.