Today, I want you to think bigger than just battery stocks.

Yes, I fully understand that Tesla purchases roughly 3.8 GWh of lithium-ion battery cells every year from Panasonic. Those cells are sent over from Japan and assembled at Tesla's California factory.

However, the company's Gigafactory is a game changer — and everyone knows it!

Within five years, the company expects to produce approximately 50 GWh in annual battery production. If production begins in 2017, it should only take about three years to reach full production.

Panasonic may have its benefits from supplying Tesla's Gigafactory, but you'd be hard-pressed to find another solid battery stock after Musk's expansion into the energy storage market.

Take your pick: Samsung, LG Chem, GS Yuasa... all of them will be directly competing against Elon Musk, and that's not a good side to be on.

Besides, there's a much better place to bank your first 10-bagger...

First, I want you to understand that the real opportunity in Musk's energy revolution can be summed up in one investment mantra: supply, supply, supply!

It really is that simple.

Two weeks ago, I told you exactly what would fuel Elon Musk's lithium revolution. And after watching Tesla's shares explode over the last five years, individual investors like us that didn't buy back then can't help but feel as if we've missed the boat.

Had you put a dime in Musk's company three years ago, you would be smiling all the way to the bank: 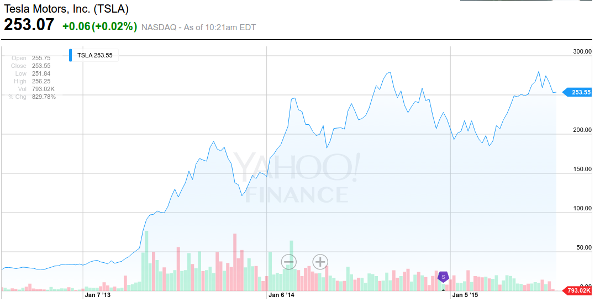 But like I just said, I want you to look beyond battery stocks.

The bottom line for finding the right lithium play may come down to one crucial factor: location.

And the best part is that we already know the answer to where Tesla has set up shop.

Last year, the company broke ground on a site outside of Reno, Nevada.

It also has lithium producers in the area in a feverish frenzy. On July 15th, Albemarle Corp. shelled out $6.2 billion in cash and stock for Rockwood Holdings — the largest lithium producer.

The lithium market always reminds me of oil. Just as a handful of national oil companies control an overwhelming amount of the world's crude supply, so too do a small group of lithium producers control the global lithium supply.

Just four companies account for 90% of the lithium market!

I know that sounds daunting for smaller companies hoping to get a piece of the action from Tesla's Gigafactory — at least, until you take a deeper look into this situation.

When Tesla announced it purchased 1,000 acres outside of Reno in 2014, my excitement over potential lithium plays surged. However, that bullishness soared even higher as Elon Musk tripled Tesla Motors' land holdings in Nevada over the past few months.

Yet even as my excitement grew, let me be perfectly clear — it wasn't over those four mammoth lithium producers.

Musk has said it plain and clear: He'll be giving priority to these North American lithium companies.

And although major North American lithium producers like FMC Corp. (NYSE: FMC) and Albemarle (NYSE: ALB) are in limited talks to help supply lithium to Tesla, there's a much more lucrative opportunity out there.

Maybe it's time you jumped on board of the runaway bull market for lithium.