Editor's Note: For more information on the topic, check out our updated resource page on natural gas companies...

We've talked about a stronger outlook for natural gas a lot recently. And we have good reason to expect those natural gas profits to flow within the next year...

Our domestic gas production has never looked stronger than it does right now.

The emergence of shale gas over the last six years has fueled our hopes that we'll be able to safely transition away from our oil addiction.

Not only do we have an abundance of it trapped in the various shale formations across our country, but developing that resource is inevitable, because we're not the only ones counting on that future supply...

You see, it's not just the United States that's depending on U.S. gas production. Remember Canada's trouble with peak natural gas?

It turns out natural gas exports to Canada have doubled in just five years!

We may be relying heavily on an ever-increasing amount of Canadian crude to meet our oil fix, but Canada's natural gas troubles will only worsen as production from the oil sands grows to more than five million barrels per day in the coming decade. (Natural gas plays a vital role in the extraction process of deeply-buried bitumen.)

As if that weren't enough, Canada isn't the only country crossing her fingers for more U.S. natural gas. South of the border, Mexico is also relying more on our supply.

U.S. exports to Mexico have also jumped significantly. Prior to 2000, we barely exported any natural gas to either Canada or Mexico. Today's a different story.

Just like Canada, Mexico can't get enough of it:

Of course, we all know the tragic tale behind the Mexican oil industry's fall from grace. Mexico's Peak Oil crisis began with the death of the once-mighty Cantarell field.

Demand is on the rise, too. Analysts have reported some of their power plants are being set up to run on natural gas instead of coal or oil. Mexico's demand is expected to jump more than 50% to 1.3 Bcf/day this year, then potentially grow to 1.5 Bcf/day in 2012. Pemex currently makes up about 40% of the country's natural gas consumption.

The Ban You Won't See

Right now, there's a veritable blitzkrieg in the media over the hydraulic fracturing process. The problem is they've waged this PR war over rumors.

Don't think it's getting out of hand?

Just look at the latest ban on hydraulic fracturing in New Jersey...

After the bill was signed by the governor, it became official: The use of hydraulic fracturing to explore for natural gas has been banned in the land of traffic circles and no left turns.

The odd thing is I can't recall anyone even trying to do so. I'd be quick to poach a chart from the EIA to show you New Jersey's natural gas production, but it would be a long, flat line at zero.

At the very least, the Garden State could've waited for the EPA to conclude its study into the relationship between hydraulic fracturing and drinking water resources before instituting a ban.

The smart money knows that unless the EPA comes back with extremely damning evidence, the chances of a ban on hydraulic fracturing happening in the United States are as likely as New Jersey becoming our leading natural gas producer.

Besides, savvy investors are already preparing for the Marcellus explosion.

Last year, natural gas production from the Marcellus averaged 1.3 Bcfe/d. By the start of 2011, production was around two billion cubic feet per day. And this is only the beginning.

Within the next eight years, production is expected to jump more than 775% to 17.5 billion cubic feet per day. In the process, it'll add at least 250,000 jobs and tack on over $20 billion in revenue to Pennsylvania's economy.

We're also expecting the drillers to have a field day. Even though natural gas prices have been lackluster since crashing in 2008, drilling more than doubled in 2010. There are more rigs drilling the formation than ever before: 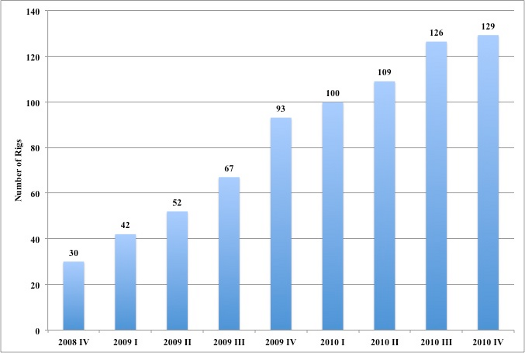 Although you may be hesitant to jump in after yesterday's bloodbath in the markets, there's no better time to buy natural gas than right now.

A good place to start looking is Range Resources. The company has more than a million net acres in the Marcellus, steady production growth over the last seven years, and expects to grow another 30% in 2012.

Energy Crisis Coming
About a month before I took a 30-hour trip to Ulaanbaatar, I flew Ethiopian Air to Nairobi, Kenya. Upon arrival, I discovered two things: Successful Somali pirates were buying up all the real estate in the nice part of town, and...
Canada's First Oil War Erupts
Canada has become one of the very few countries left with a strong outlook for oil production. Not only is their oil production secure, but you don't need a map and your fourth grade geography teacher to tell you it's much less volatile than Saudi crude... Keith Kohl tells readers where the smart money is being played in the Canadian oil sands.
Preparing for the 2012 Natural Gas Rebound
Editor Keith Kohl explains why investors are preparing for a natural gas rebound in 2012.
The Safest Oil Profits in Today's Market
The scary secret behind U.S. oil production... and how investors can find safe oil profits in today's market.
Hydrogen Fuel Cells: The Downfall of Tesla?
Lithium has been the front-runner in the battery technology market for years, but that is all coming to an end. Elon Musk is against them, but Jeff Bezos is investing heavily in them. Hydrogen Fuel Cells will turn the battery market upside down and we've discovered the tiny company that is going to make it happen.