So You Want to Make Money From the Death of Coal...

Last week we talked about the death of U.S. coal and a little bit about why we can blame the French for our coal addiction.

I also mentioned that there was one major winner in this downward spiral: electric power.

It’s not too much of a stretch to say that the veteran readers among you saw this coming for more than a decade, ever since the shale gas boom caused natural gas prices to implode.

Like I’ve said before, cheap, abundant natural gas was the death knell for U.S. coal.

But the situation for the industry is far worse.

Just look around you and you’ll see why…

Although it’s true that much of the world still lusts after coal power, the sector is certainly on its last legs here in the United States.

When you look around at the coal power plants that stretch between our two coasts, what do you see?

Well, taking a stroll through Oregon, you’ll find the Centralia power plant, which operates with a capacity of 1,460 MW. You might even notice the 7.84 metric tons of CO2 emissions it emits each year.

If you’re heading east, you won’t hit much of a concentration of coal plants until you cross over into Indiana, where the Gibson generating station is running with a capacity of 3,340 MW, pumping 17 metric tons of CO2 into the air annually.

Of course, by the time you're cruising along I-95 in Maine, you may have even breezed by the Rumford Cogeneration plant, which is tiny in comparison to the other two plants and only has a capacity of around 85 MW.

Soon, however, those plants will be ghost towns.

The Centralia power plant is already in the process of closing down and will shut its last unit in 2025.

And that, dear reader, is an event that is occurring all across the lower 48 states.

The Jim Bridger steam plant in Wyoming will be closing out its existing permits, contracts, and other agreements just two years from now.

Take a look below: 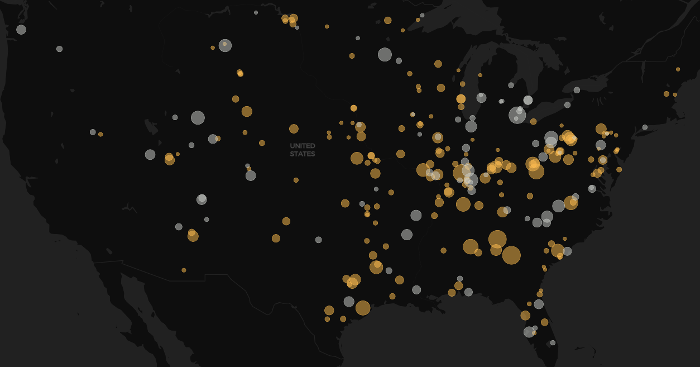 This is a map of all the coal plants in the U.S. in 2019 and includes every plant that was closing at the time (gray), in operation (yellow), under construction (pink), or even just planned (in purple).

There are two things you should immediately notice right off the bat.

And when you do, you’ll see exactly why the power sector is going to present investors with an incredibly lucrative opportunity going forward.

So what did you notice?

Well, first, it should be clear as day that a significant number of coal power plants in the U.S. are closing down.

It’s not a mystery as to why, either.

If you walked up to the Centralia power plant, you’d see a sign that says something like “Opened 1972.”

Granted, the Gibson power plant isn’t much younger, having opened around 1979.

In fact, the average age of a U.S. coal plant is well over 40 years old.

That brings us to the second most glaring part about that map above.

Since the map is color coded, you’ll see a distinct lack of pink and purple dots on the map.

Not only are our current coal plants dying of old age, but we’re not building ANY new coal capacity to make up for it.

I’ve seen some ugly charts in my time, but this one is near the top: 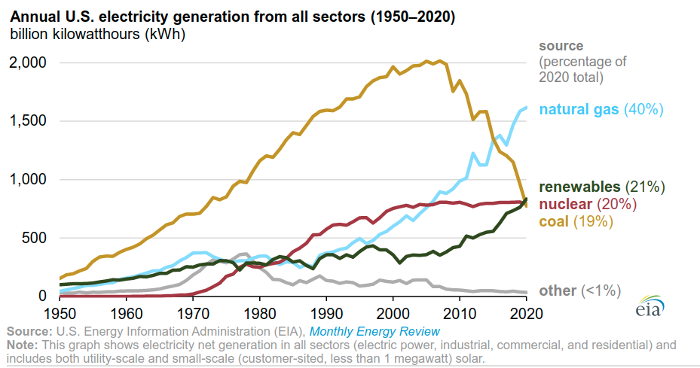 For the first time, renewable energy has become the second-largest source for electricity in the United States.

Again, those of us who foresaw the collapse of U.S. coal a decade ago aren't shocked by this accomplishment.

It’s not just renewable energy like wind and solar that will perform the best when the coal industry is finally buried underground.

In fact, the true winning sector is a new twist on an old technology.

And it’s something that has provided us with the most stable source of electricity over the last 30 years.

Well, go ahead and take a look for yourself.