That's been the story behind our oil and gas boom for the past five years. And if we include the steady, long-term decline in conventional production, shale plays have been the only story worth following for investors.

Our natural gas industry has had eerily similar experiences. Earlier this week, I mentioned how the flood of shale gas is the reason natural gas producers have been so successful (the EIA's production data supports as much).

But it's not enough to simply recognize that natural gas prices are making a comeback, or that major players like ExxonMobil are paying a hefty price for their own piece of the shale profits...

For individual investors, knowing the difference between the various shale formations is critical when separating the good, the bad, and the downright profitable.

The Good, the Bad, and the Downright Profitable

We can pinpoint the start of the shale boom with a technological breakthrough George Mitchell used to tap the Barnett shale play back in the 1980s...

In case you were wondering, this is what started it all...

However, low-price natural gas environment has taken its toll. Below you can see how production declined in 2012 for the first time since 1993, as did the number of drilling permits issued throughout the year (click to enlarge):

Despite hitting new production highs in 2011, the Barnett's success led a rush for companies to develop new shale plays across the lower 48 states — including a shale play sitting over 200 miles directly east of Fort Worth...

If you had a dime in shale investments back in 2008, you would have made a solid profit on companies drilling in the play. The buzz over the Haynesville rose at a feverish pace.

Output quickly skyrocketed as drillers frantically tried to extract the 60 trillion cubic feet held tightly within the rock... and they were extremely successful.

According to data from the Energy Information Administration, the Haynesville overtook the Barnett as the country's highest-producing shale gas deposit back in March 2011: 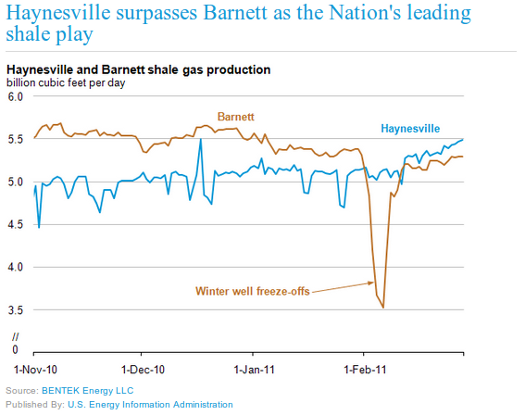 Unfortunately, 2013 is shaping up to be a frustrating year for Haynesville operators. It's next to impossible for output to increase after watching drilling activity diminish over the last year. 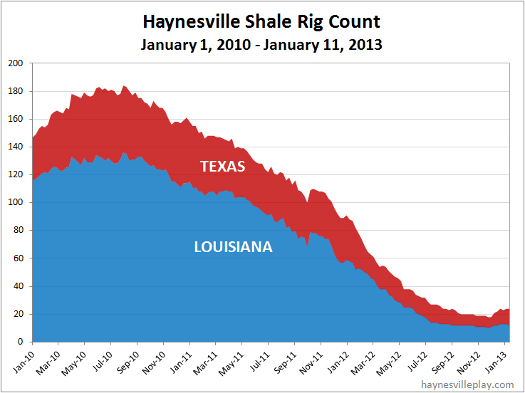 In the wake of sub-$4 natural gas and crude oil holding steady around $90 per barrel, companies are moving to more liquids-rich targets like the Eagle Ford play in South Texas.

Is that it for the shale gas boom?

We've been talking about one formation in particular that has the legs to last.

Even though prices are cheap, the Marcellus Shale is still one of the hottest unconventional plays in the U.S. — and that's taking into account the drastic cut in estimated reserves from the EIA.

This formation stretches across five states, from New York to West Virginia, with the vast majority in Pennsylvania. 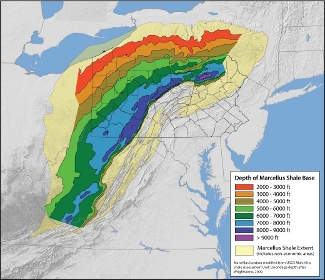 Between Pennsylvania and West Virginia, companies produce about 7 billion cubic feet of natural gas per day. At this rate, Marcellus production from these two states is roughly one-quarter of our U.S. shale gas production — and has more than doubled since 2011.

Although drilling activity is also at a two-year low, that won't deter some of the bigger players from spending cash developing their Marcellus assets...

CONSOL Energy is directing two-thirds of its 2013 spending on coal and gas investments on its Marcellus operations.

A 2012 report from Standard & Poor suggested the Marcellus Formation held nearly half of the proven natural gas reserves in the United States.

The Tools to Profit

Easy: We stick with the what works.

In this case, it's finding the right shale play at the right time — at least, that's what some of the wealthiest investors are doing.

That much should have been obvious when billionaire investor Carl Icahn took an 8.9% stake in Chesapeake Energy, making him the second-largest shareholder at a cost of $951 million.

The Government Said I Lied About the Bakken
In January 2008 I commissioned my research staff to investigate and to produce a report on the Bakken. I gave them two months to give me their findings... They did it in one.
A Flood of Unconventional Gas
Editor Keith Kohl explains why shale gas production is the key to our cheap, abundant alternative to crude oil.
Bullish Gas Investments
Energy and Capital editor Keith Kohl reveals to investors the must-own natural gas stock for 2013.
The Boom and Bust of U.S. Oil Investing
Keith Kohl unearths the backstory of the upcoming oil crisis brewing in Alaska's North Slope.
Hydrogen Fuel Cells: The Downfall of Tesla?
Lithium has been the front-runner in the battery technology market for years, but that is all coming to an end. Elon Musk is against them, but Jeff Bezos is investing heavily in them. Hydrogen Fuel Cells will turn the battery market upside down and we've discovered the tiny company that is going to make it happen.