The Russians are buying gold.

In October, Russian gold buying spiked as it added 1.4 million ounces of gold to its reserves, or around 48 tonnes of gold.

The world mines 3,200 tonnes of gold per year. That means Russia bought 1.5% of annual gold production in one month. This is the largest purchase since 1998.

The word on the street is that Russia, which was purportedly anti-Hillary but is, in fact, pro-chaos, wanted the American election to look like a mess, and it succeeded. America is now divided and weak.

That said, if Hillary was elected, the relations between the two countries would sour. Therefore, Russia has sold dollars and bought gold as a hedge against the U.S. election.

If this is/was true, it would be logical that Russia would ease up on buying in November and help drive down the cost of gold. And, in fact, we have had a sell-off in gold.

As I have written in previous articles, my gold plan is to buy the current dip over the next two weeks and ride gold up on the post-Fed rate hike, which will be announced on December 14 at 2:15 p.m. EST.

That's because gold went up the last time the Fed raised rates: 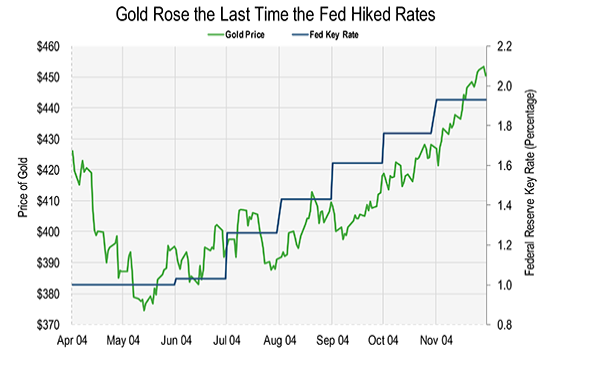 According to historical data, gold sells off going into a rate hike but moves higher in conjunction with rates.

This is based on the simple fact that the Fed is always late in its moves. By the time the Fed recognizes inflation, inflation is here. When it sees a bubble, the bubble has popped.

China is also selling the dollar ($160 billion in Treasuries over the last two years). 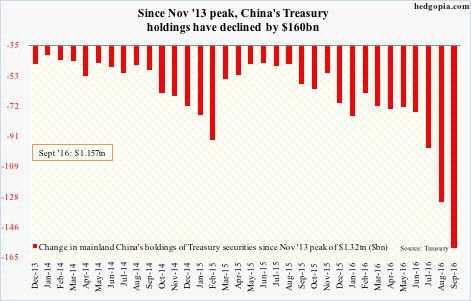 And it continues to buy gold.

In other words, the global fundamentals are bullish on gold. Much of the sell-off (down $120/oz.) in the past month had to do with a Trump victory and fear driving the dollar higher. This is overdone, as the dollar is almost at highs we haven't seen since the 2009 market implosion.

Furthermore, India has instituted a cash ban and spread rumors of a gold import ban. The irony is that the cash ban drove the price of gold up to $2,200 in India. Furthermore, the import ban has since been denied. For these reasons, coupled with a decade-long trend line, we are close to a bottom in gold prices. 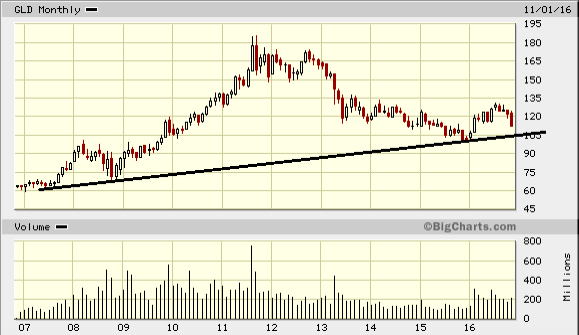 And as I said, two more weeks of selling off, and we hit that trend line on the day they raise rates. Look for a 15–20% gain going into the first quarter of 2017.

Obviously, select gold miners will do much better.