In the short term, buying gold paid off, even though it was a predictable reaction for the soft-headed. It was a conga line of the brain-dead and spineless shuppets.

But ever since, gold and gold stocks have been dead money. It's why our natural resource expert, Luke Burgess, has pivoted to other commodities like oil and gas, phosphate, and now tin.
Retreating into gold as a safe haven was always a sucker's bet.

I told my entire company and our readers to buy the crash in March 2020. I was met with skepticism. But I kept to my guns, because I’ve been through a few catastrophic crashes in my career.

What has happened since?

This is a chart of the Dow versus gold stocks in 2021.

And our performance and advice in these very pages prove why you continue to read us day after day.

We’ve made great calls in the past 12–24 months on a wide variety of different companies in different industries.

We’ve had record-breaking options profits, from Starbucks to semiconductors, from our emerging ace trader, Sean McCloskey. Sean also killed it in the options space with oil and gas.

We’ve prophesied the flourishing of new medical treatments and technologies, from psilocybin to genetic engineering.

But most impressive of all, our energy plays outperform anything anyone else is predicting.

Take a look at this chart of oil and gas stocks versus gold stocks for the past 12 months: 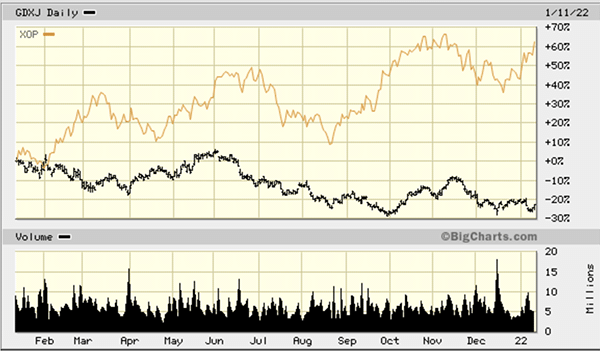 Gold stocks are off to a horrible start in 2022 — already down nearly 7% year to date.

Oil and gas stocks? Up nearly 10% in 2022. They'll only get better as global economies continue to reopen after the idiotic and catastrophic lockdowns. It will be energy that leads the way.

And we are the “go-to” research firm when it comes to all things energy.

Starting off our list at No. 10 is Matador Resources, which Keith Kohl at Energy Investor sold last June for a respectable 60% gain.

Matador Resources is an oil and natural gas company that operates primarily in the southwest United States. Of special note, it focuses a large part of its efforts on the Delaware Basin lobe of the Permian Basin, a huge oil reserve we’ve discussed before in Energy and Capital. It’s no surprise Matador made these gains as the oil industry recovers from the collapse in demand due to COVID and the Permian leads the return of U.S. oil production.

Sold on September 17, the ETF grew thanks to widespread interest in uranium mining and the nuclear industry. As small modular reactors continue to develop, the field is only likely to expand. That is why Global X is only the first of several uranium plays to make this list, but we’ll get to those later…

Energy Fuels, a play from Alex Koyfman’s Microcap Insider, is yet another uranium mining company. Coming in at No. 8, it earned a 146% gain.

Sold on January 8, 2021, Alex started the year off right with a gain of about seven times the previous year’s market average. It’ll be interesting to see whether we return to Energy Fuels, as we’ve discussed that uranium isn’t going anywhere. The company also mines vanadium and is breaking into the rare earth elements market, which would allow it to take advantage of growing demand for electric motor and battery technology for EVs.

Another play from Jimmy Mengel’s The Crow’s Nest, Orocobre Limited earned those readers who joined him in this venture a whopping 196% gain last October.

Orocobre focuses on lithium mining in Argentina, which carries with it the prospect of greater and greater profit as the world’s hunger for lithium-ion batteries only grows. On that note, please keep in mind that we’re not done with the company. Energy Investor's Keith Kohl, who first advised buying shares of Orocobre several years before Jimmy, is still holding on to the company at a current gain of 436%.

Sean McCloskey at Naked Trades played the options game and played it well, earning 206% and 208% respectively on two back-to-back Chevron calls last October. That puts him in an enviable sixth place on our Angel Energy Top 10 list.

As these wins demonstrate, while Sean doesn’t break into energy often, when he does, he’s very successful.

Another uranium mining company, Uranium Energy Corp. focuses its efforts on the southwest United States. UEC boasts control of a huge database of historic uranium exploration to assure that the projects it acquires have a lot to offer. Less than a month ago, it acquired Uranium One Americas and is now the largest uranium mining company in the U.S.

Fuel Tech specializes in emissions control for power plants and other polluting energy technologies. An essential part of today’s energy infrastructure, Fuel Tech assures that the air we breathe remains safe for us even as we keep the lights on. This is one of the important things to remember when investing in the energy industry and the reason why Fuel Tech made it to No. 4 on the list — it’s not just about investing in power plants or mines. There is just as much profit to be made in the background technologies and supporting innovations that make our energy infrastructure possible.

The third of Alex Koyfman’s recommendations to make it on the list, Microcap Insider made three different plays on Graphene Manufacturing Group last year, the highest of which made a 306% profit in a little over a month.

Graphene Manufacturing Group manufactures battery-grade graphene and produces its own state-of-the-art graphene aluminum-ion battery. This kind of technology will be essential to the future of energy as we move toward EVs and large-scale storage of renewable energy. GMG also makes other products, such as lubricants, coolants, and coatings, that help make sure energy production runs smoothly wherever it’s happening.

Another Jason Simpkins and Wall Street’s Proving Ground play, Skyharbour Resources is the final uranium mining company on this list and came in second place of all energy plays last year with gains of 311%!

As Jason wrote several months ago, there’s no way the U.S. or any other country can meet its climate goals without nuclear energy. This need and other factors, such as the numerous nuclear projects currently in development, raised the price of uranium over the last year. Skyharbour, which currently holds 14 uranium mining projects in the Athabasca Basin of Canada, was in the perfect position to profit. And if you were smart enough to join Jason, so were you.

Topping it out in first place, the most lucrative energy play from Angel Publishing this year was FuelPositive. Recommended by Alex Koyfman in First Call, the company earned his readers a 757% GAIN! That’s over twice the profit of even the second-place energy pick!

First Call has been reporting on the revolutionary power of green ammonia fuel to upend transportation and agriculture as we know it for months now. Producing no CO2 but able to work within existing transportation infrastructures and internal combustion engines, FuelPositive’s tech has rightfully earned back incredible rewards for the investors who trusted in it. But despite the fact that many industries and governments are starting to bank on ammonia, almost no one in the mainstream media is discussing the role it has to play in making a greener world.

That’s why Angel Publishing and its newsletters are essential to any informed and intelligent investor.

Eating What I Cook

Three months prior to buying Exxon, I purchased 1,000 shares of MLPX for $17.63, a master limited partnership that’s super-diversified in oil and gas. But I specifically bought MLPX for its pipeline exposure to the Permian Basin.

It hasn’t disappointed. Today the stock trades for nearly $32 and yields nearly 9%. When I bought it, it was yielding a dividend in the midteens.

Oil and gas will continue to reward investors, but we have more — a lot more — in our investment pipeline in 2022. And it’s exciting as hell.

The wolves are at the door,