Nothing to See Here, Move Along...

Written by Christian DeHaemer
Posted May 12, 2020

I’m off my rocker, gone stir crazy, out of my tree. Nothing does it for me, not whiskey, not reading, not TV, and certainly not the stock market.

A few days ago, the Governor of Maryland “Lockdown Larry Hogan,” lifted the pinky of his left hand, and out of his kind benevolence permitted us to go outside.

Hogan opened parks, beaches, sidewalks, and random corners of parking lots next to the handicap areas. Now, you can sit in your minivan with the tailgate open and chat with, up to, but not more than, nine friends as long as you’re wearing a facemask –– and they're required to sit in their hatchback, in a circle not exceeding 47 feet, as long as they aren’t blocking a crosswalk

In other words, boating is back on the menu. And as I happen to live on an 800-acre reservoir, and my mad pack of children are home from their university, school, (and even the 20 something with a shared apartment) for the next forever, with nothing to do and no one to do it with. I made an impulse buy of a 1968 Folbot Cayak, off of Facebook Marketplace, from a short guy named Carl who lives outside of Philadelphia.

Somewhere back in the hazy, cobwebbed recesses of my mind there lingered a strong desire, for one of these boats established from a Boys' Life magazine daydream, in 1975.

Two hours of driving up 95, we met Carl, in a facemask non-handshaking sort of way.

The good news was that there were no tollbooth people on the highway to take your cash. The bad news was I’ve never seen more cops on 95. The worse news was that asshats were slicing lanes, racing each other at 100 plus, full-on afterburner. Lots of them. All the way up.

It took three hours, to drive the two hours home because a Fulbot Cayak, is a beast when face down on top of an SUV. We drove 49 mph, from Philly to the South of Baltimore on I-95. That’s something.

When I got home, my children berated me because I picked up a latte at Starbucks.

Nothing to Fear, but

I’m not sure how this ties into the stock market. But, you get what you pay for here at Energy & Capital. I dispense my wisdom for free. Talking about, antique sailing kayaks is about as valuable as talking about stocks these days.

I mean, what the hell is going on?

Do investors not see the depression era numbers in unemployment, productivity, debt?

I guess all those financial books, I’ve read for the past 30 years are wrong. It seems that inflation isn’t a money issue at all. It is just a malaise that happens to some societies when they run out of bananas. 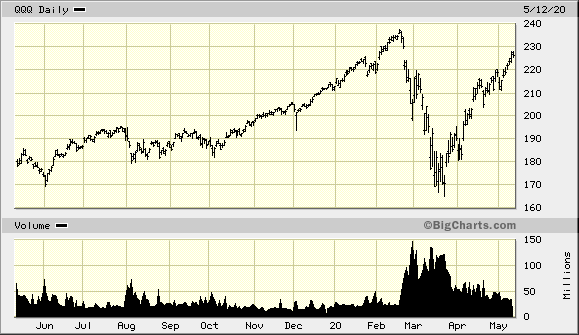 Above is the chart of the big cap tech stocks, the triple Q. It is up 36% in two months. It came back and filled the gap left from the downdraft, in February. This is because the entire service economy died. It’s the old Wall Street mantra “Buy the horrible news and uncertainty!"

No, no one says that.

Perhaps stocks will hit new highs based on money printing and hopium...

I have no idea. I’ve given up. Rational thoughts no longer apply. There was a time when creating money out of thin air was bad, much less creating $6 trillion or 25% of GDP, would have launched some bond vigilantes.

There was a time when 30 million unemployed was bad.

One might think a new cold war with your largest trading partner, China, might be bad for stocks. Not to mention, a hundred thousand new dead bodies packing the morgues.

But no, it appears that these things are good for stocks. Our thinking has been all wrong.

It’s not a “Broken Window Fallacy” it’s a broken window truthfulness. We need more broken stuff and more money printing. Forgive all the student debt. Bailout the universities. Give $2,000 a month to all the folks. A trillion for the airlines –– billions for Ford, Hudson, and Studebaker –– more for Carnival Cruise Lines and Blackrock.

Bailout Chicago, Detroit, and West Cucamonga. Heck, all those municipal employees are good hard-working people. People like money and the Fed can just print it! Let's give the people what they want. It will be fine...

Bah, I’ve had it. I’m going sailing. My kids can stay at home. As for the stock market, I’ll be back in October, when there will be something to buy.