There are plenty of battery technologies out there today, but lithium takes the cake in terms of popularity.

You can find lithium batteries in nearly every rechargeable device inside and outside your home. Heck, if you’ve jumped on the Tesla bandwagon, they’re already powering your home!

But with all this popularity comes some well-deserved skepticism.

After all, there are new battery designs coming out every day, and one of them is bound to take the top spot away from lithium-centric batteries eventually.

Right now, the biggest contender is a technology we’ve been using for years that’s got much of the same power but not half as much hype as lithium...

Right alongside the influx of new all-electric vehicles has come a wave of hydrogen-powered transportation options.

Big-name car companies like General Motors, Toyota, and Volkswagen are developing and marketing their own hydrogen EVs, some of which could be out in the next few years. UPS is also testing its own hydrogen delivery trucks and hopes to have a fleet operating across California soon.

Proponents of this technology note that hydrogen is more common than lithium by a long shot — it's literally the most abundant element in the universe — and that it produces energy just as cleanly, since the only end products of burning hydrogen are heat and pure water.

On this news alone, plenty of people are asking why they should bother with lower-mileage, high-priced lithium cars at all!

Well, looking at transportation alone, the problem is simple: the most common element on the planet is actually pretty hard to capture and store in a useful way. The gas has to be pressurized and held in large steel tanks, 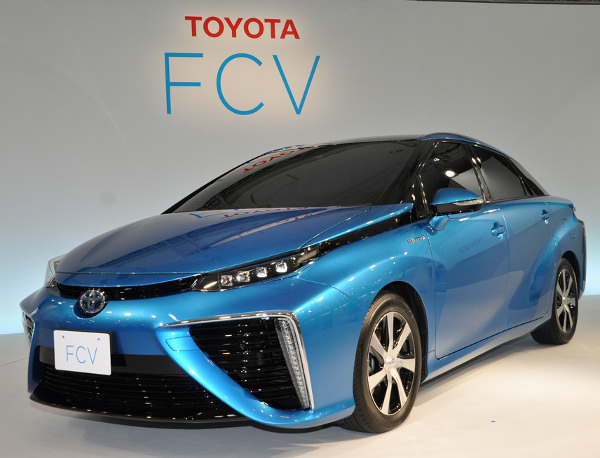 which take up far more space than an energy-equivalent tank of gasoline.

This may be why there are only 35 commercial hydrogen refueling stations in the entire country. Even worse, only three of those are outside of California. Seems this state gets to have all the clean driving fun.

And this hassle is nothing compared to what it takes to produce the pure hydrogen for these cars. Hydrogen is abundant, but it is often mixed with other gases. It can be separated out of other fuels like propane, methane, and natural gas using a reformer, but this process in itself produces emissions, and it is a very slow process at that.

But that’s just for larger applications, right? What if you only needed a little bit of hydrogen?

For instance, Apple patented a hydrogen fuel cell battery design for the iPhone just a few years ago. Surely that would be much easier to handle than a whole car battery.

Except that it has yet to come to anything, and patents are as far as Apple has gone.

See, in addition to needing a slow-to-make fuel, hydrogen batteries are also pretty dense. The mechanism that makes the process work is bulky. Your phone would need to have a place to hold the pressurized hydrogen, and you’d need to refill it wherever you could.

Then, of course, you’d have to dump the collected water, or else your battery would be leaking all day.

Not my idea of a sparkling, high-tech device, honestly.

A Problem for Future You

So, can hydrogen fuel cells really give lithium batteries a run for their money?

Not just yet, dear readers.

For large-scale applications like commercial vehicles, it's going to take a lot more investment into refueling infrastructure and some improvement of the battery design to get this segment of the EV market off the ground.

It’s just too easy to buy a converter and plug your car in at home for most to bother driving miles at a time to find a single hydrogen gas station.

For smaller applications, the developments are ongoing as well.

We just can’t have phones that leak water every minute they’re on; most of us have learned firsthand just how badly electronics and water get along.

Plus, if you’re worried about your lithium battery exploding, you probably don’t want to imagine how much more of a problem that would be with a mini pressurized tank of explosive gas in your back pocket.

But it’s a work in progress, and one well worth an investor’s attention.

Hydrogen fuel cells have a lot of benefits over lithium, not the least of which is simply how fast they charge.

It’s already being proven in existing hydrogen cars: 10 minutes at a fueling station beats an hour at an electric charger any day! And the energy density of a hydrogen fuel cell can reach more than 200x that of a standard lithium battery.

As such, hydrogen cars also have ranges comparable to regular gasoline and diesel cars, a feat most EVs are still struggling to accomplish.

And as for fuel cell phones... hydrogen batteries could provide days, if not weeks, of continuous power on a single refill. For now, it’s just a matter of making the process work efficiently on a small scale and making the fuel easier to get and safer to handle.

Can it be done? Yes.

Will this kill off lithium? If it’s going to happen, it won’t be for a long time yet.

Meanwhile, lithium prices are still inching higher, and as we approach what looks to be a building shortage, investors in the lithium space are set to see a lot more growth before this revolution dies out.