“You're nothing but a fearmonger,” he said.

The semi-anonymous critic on a Facebook message board responded to my recent comment that while nuclear power isn't necessarily unsafe, human error denies nuclear power the safety badge of honor so many want to give it. And I'm right.

Fukushima is a shining example...

Poor logistical planning, lax policies, sub-par safety procedures: All of this stuff led to what has now become the worst nuclear disaster in history. And if that weren't enough, it's humans — not isotopes — that have delayed any success on cleaning up that mess.

For more than two and a half years now, Tokyo Electric Power Company (TEPCO) officials have been ineffective at stabilizing the disintegrating power plant. This is a fact. And primarily due to the Japanese tradition of “saving face,” TEPCO and government officials have been unwilling to be truthful or to request any outside assistance.

As a result, severe radiation risks remain — at least, according to scientists, engineers, and physicists that are not on government, pro-nuclear industry group or TEPCO payrolls.

Of course, I don't want to make this into a long-winded debate. And I fully admit that I'm no expert in nuclear physics. But here's what I do know...

If TEPCO can't get this thing under control, and we find proof of a radiation crisis that cannot be effectively contained, I certainly don't want any exposure to the nuclear space, physically or financially.

Here's where we're at right now...

In an effort to keep the reactors cool, a constant pumping of water is required. This has resulted in an extra 400 tonnes of contaminated water every single day.

Take a look at these satellite images that were recently published by the BBC: 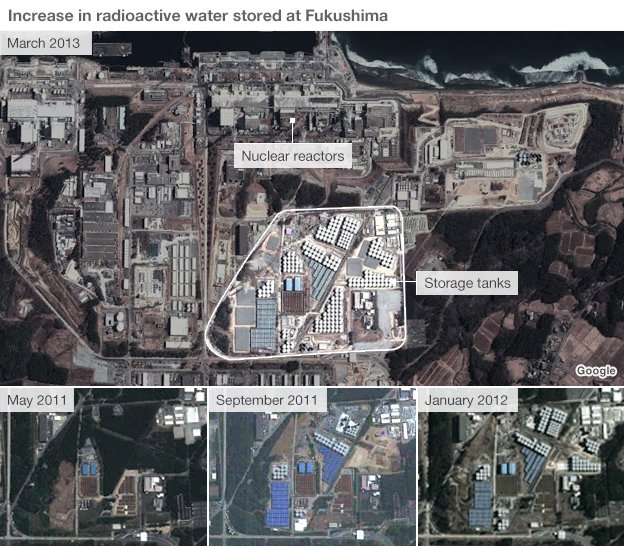 These images show a massive increase in water storage tanks in the area. And unless a permanent solution is discovered soon, it's only going to get worse.

Of course, just days before a decision is due on the 2020 summer Olympics (and Tokyo is a candidate), the Japanese government announced that it will invest nearly a half billion dollars to build a wall of frozen earth around the reactors in an effort to prevent groundwater from coming into contact with contaminated water.

I have no idea whether or not this will work, but if history is any indicator of success rates on nuclear meltdown solutions, I suspect this too will ultimately turn out to be another costly failure.

Meanwhile, we're now hearing that the recent spikes in radiation may actually be the result of radioactive fission occurring outside of the tanks. This is according to chemical physicist and radiation expert Dr. Christopher Busby.

Last week, Busby was interviewed in RT, where he told reporters that a recent sudden increase of 1.8 Sieverts per hour was an enormously large dose that could likely kill someone within two to four hours.

I don't know if Busby's analysis is sound or not. Only a small group of gifted minds can even wrap their heads around this.

Meanwhile, the rest of the world has to hope for the best and, I guess, build massive ice walls...

As with any crisis, there is an opportunity. And in the case of this ice wall, there's one thing that you can count on...

It's going to take a hell of a lot of energy to keep that thing cold. Talk about a sad irony!

So, where will Japan get enough energy to keep this ice wall from turning into a waterfall?

I have two words for you: natural gas.

Folks, this is just one more opportunity for the U.S. to sell some of its massive bounty to an energy-starved nation.

And what an opportunity it is...

In Japan, LNG is running at around $16 per thousand BTUs right now. They're practically begging for cheaper natural gas. In fact, next month, Japan is actually hosting an LNG conference in an effort to push for cheaper pricing.

Meanwhile, we're seeing more and more bullish indicators that new export permits, just like the one that was recently issued in Texas, will be issued for the Cove Point terminal in Maryland and the Cameron terminal in Louisiana.

I'm confident this is going to happen sooner than later, thereby giving us yet another opportunity to get rich off of America's shale revolution.

Although I'm not particularly bullish on nuclear in the United States or Japan (though opportunities still exist in China, Saudi Arabia, and South Korea), I remain convinced that you absolutely must have some exposure to the domestic oil and gas space.