It Was Run by Crooks — Now It's Bigger Than AI

Think of your biggest fear and hold it in your mind for a moment.

(And email me if your greatest fear is in fact wolverines... because I have a lot of questions, beginning with why you are around wolverines in the first place.)

Whatever you're thinking of right now can most likely be boiled down to the fear of one of two things: death or suffering.

What I mean is people generally aren't afraid of snakes as much as they're afraid of the snake bite. The bite does all the damage to cause suffering and, maybe in rare cases, death.

In the same way, people aren't necessarily afraid of public speaking as much as they're afraid of making mistakes when speaking publicly — thus suffering from embarrassment.

Likewise, if I had to guess, an individual wouldn't be as afraid of wolverines as he'd be afraid of what wolverines might (and probably will) do to him — like claw up his leg and bite his neck. That's... quite undesirable.

Rare sighting of a wolverine in Washington state earlier this year 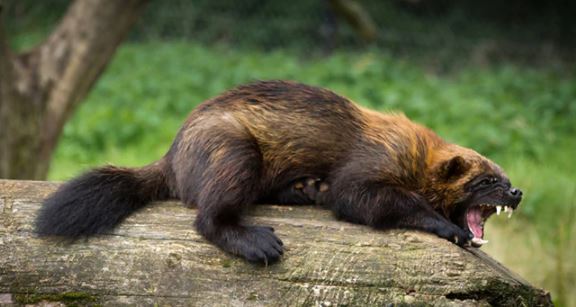 If you asked me my greatest fear, I'd tell you heights. I can't even watch a video of someone standing precariously high without my chest tightening and my palms sweating.

But it's really not the elevation that makes me nervous — it's not even falling off. What's really got me worried is the sudden stop at the bottom. It's not the drop. It's the plop.

All this is to say most (if not all) of our fears generally have layers. And at the core of most of our fears are death and suffering.

And you know where this is going...

Suffering and death are inevitable parts of life. Every human being that has ever walked the Earth has experienced both.

As a result, there is (and always has been) a massive demand for methods to alleviate those fears. From philosophy to pharmaceuticals, humans have spent an unimaginable amount of time and resources softening fears of suffering and death. Let's just consider anti-aging cosmetics for a moment...

You could argue there is some philosophy that doesn't exactly aim to alleviate fears of aging and death. And of course, pharmaceuticals have a wide variety of purposes. But there's no inferring what cosmetic companies are trying to sell consumers with anti-aging products: beauty and youth. It's right in the name "anti-aging."

The desire for beauty and youth is most often pinned on societal pressure. But I'd argue part of that desire is also one of many ways people use to alleviate the fear of death. If you look younger in the mirror and maybe even feel younger as a result, it's easier to convince yourself you're that much further away from death.

The global anti-aging cosmetics market is huge. In 2018 it was estimated to be worth over $50 billion. That's bigger than the AI market today. In fact, that's about the same size as the global solar energy market!

And the anti-aging cosmetics market is only estimated to grow from here. Forecasts estimate the global market will grow by about 5% or 6% CAGR over the next decade. And cosmetics are really just one small part of the growing anti-aging market.

For centuries, anti-aging practices were mostly relegated to the work of charlatans. More recently, the cosmetics industry took over. But new research into genetics and aging have allowed biogerontology (the real study of the biological basis of aging and age-related diseases) to flourish and gain legitimacy.

Anti-aging is becoming less snake oil and more real science. But there's something you should know...

For the past several months, Jeff has been studying the anti-aging market and the real science behind age-extending, groundbreaking biotechnologies. And he's come up with some really unique opportunities and ideas that I don't think most people have really considered. To read more about Jeff's recent research, click here.

Again, we're not talking about immortality. Instead, we're talking about significantly extending the human life span. And the truth is that's been happening over the course of thousands of years. Prior to the 20th century, the average global life expectancy for a human being was under 40 years old. In the past 100 years alone, new developments and better technology have increased life expectancy past 70. That's an 80% increase in about 100 years.

So we're not talking about science fiction here. Biotechnology has greatly extended our lives already. But it's not done. And the next phase of development in the field of biogerontology could be the key to continued life extension.

Check out Jeff's research. It's very easy to be skeptical about anti-aging technology. That's understandable. As I mentioned, for most of human history the market has been controlled by snake oil salesman and cosmetic marketing. But there is some real science behind the biological basis of aging and age-related disease that can be addressed with new research. Take a look at one of Jeff's most recent reports on anti-aging technology here.

I guarantee there are no wolverine attacks involved.