Investing in the Global Push for LNG

Coal is Out, Gas is In

A few weeks ago, I predicted that natural gas would be recovering in 2016.

My reasons were simple: The LNG market is opening up to new players, including the U.S., and we've already seen evidence that a recovery is right around the corner.

Coal is Out, Gas is In

Consol Energy Inc. — one of the biggest coal companies in the world — cut its sales estimates for 2016.

I know that doesn't seem like a massive cut, especially since the upper expectation is still pretty high.

But keep in mind that about 24.1 million tons of that estimate was in pre-sales, already sold and scheduled for delivery before 2015 ended.

That means the company doesn't expect to sell more than a few million tons of coal during 2016.

And what reasons did Consol give for this less-than-confident scale-back?

A warmer winter and the increasing use of natural gas instead of coal for power plants.

This news shouldn't surprise anyone. With the push for lower emissions and cleaner energy, coal has been sliding for some time.

And since the world isn't about to give up fossil fuels overnight, natural gas is the likely candidate to pick up the slack coal leaves behind.

Now, a concern I hear pretty often is that natural gas will go the way of oil: The established major producers will try and starve out U.S. shale producers, and the price will drop dangerously low.

Let's face the facts: The prices are already pretty harsh. But there's one major reason why I think gas will bounce back more easily.

Qatar, thank goodness, isn't Saudi Arabia, and it isn't willing to give up profit for market share.

Take a look at the actual numbers behind Qatar's ranking as top LNG exporter: 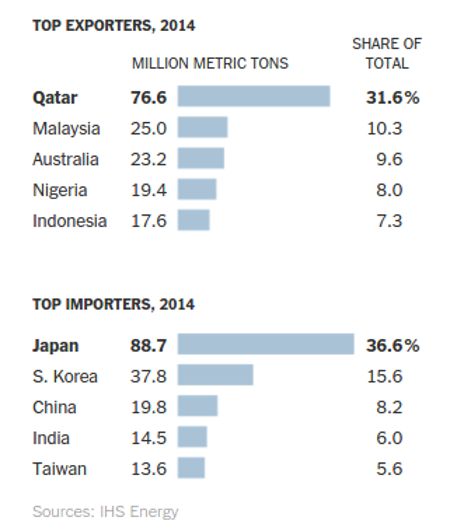 The country accounted for nearly one-third of all LNG exports worldwide in 2014. And that supply, if you hadn't guessed, went largely to Asia.

You see, Qatar already has a foothold in Asia and especially in Japan, where natural gas use went through the roof after the 2011 nuclear shutdown.

Qatar also controls many of the LNG trade routes, so much so that it can even reroute supplies to take advantage of new sales opportunities.

Is Qatar worried about new suppliers entering the market? Not by a long shot. It's got its money coming in, and it isn't going to try and depress prices to keep new players out of the game.

Ibrahim Ibrahim of the country's RasGas LNG company seems comfortable with the situation: “A lot of people have gas, but we have an integrated project. We are not trying to maintain a leadership role.”

Since December, natural gas prices have been slowly inching back up, and they look good to keep going.

In the meantime, the U.S. is preparing to send its first shipment of LNG out of Corpus Christi, Texas to France under contract with Engie SA.

And if you're interested in hopping on board this trend while it's low and riding straight to the top, I've got just the play for you.

Right now, I'm putting the finishing touches on a new report that is capitalizing on the early stages of this global LNG push, and as a subscriber of Energy and Capital, you'll have full access to it — at absolutely no cost to you.