It must suck to be Elon Musk.

Sure, he’s one of the wealthiest people in the world, but that guy can’t win.

He builds an electric car company that completely disrupts the antiquated transportation economy, and internal combustion zealots criticize the vehicles for not being able to travel long distances.

Never mind the fact that more than 70% of the commuting population in the U.S. travels no more than 50 miles per day, while every Tesla delivers an all-electric range of no less than 200 miles.

He builds a reusable rocket company, but during the testing phase he gets ridiculed by media knuckle-draggers who have never done anything of value in their lives because the first test models failed.

Can you imagine if we just shit-canned every big idea because it didn’t work the first time?

There would be no cars, planes, trains, or rockets.

There would be no cellphones, flat-screen televisions, or movie streaming services.

While people love to hate Elon Musk, I’m grateful for folks like him.

People who, despite the odds, work hard to deliver products and services that most people couldn't even conjure up in their wildest dreams.

People who, despite every roadblock put up against them, realize their goals and become insanely successful.

Why would we criticize that?

It just makes no sense.

We see this with autonomous vehicle technology today too.

It’s interesting, but earlier this week, Musk commented on the "business of risk" in Tesla's autopilot technology, saying:

Although we’re still at the beginning of this autonomous driving revolution, the Department of Transportation fully admits that autonomous vehicle technology will save lives:

The safety benefits of automated vehicles are paramount. Automated vehicles’ potential to save lives and reduce injuries is rooted in one critical and tragic fact: 94% of serious crashes are due to human error. Automated vehicles have the potential to remove human error from the crash equation, which will help protect drivers and passengers, as well as bicyclists and pedestrians. When you consider more than 35,000 people die in motor vehicle-related crashes in the United States each year, you begin to grasp the lifesaving benefits of driver assistance technologies.

There are also the economic benefits that most in the media never discuss.

According to a National Highway Traffic Safety Administration study, "Motor vehicle crashes in 2010 cost $242 billion in economic activity, including $57.6 billion in lost workplace productivity, and $594 billion due to loss of life and decreased quality of life due to injuries."

Given that 94% of those crashes were the result of human error, the integration of autonomous vehicles could eliminate the vast majority of those losses in economic activity.

Yet folks still want to criticize those who are doing the heavy lifting to solve these types of problems because the solutions aren’t instant. And honestly, I think some people would just rather celebrate failure than success.

The media eat this up too.

Here’s a perfect example of what I’m talking about...

Check out this article from the Daily Mail — 21 years ago... 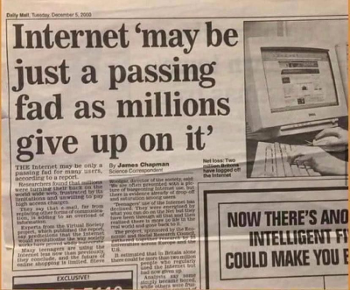 I have no doubt that 20 years from now, we’ll look back at how the world treated Elon Musk and his quest to perfect autonomous driving and shake our heads, mocking those who mocked him in 2021.

Love him or hate him, Elon Musk’s visions have changed the world.

Twenty years from now, not only will autonomous driving be a standard option for most new cars, but most of those cars will be electric too.

Twenty years from now, reusable rockets will be sent into space, where Musk’s low Earth orbit satellites will be providing internet access to folks all over the world, regardless of where they live and how remote from civilization they may be.

Twenty years from now, Musk-inspired tunnels will connect cities and allow commuters to safely travel at a high speeds without the hassle of traffic congestion.

And Musk isn’t the only entrepreneur worthy of our praise and thanks either.

There are dozens of groundbreaking technologies that will gain significant traction in 2022 thanks to the entrepreneurs who have the stones to create this stuff despite any and all obstacles.

And, of course, not only are these exciting developments, but they’re insanely profitable too. Like this new chip technology, for instance, that will soon be attached to smartwatch sensors that allow your doctor to track and monitor your health metrics from anywhere in the world.

These sensors could literally alert your doctor to a heart attack that hasn’t even happened yet.

Professional athletes use these sensors to monitor oxygen levels and hydration.

Millions of people suffering from diabetes can have their glucose levels monitored, tracked, and sent back to their doctors, allowing for a seamless connection to healthcare providers.

This technology has actually been in stealth mode for a long time and was known as Operation Red Light. But it’s not in stealth mode anymore, and some of the world’s most successful investors are loading up.

I’d encourage you to learn more about Operation Red Light too as this could be one of the biggest technology plays in 2022.