How the Dirty U.S. Power Grid Will Make You Filthy Rich

It was a giant red flag wildly waving back and forth, warning us all of the state of the U.S. power grid.

I’m not suggesting that power plants across the country will suddenly freeze and cause national blackouts. As I mentioned last week, Texas failed to winterize its power plants back in 2011 and way back in 1989 when similar deep freezes occurred.

No, the Texas grid crisis was a shining beacon of light illuminating exactly how fragile our country’s most vital infrastructure can be.

To put it bluntly, America is in desperate need of an upgrade.

Yet the power that goes online in the future won’t be the same as what we are used to.

At least, it can’t if the U.S. has any real ambition to push for clean energy.

And therein lies our opportunity...

The Fragile State of the U.S. Power Grid

I’ll confess that in my usual rants on how poor U.S. infrastructure is, we’re usually talking about the precarious state of our pipelines.

Today, however, we’re digging into a part of our infrastructure that is arguably more important than the millions of miles of oil and natural gas pipelines that crisscross the United States.

I’m referring to our electrical generation.

And much like the rest of our infrastructure, delivering electric power to people involves an aging and complex network of outdated facilities, more than 600,000 miles of transmission lines, and roughly 5.5 million miles of local distribution lines.

Just how old are we talking?

Put it this way: Most of our national grid is far older than its 50-year life expectancy, including nearly three-quarters of the transmission and distribution lines we’ve built.

In fact, these distribution lines account for 92% of all electrical service interruptions. Although there are a number of things that can go wrong and cause a blackout, such as severe weather events and vandalism, perhaps the one we can directly control the most is the aging infrastructure.

Unfortunately, that’s one critical bit of spending Washington simply hasn’t been interested in over the years.

Consider our lack of infrastructure as the biggest overdue bill that will come back to haunt every single one of us.

In fact, I’ll show you how big that investment gap is right now. According to the American Society of Civil Engineers (ASCE), there will be a funding gap of nearly $200 billion in our power grid by 2029.

Remember, this is only part of the massive investments that are needed across our entire infrastructure.

In total, the ASCE estimates that our infrastructure investment gap will be a jaw-dropping $2.5 trillion by 2029: 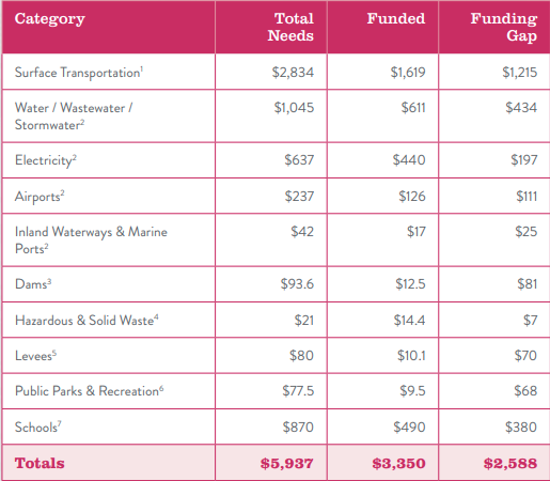 But there’s another reason our power sector is about to get an enormous upgrade, and our dirty power grid is going to make individual investors like us filthy rich.

Call it a perfect investment storm if you want.

Within mere hours of stepping inside the Oval Office, President Biden quickly moved to undo several of his predecessor's actions.

One of the biggest actions he immediately took was to reenter the U.S. into the Paris Agreement. As you know, this 2015 agreement by 196 countries was a pledge to reduce their greenhouse gas emissions.

Now, this isn’t necessarily a shocking decision to anyone. The moment President Biden won in November, it was simply a matter of time before we jumped back into the agreement.

What you really need to ask yourself is: What’s next?

Perhaps the largest change will be weaning the U.S. off of fossil fuels, which is something that is far easier said than done. And no matter which side of the aisle you're on, you should know that this won’t happen overnight.

But I’m talking about more than an all-out transition to electric vehicles.

Our future power generation is going to be much, much cleaner.

The truth is it has to be.

Right now, over 60% of our electricity mix is generated by either coal or natural gas.

Approximately 74% of coal-fired power plants are over 35 years old.

The nightmarish thought here is that the average life of these plants is only around 40 years old, so most of our coal power plants are either at or near retirement age.

Like I said, tomorrow’s electricity will have to be cleaner.

The EIA projects that renewable energy — which accounted for roughly 21% of our power generation in 2020 — will more than double by 2050.

To be fair, wind and solar plants have their own hurdles to overcome if that goal is to be achieved.

However, last week I hinted at a new technology being developed that offers us another clean option, one that is far more reliable than both fossil fuels and renewable energy.

It’s happening in a sector of our energy complex that you’d least expect: nuclear.

One company has already proven that nuclear is a viable option to help prevent a future crisis in our sorely outdated power grid — but it’s not the kind of nuclear power you have in mind.