Gold is Boring. But Boring is Good.

The worst possible thing that can happen to gold has happened...

Very few investors are excited about the yellow metal right now — and even fewer are buying.

What has happened to sales? Why has gold become boring?

But the truth is price volatility is really a symptom of low interest, rather than an explanation for it. Supply and demand ultimately moves prices.

So what's really making gold boring? Why is there such low interest in gold?

Well, it's nearly impossible to say for sure. But I think two things are playing a major role:

Let's face it: Most investors aren't looking to invest. They're looking for a winning lottery ticket, trying to “get rich quick.”

Ten years ago, in gold's heyday, there was a palpable perception that investing in gold could make you rich. It could... and still can. But that “get rich quick” perception has faded. And investors have shifted their focus to other “get rich quick” stories like Bitcoin.

It's also noteworthy to mention that 10 years ago, during the financial crisis, there was far-reaching perception of a near-term systemic global economic failure, which added to gold's appeal. Today, equity markets are still rallying. And the perception that investors need to own gold as a hedge against global economic collapse has faded.

Meanwhile, the U.S. dollar has experienced a bit of a rally over the past several weeks, which has weakened gold prices and further softened interest.

As measured by the USD Index, the dollar has gained over 4% since mid-April. But this rally in the dollar is undeserving.

The recent rally in the dollar began as fears of a trade war between the U.S. and China cooled off back in April. And that's something we could have expected. But here's the thing: The value of the greenback wasn't significantly negatively affected when the trade war fears were heating up.

Take a look at exactly how the dollar reacted throughout this whole affair: 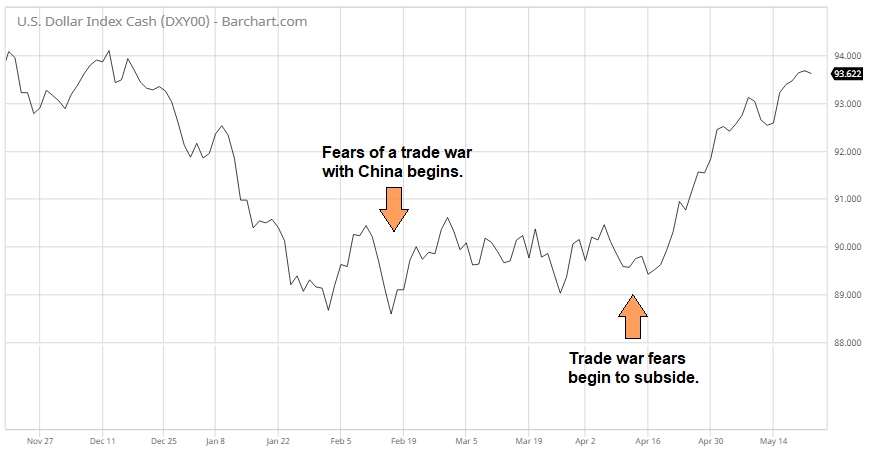 We can see that the value of the dollar was essentially flat throughout the recent big trade war scare. But when tensions over the trade war began to ease, the market turned positive for the greenback.

The market loves when America wins. And even though escalating fears didn't depress values back when everyone was afraid of a trade war, easing tensions gave the market a reason to buy the greenback.

But this undeserved rally won't last. Soon, the market that bought the USD on the easing trade war hype will forget why it bought the dollar and sell off.

With all this in mind, it's probably a great time to buy gold.

The truth is, gold should be a bit boring. One of the key characteristics of good money is stability. You don't want wild swings in the value of your money. Stability in gold is really a good thing and should be considered a reason to own it.

Yes, we invest in the gold market to make money. But we also want to own gold for wealth preservation. It's a safety net for your money.

So even though the hype train has come to a seeming halt and price volatility is low, there's probably never been a better time to buy gold.