The Death Kiss for American Coal

He's not as renowned as famous oilmen like Colonel Drake or John Rockefeller, nor will you see children today learning about Hart's legacy. I would actually be surprised to find anyone outside of Fredonia, New York who recognizes the name.

But I guarantee you that's going to change.

William Hart is the “the father of natural gas” in the United States. He was the one who made the first commercial gas discovery outside of Fredonia — nearly two hundred years ago!

Compared to today's wells, we can hardly consider it huge. Hart's 27-foot well is a far cry from today's standard depth, which now extends several thousands of feet underground.

Unfortunately, the U.S. natural gas industry was soon overshadowed by the prospect of another cheap energy source: petroleum.

But if there's one drum I've been beating for the last few years, it's that the U.S. is in the midst of an energy revolution. It all revolves around the government's all-of-the-above strategy to develop our energy resources.

It turns out the President is dropping a c-word from our energy vocabulary: coal.

A few days ago, I mentioned that President Obama was on the verge of making the coal industry anathema to our energy sector.

Now we know this for a fact.

The government report, aptly titled, “An All-of-the-Above Energy Strategy as a Path to Sustainable Economic Growth,” was released on Monday. Essentially, the report outlined the government's plan to enhance our energy security. What it also does, however, is give us a blueprint for the future.

Yesterday, the EPA proposed its guidelines for states regarding greenhouse gas emissions from fossil fuel-fired power plants. Despite the fact that coal currently accounts for more than one-third of our electric power generation, these plants will be forced to cut carbon emissions by 30% by 2030.

Call it the death kiss for American coal.

Then again, you can also think of this moment as the beginning of a natural gas era.

Forget the controversy surrounding this legislation. You and I both know it will be hailed by environmentalists and excoriated by anyone with a dime in the coal industry.

In fact, we can dismiss all of the rhetoric surrounding coal that is being thrown around in the media right now.

Believe me, this is going to be a nasty fight for both sides... and the real casualties in this energy war are investors.

How many times in the last five years have we heard someone calling a new bottom for coal stocks? Tell that to shareholders of Arch Coal, who have been waiting since 2011. 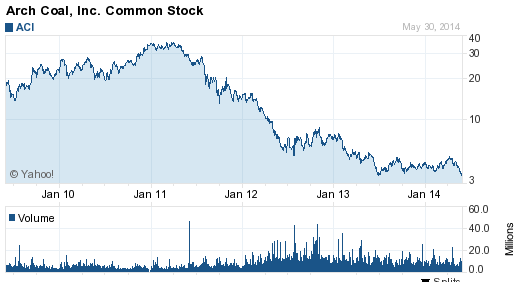 There should be absolutely no doubts that we're barreling headfirst toward a natural gas-fueled future. Since we started developing our tight gas resources, the United States overtook Russia to become the world's largest natural gas producer.

So where's the rub? Actually, there's one sobering part in this energy boom, which you can see in the chart below... 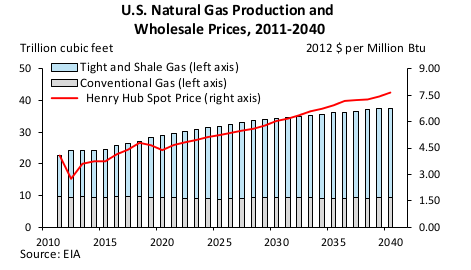 Notice that our conventional natural gas production is expected to be stagnant around 10 trillion cubic feet per year from here on out.

This future unconventional gas supply won't come cheap, you can count on that. Yet despite the heavy reliance on tight and shale gas, the Energy Information Administration isn't expecting sudden price spikes, either, but rather a slow and steady increase over the next two decades.

To give you a little more perspective into this, consider the fact that there are over 200 rigs drilling into the Eagle Ford Shale in South Texas right now compared to a total of 325 natural gas rigs (in 2011, there were nearly 1,000 natural gas rigs in the United States).

It is, however, shaping up to be a huge payday for some natural gas investors.