In the Inner Harbor of Baltimore stands a huge building, its roof lined with four tall, black smokestacks.

They’re covered over now. The walls of the boilers run through a Barnes and Noble, and you can wander through the hollowed-out shells of what was once the basis of industry.

The front of the building proudly displays the title it once had: Power Plant.

It was built in 1900 and was known alternately as the Pratt Street Power Plant and the Pier Four Power Plant until it was retired in 1973.

Here’s what it looked like chugging away in the heart of the harbor: 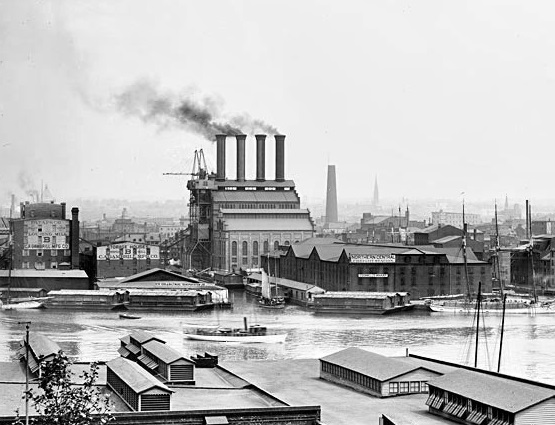 Sometimes on my way through the city, I’ll look up at it and try to imagine it as it was back then: bricks dark and sooty, smoke spewing from the top and into the morning air...

And then I come back to the present, glad to be breathing only modern levels of pollution.

See, the Power Plant used to be a coal-fired plant, one of the biggest in the city.

Originally, it provided power to the United Railways and Electric Company, then later to the Consolidated Gas, Electric Light and Power Company, which eventually became Baltimore Gas and Electric.

Of course, it was way outdated even before then. By the time it was retired, few were sorry to see it go.

It stands as a stark reminder of probably the truest thing in this world: nothing lasts forever.

And coal least of all.

It’s ironic, given that the fuel takes around 300 million years to form naturally. Coal’s got the longest lifetime of any fuel, but it’s going to be the first to go.

Because much like the electricity provided by the Power Plant back in its day, coal is being replaced.

All over the world, aging plants are meeting the same sad fate as the one on Pratt Street.

They’re being replaced with natural gas, nuclear, solar, wind... basically anything is better than coal nowadays.

It doesn’t even have the protection of a low price anymore.

While coal power is still among the cheapest energy we have, the sudden boom in supply of natural gas has made it more than competitive with the dirtier fossil fuel.

In its latest Annual Energy Outlook report, the Energy Information Administration estimates that U.S. coal consumption will continue dropping in every case — that is, whether or not the country takes steps specifically to increase clean energy generation.

Globally, coal consumption is expected to rise about 0.6% per year through 2040, but its share of the world’s energy portfolio will decrease as more capacity from everything else takes off.

We could feel nostalgic for the past if we wanted...

But what’s the point when there are much better things coming our way in the future?

Late last year, I conceded that coal may yet have one last day in the sun.

President Trump’s insistence that he’ll see the coal industry repaired and dominant again is foolhardy, but stocks have rallied at less logical things.

And yet U.S. coal prices have risen since last October, almost back up to 2015 levels:

How long this lasts and how high coal will move, however, still remains to be seen.