Faraday Plans to be Faster than Tesla (NASDAQ: TSLA)

In this race, how fast the car is made may be the deciding factor...

There are a lot of parallels to be drawn between electric vehicle front-runner Tesla Motors and its latest direct competitor Faraday Future.

For one, both are working on similar products: electric vehicles with autonomous (or driverless) capabilities that can be connected via the Internet of Things.

For another, they're both working on huge factories for these things. Tesla's $5 billion Gigafactory is already beginning its first stages of production, and Faraday is planning its own $1 billion factory right next door, which will break ground this year.

Then there's the fact that both factories are being funded by Asian supporters.

Tesla has been partnered with Japanese Panasonic for years, using the battery company's designs in both its cars and home battery systems.

Faraday is being backed by Chinese billionaire and founder of LeTV Jia Yueting, whose money will help bring the factory online and whose access to technology will be seen in some aspects of the cars.

One major difference between these two auto-tech companies is, obviously, the cars themselves. Similar in function though they may be, the make-up of the vehicles will be different. 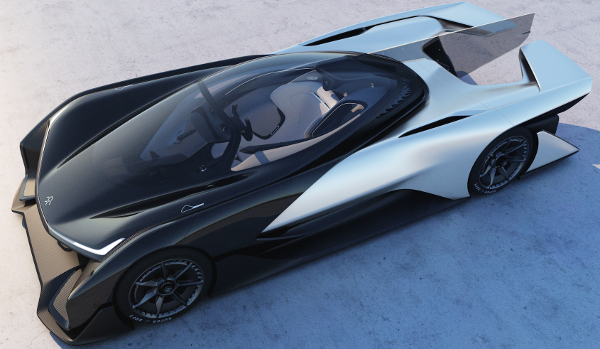 And according to Faraday Future, that difference will put it way ahead of even Tesla's impressive development speed.

Faraday's cars are being assembled through a system it calls “Variable Platform Architecture.” VPA is set up so that the car is powered by long strings of lithium batteries, rather than by one giant lithium battery such as Tesla has.

This will help not only in assembly of the car, but in maintenance, since individual sections of the battery string can be replaced when they start to deteriorate.

“With VPA, we can dramatically compress out time to market and reduce our costs,” claims Faraday Future senior Vice President Nick Sampson.

Tesla's time to market, for all of its delays in recent years, has been admirably fast. The company is only 13 years old and has done quite a lot in that time.

As it stands now, 18-month old Faraday Future is on its way to building its first factory, with more employees globally than Tesla had at this stage — 750 to seven-year-old Tesla's 600.

What's more, Sampson claims the company will have its first mass market car ready for delivery in “only a couple years time.”

We talk a lot about Tesla's competitors, as it seems everyone wants a piece of the market Tesla Motors dove into, but if anyone is going to steal the top autonomous-EV spot, this one seems to be the most likely winner.