Is it Time to Invest in Copper?

Gold and silver get all the glory.

Meanwhile, copper is the redheaded stepchild of the metals family — often overlooked and generally disregarded.

It seems that the price of copper can't go much lower from here.

Copper is Simply Too Important to Fail

One of the most useful metals on Earth, copper is used in nearly every major industry of the world: transportation, engineering, machinery, equipment, electrical, building, automotive, computer, etc.

And it's exactly because of copper’s commercial importance that the metal's price is never going to fall to zero.

However, a five-year slide in copper prices has severely hurt the industry, leaving some companies tens of billions of dollars in debt. 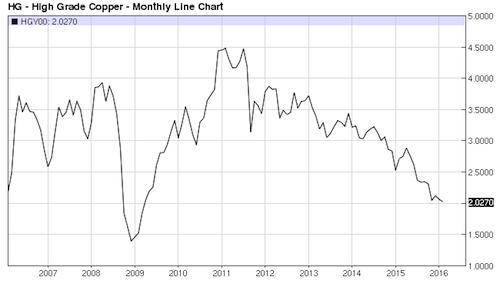 Recently dipping below the $2.00 per pound level, however, the gap between copper prices and production costs is shrinking for mining firms worldwide.

There are various estimates of the average price of copper production. But for a good estimate, we can look to the official reports of Chile, the world’s top copper-producing country, accounting for about 35% of total global copper production.

According to the most recent data, released in December, the average cash cost per pound of copper produced in Chile during 2Q2015 was $1.625 per pound. (According to the mining minister of Chile, this data accounts for 91% of Chile's total copper output.)

Let's take a look at production costs for some of the world's largest copper miners...

With a planned 11% cut in overall costs, Pizarro said the company hopes to lower copper production costs to $1.255 per pound in 2016.

Of particular note concerning the company's copper business, Freeport expects its consolidated copper sales to increase some 340% to 5.1 billion pounds in 2016.

Investors should note, however, that the copper is only one part of Freeport-McMoRan's business portfolio. The company is also heavily involved in gold and molybdenum mining, as well as oil and gas production, which has actually put the company $19 billion in debt.

The Anglo–Swiss commodity trading and mining company produced over 3.3 billion pounds of copper in 2015. According to Glencore's most recent investor update, the company's net unit cash costs were approximately $1.42 per pound in 2015. The company expects to be able to lower its net unit costs to $1.10 per copper pound this year.

BHP is, of course, another massive mining conglomerate that produces a number of metals and petroleum products, including copper. But in 2015, BHP produced nearly 3.8 billion pounds of the red metal. The company reported that unit cash costs declined by 14% last year, including BHP's main copper asset, the Escondida Mine, where unit cash costs were $1.07 per pound.

Investors interested in BHP's copper assets should note, however, that the company forecast a 12% decrease in copper production this year.

You'll notice that there is a fairly significant spread in average copper production costs. But current production costs seem to generally range from about $1.00 to $1.75 per pound among the world's largest producers.

That's below copper's current spot price of $2.05 per pound — but not by much.

There are many factors to an individual company's total copper production costs. But among the most important is the grade of the ore, which is essentially the amount of copper in rock.

The average grade of copper ores has been falling steadily over the past several years. In 2013, SNL Metals Economics Group, a major provider of global mining industry information and analysis, completed a study from 47 producing copper mines that showed weighted-average head grades falling 30% between 2001 through 2012.

Not only are head and reserve grades declining at existing mines, the average ore grades of copper in new discoveries and developing projects also declined over the period.

The average grade of copper ores is now below 0.7% copper. And geologists expect future declines in global copper ore grades at least through the next decade. 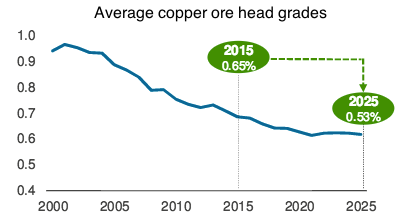 Declining ore grades mean miners will have to mine more material at higher costs to recover the same amount of material. It also means there will be a need for new economically feasible deposits ready to be mined going forward.

And that could be a problem... one that I've talked about before.

Due to sharp declines in commodity prices, no one has been putting money into developing new mineral deposits to be mined in the past four years. Global mineral exploration budgets for new mines have literally been cut in half since 2012.

And, of course, copper mines don't last forever. The resource contained in each deposit is certainly finite. So there needs to be a continuous supply of new economically feasible deposits available to keep up with old depleting mines. The glut in exploratory activities over the past four years could result in a shortage of mine-ready projects in the future — leading to a shortage in copper supplies.

And that's not what copper bears want to hear, especially since copper warehouse supplies held by the London Metal Exchange have been falling for the past several months. 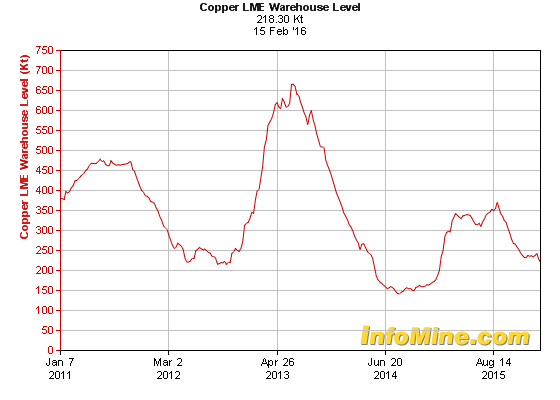 Add to all this rapid demand growth in China (which now accounts for 45% of the world’s copper demand) and the rest of the world, and the long-term investment outlook for copper looks incredible. 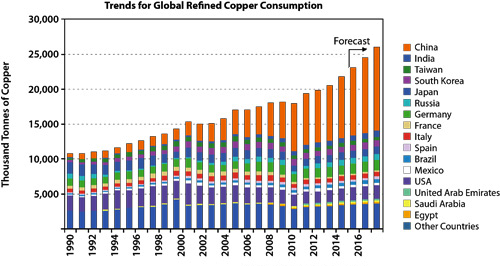 Is it Time to Invest in Copper?

Although I think copper prices can still come down a little bit, I don't see them slipping much further over the short- to midterm. So I believe the downside risk is limited.

Last week, COMEX copper short positions fell to their lowest levels since November. This could be an indicator of a turnaround in copper prices. I have personal investments in a few small-cap copper miners with low production costs, and I think you should, too.

There is no doubt risk in the copper market right now. But I believe the rewards will be worth the investment.