“I like coal. I'm going to make sure we continue to burn clean coal.”

When I heard Romney make that pitch a few weeks ago, a small pit began to grow in my stomach... a time bomb ticking away, set to go off on November 7.

Granted, I expected our candidates to pander to the coal industry while on the campaign trail no more or less than I'd expect them to indulge the corn farmers on their way through Kansas, Nebraska, and Iowa.

That's just the way the game is played.

Hopefully, the eight electoral votes between Wyoming and West Virginia — where more than half of U.S. coal production takes place — was worth it.

It certainly wasn't for coal investors...

Recipe for a Massive Sell-Off

Coal may have stood with Romney, but it fell with Obama's reelection — and perhaps a little too hard. With a slew of potential regulations on the way, the market punished coal stocks across the board.

It was much worse than a general decline, with most of the major coal stocks taking double-digit losses.

While I don't harbor some secret biased against the coal industry, it's difficult for me to be as enthusiastic about coal as Romney.

Because this much is certain: We are slowly phasing coal out of our energy picture.

Now, let me be absolutely clear that this won't take place overnight... but it is happening.

Three weeks ago, I mentioned an overwhelming amount of our coal consumption is used to produce electricity. Unfortunately, coal's share of our total electrical generation dropped by more than 10% in only the last four years.

Here you can see how bad 2012 truly was for coal demand: 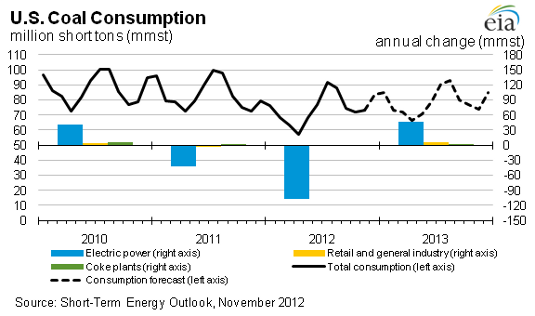 That isn't some doomsday scenario or statistical manipulation; it's what happened, plain and simple.

And not only are we using less of it, but coal production this year is expected to drop by 7%.

Now, our long-term bearish outlook doesn't necessarily mean all is lost. In fact, the post-election sell-off may turn out to be an opportunity in disguise.

Bucking the recent trend, coal may have a better year in 2013.

For starters, we're going to see a comeback for natural gas take place over the next few years.

Dirt-cheap prices have caused a major slowdown in drilling activity, which will help ease the supply glut that has plagued gas producers during the past several years.

In the Energy Information Administration's (EIA) latest Short-Term Energy Outlook, coal demand will finally get the boost it desperately needs: 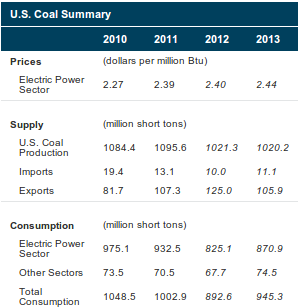 Though the forecast may be grim beyond 2013, there's a second way to play coal — and this one has absolutely nothing to do with empty campaign promises...

Buy or Sell: Your Best Play On Coal

Holding onto coal stocks during 2012 was anything but easy.

Those of you with skin in the game know exactly what I mean. This is about as rough as it gets: 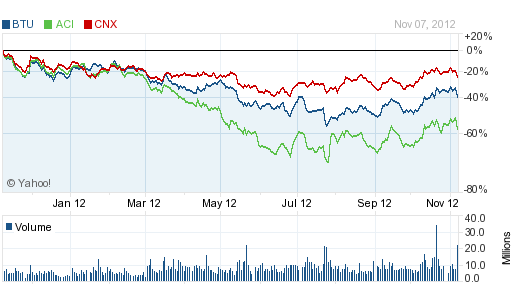 Of course, Tuesday's sell-off was painful in and of itself, and the ongoing war against "dirty coal" certainly hasn't helped.

So the question for those of you determined to turn a profit on coal isn't what Obama is going to do — nor will it matter how our domestic natural gas boom plays out (at least, it won't if you're able to limit your risk).

Take another look at what I told you weeks ago concerning international coal markets. If you're long on coal, keep your focus on the Far East.

Teck Resources is a good place to start. Last year, about three-quarters of the company's revenues came from overseas. Nearly half was generated in Asia.

Right now, the odds are stacked against coal here in the United States; the push for cleaner energy has never been stronger.

The president has proven beyond all doubt that he's willing to bet the farm on green energy projects, no matter the cost. That could mean billions of dollars lost to failed projects.

Is that a bet you're willing to take?

P.S. Too many investors think it's impossible to make serious money outside of the stock market... but that couldn't be further from the truth. My colleague Nick Hodge has found a government “loophole” that's making his readers a small fortune — without ever buying a single share stock. Learn more about this little-known government dictum and the full details on this investment strategy here.