“You have to check out Ben Franklin… How does Wall Street NOT see it coming?”

When my colleague Alex Koyfman floated this odd question my way in the predawn hours this morning, I’ll admit I was a bit confused at first.

But if there’s one thing I’ve learned over the past decade, it’s to pay close attention to Alex whenever his excitement reaches a pitch like this.

When Alex gets this excited, people make a lot of money.

After all, this is the guy who scored a 146% gain for his readers in just four months recently. While most of the investment herd was panic selling during the pandemic, Alex and his readers have doubled their money three times since last March.

When I asked for him to elaborate further, he looked up at me, blinked rapidly as if coming out of a trance, and doubled down on his remark.

“It all comes down to the Ben Franklin… and nobody sees it yet,” he said.

At this point, he could hardly hide his exhilaration.

It didn’t take long for me to realize he was referring to one of the largest container ships on the planet.

And yet the CMA CGM Benjamin Franklin is the reason why Alex’s readers are grinning ear to ear right now.

4.5 Million Reasons Why Investors Are Making a Killing From This Green Fuel

With a gross tonnage of 179,922, the Benjamin Franklin is part of a fleet of ships that have become a critical component in global trade.

Here’s a look at this behemoth in port: 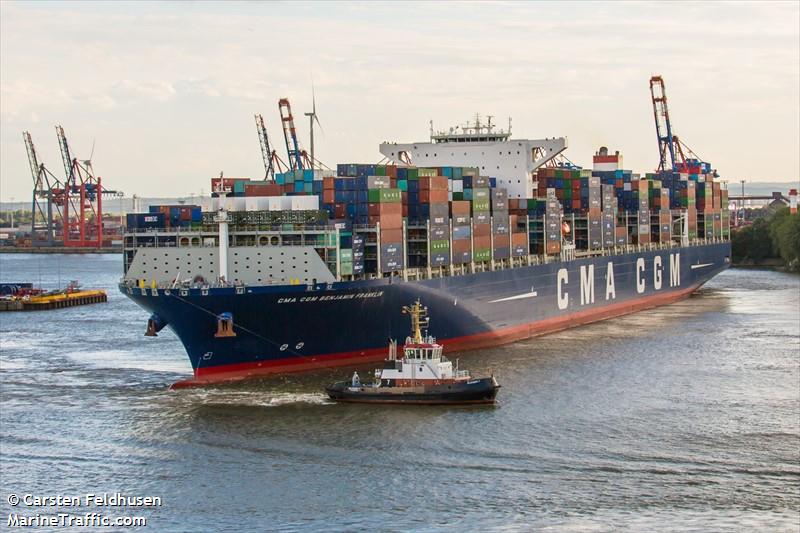 Just how important are we talking?

Well, consider that the international shipping industry is responsible for approximately 90% of world trade.

As some people put it, the shipping industry is the lifeblood of the global economy.

As you can see for yourself below, there's been some incredible growth in seaborne trade over the last 30 years: 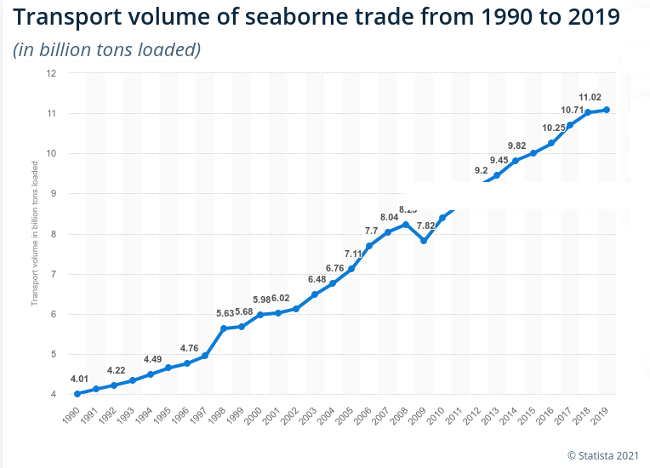 And an undeniable fact right now is that those ships are dirty as hell.

With a ship like that, you can bet it’s carrying over 4.5 million gallons of fuel oil for the journey, and a single vessel can produce as much sulfur as 50 million cars throughout the year.

These things are absolutely massive, with this ship in particular able to carry close to 18,000 containers.

In order to power these metal beasts, the engines of these large container ships can weight upward of 2,300 tons — boasting more than 1,000 times the power of your car.

Like I said, the maritime shipping industry is a dirty business.

Even though the shipping industry is dirty right now, it won’t be for long.

You’ve probably never heard of the Getting to Zero Coalition.

Truth is, not many investors have at this point. This coalition consists of over 80 stakeholders, including industry partners, energy companies, port cities, and various government organizations.

It was set up with one goal in mind — bring carbon dioxide emissions from seaborne trade to net-zero.

The United Nations has already set emission goals for the industry.

Having a target in mind is good, but getting there won’t be easy. The coalition has said if the shipping industry has any shot of achieving this goal, the first net-zero ships must be in service by 2030.

And that, dear reader, is why Alex was so excited earlier.

You see, there aren’t many options available to fuel massive container ships like the Benjamin Franklin.

Truth is, there weren’t any… until now.

However, all I can do is open the door. The next step is up to you.

I strongly recommend you take a few minutes out of your day and let Alex show you the technology he’s uncovered and the tiny, off-the-radar stock that’s behind it all.

You can learn all the details for yourself here.