The one that comes to mind begins with a cheery voice-over, "I believe in the future," followed by the image of someone plugging a power cord into a piece of coal.

By the end of the 30-second commercial, the audience is supposed to feel more upbeat about the possibility of clean coal.

But hey, if you tossed me $35 million bucks and a camera, I'll find a way to make anything look good.

Whatever your feelings toward coal, however, there is one sobering point the commercial gets right. Coal generates about half of our electricity. Unfortunately, there's no side-stepping that fact.

So what is the $35 million dollar advertising campaign trying to accomplish?

Clearly, their goal is to convince you that there is a future in developing clean coal.

I can only hope my readers aren't swayed just because a commercial says so. Even if you did take their overly optimistic outlook on coal, there's a good chance you're staying away from coal investments. In fact, coal investors are still feeling the sting from last year's price collapse.

As you can see, things haven't been so pretty for coal: 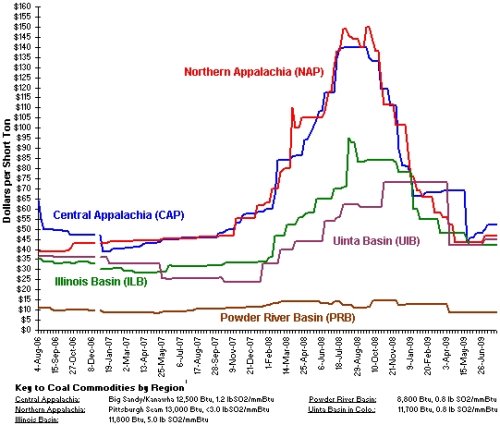 If dirty cheap coal hasn't been able to recover, what chances should we give a more expensive clean coal?

Of course, there's one problem with clean coal — it's still dirty.

How dirty are we talking?

For starters, approximately 60% of the United States is surface mined. Sometimes entire mountain tops are stripped to reach the coal underneath.

I've personally seen the effects that surface mining can have on the surrounding area. One pass over the Alberta oil sands in a helicopter will show you just how massive these projects are. Fortunately, unlike coal, the future of oil sands production will be much cleaner. . . but I'll save that debate for another day.

Then we have the underground mines, which can reach a depth of 1,000 feet. I'm pretty sure I don't have to run through all the dangers associated with coal mines.

Believe me, the sight itself might make you rethink the term clean coal.

Clean coal technology doesn't solve the cost issue associated with mining and transporting the coal to the plants.

After the coal is mined, it must be transported. Almost 70% of U.S.-mined coal is shipped via railway, which can be just as expensive as the entire mining process itself. A single coal plant needs about 40 freight cars to supply the 1.4 million tons of coal it requires per year. If you're counting, that's just shy of 15,000 freight cars necessary, which only adds to pollution.

If the United States is the undisputed king of oil addiction, China takes the crown for the world's largest CO2 polluter. China uses roughly three billion tons of coal every year.

At first thought, you'd think the Chinese would welcome clean coal technology to the hundreds of coal plants billowing out greenhouse gases.

I wouldn't hold your breath on that one.

The reason? You guessed it — cost.

China has already shown her disdain for hiking the cost of coal that comes with using clean coal technology. Instead, the Chinese believe they can get larger emission cuts by making the buildings and vehicles that use the coal more efficient.

Still, I can't blame some companies for at least trying to make that push for China. . .

Don't Throw in the Towel Just Yet

Duke Energy (NYSE: DUK), for example, just signed a Memorandum of Understanding (MoU) with one of China's biggest electric utilities, China Huaneng Group (which produces about 10% of the electricity consumed in China). According to the MoU, execs from both companies will get together to explore the possibilities of reducing coal plant emissions, as well as developing other renewable sources.

These two companies are no strangers to clean technology.

Duke is currently building one of the largest coal gasification power plants in the world. Their new 630-megawatt plant in Edwardsport, Indiana, isn't expected to go online for another two or three years. China Huaneng Group recently built China's first CO2-capturing demonstration facility in their Cogeneration Power Plant. A similar building under construction in one of their coal-fired plants, located in Shanghai, is expected to begin operation by the end of this year.

Editor's Note: While there's money to be made producing clean energy, the fastest way to energy security is through demand reduction. And a handful of companies are making a killing doing just that. My colleague, Nick Hodge, has targeted three Smart Grid Stocks that stand to make his readers a fortune. Click here to learn more.