Canada is the last place you'd expect to see a natural gas crisis.

But unfortunately for our neighbors to the north, one has been silently developing for years.

As you know, more than 95% of Canada's oil and natural gas production originates from just one place, the Western Canadian Sedimentary Basin. The WCSB is responsible for making Canada one of the largest producers in the world — but it's been going downhill since production peaked in 2001...

To say the natural gas industry is critical to Canada's future is a gross understatement. Demand is expected to double between now and 2035 and generate almost a trillion dollars over the next two decades, as well as support nearly 300,000 jobs.

There's a reason this crisis hasn't made front-page news yet: It turns out Canadian natural gas production stabilized during 2011, something that was unexpected considering the decrease in gas drilling.

Even though conventional production was still declining, the much-needed boost came from the country's shale plays.

Now, you might notice a striking similarity between Canada's situation and the United States' own shale success — with one small difference. The flood of unconventional gas in the U.S. is causing a major shift in our electric power generation, something that has been evident for the past decade.

We can clearly see this transition away from coal-fired powered plants from the EIA (click image to enlarge):

This shift was inevitable, given the cheap price environment throughout North America.

The U.S. and Canadian shale stories have more in common: Conventional production in both countries is in decline.

Even with the dismal outlook for conventional natural gas production, individual investors are still able to take advantage of shale production from areas like the Horn River Basin in British Columbia.

In the past, the goal for Canadian gas producers was to pipe it to the United States, their only customer. Today it simply isn't economical anymore — and our own shale gas boom is a major reason U.S. gas imports from Canada have declined since 2008.

In fact, there's been a complete reversal since then, with U.S. gas exports to Canada increasing 55% during the last four years.

At home, the fact that more oil sands operators are moving toward in-situ production means Canada's domestic nat gas demand will continue growing. By 2035, production could more than double to five million barrels per day. 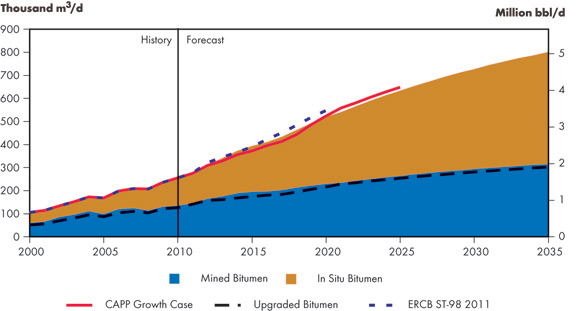 And if you think about it, why would Canada sell its gas to us?

After all, Canadian companies will have more profitable destinations in the not-so-distant future...

Canada's second — and more lucrative — customer will be secured through LNG exports.

Although we've been covering North American LNG projects for several years, Canada has one clear advantage over the U.S. that you don't hear much about. The U.S. media is so fixated on hyping future U.S. LNG exports that they fail to realize most of these shipments will be destined for Europe — not Asia.

It's for this reason the Kitimat LNG facility in British Columbia holds more value. Chevron recently bought a 50% stake in the project from EOG Resources and Encana. By 2020, Canadian officials expect to have a total of three LNG export facilities set up.

You target the right plays at the right time. In this case, it doesn't necessarily have to come from companies like Chevron, which are sending LNG tankers to the Far East...

No, you can take your profits right from the source: British Columbia.

Perhaps the best-kept investment secrets in the North American shale gas boom are based in British Columbia, with two plays investors should pay attention to in 2013.

And right next door is the Liard Shale. Apache drew attention to this relatively unknown play after reporting strong drilling results last June.

This abundance of natural gas — with such a close proximity to both Alberta's oil sands operations and future LNG export facilities — has created a win-win situation for investors and BC gas producers alike.