Birth of a Shale Gas Boom

It all started nearly two hundred years ago with a salt well in Charleston, West Virginia, 44 years before Titusville became the birth of the modern U.S. oil industry.

Except it wasn't black crude that came bubbling up from the earth...

This particular site was the birthplace of natural gas.

Unlike the famous oil wells that secured a place for themselves in history books — like the Drake well in Pennsylvania or the Spindletop well in Beaumont, Texas — it's safe to say the first natural gas well was largely overlooked.

After all, it wasn't until 1821 that William Hart made the first commercial gas discovery in Fredonia, New York.

Commercial uses for natural gas were limited at the time. In fact, the single hotel located in this relatively-unheard of town used the fuel for cooking.

Griswell wasn't planning on cooking with his new-found fuel source; instead, he used it in brine evaporation, marking the first industrial use of the fuel in the United States.

But neither of these historic moments trumps the recent shale boom taking place across North America.

And believe me, dear reader, our real love affair with natural gas has only just started...

Although William Hart is recognized as the father of natural gas, he may soon have his title stripped by a man named George Mitchell.

Back in the 1980s, when people told him he was wasting his money in a small shale venture in Forth Worth, Texas, he persevered. It took Mitchell the better part of two decades and ton of money to make it work...

And his efforts led to one of the most successful shale gas formations to date.

When Mitchell Energy was bought by Devon Energy in 2002, things really took off:

After the success in the Barnett, shale fever soon spread across the United States.

The result was nothing short of a revolution...

Think about that for just a second.

All it took was a new approach to tapping the tight gas resources locked in our shale formations...

And you can certainly see that addiction forming.

The EIA's latest data tells the tale on the transition taking place. Nearly all of our new electric generators are being built to run on natural gas: 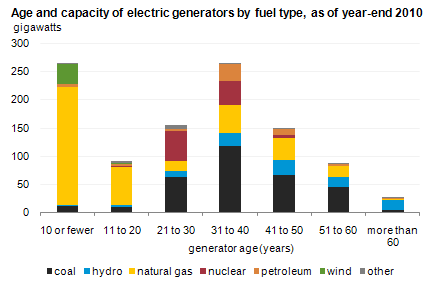 So not only is coal completely being phased out of the picture, but the truth of the matter is we're only leaving ourselves with one option for cheap fuel.

And this burgeoning relationship isn't some North American phenomenon; by 2035, natural gas could displace coal on a global scale: 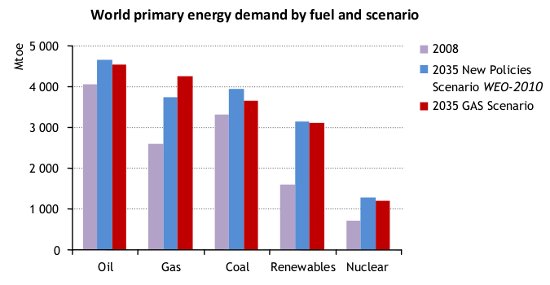 Of course, right now is the best time to take advantage — before everyone else catches on to this switchover.

The Real Investment in Gas is Here

Believe it or not, the first natural gas pipelines were made from wood in the early 1870s. The companies that laid the groundwork for our natural gas infrastructure were on to something big...

You see, prices may be in the gutter, but there's a single simple investment you can bank on today.

Last week, I told you why the upcoming bull market in natural gas will last for decades.