Maybe you greeted his upset victory with derision and disbelief, or perhaps you loathe the very notion of the blond bomber sleeping in the White House so much that even thinking of it makes your head ache.

I get it. No, I really do. I certainly can’t think of a more contentious election cycle than the one you and I just witnessed.

It’s been three weeks since the inauguration, and the situation has only been exacerbated.

But I want to reveal a few things that will anger you.

No, it had better infuriate you.

And the worst part is that it’s doing so right before your very eyes.

I don’t believe it’s hyperbole to say that America is crumbling. In fact, I’d wager that most — if not all — agree with me.

Because they’ve seen it, too... firsthand.

Just imagine what the residents near Lake Oroville think about America’s infrastructure as they were evacuated after a rush of rainfall damaged the spillways at the Oroville Dam. 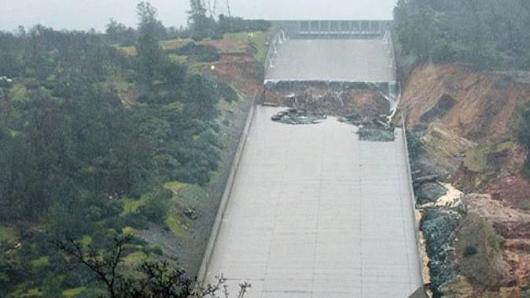 Don’t think for a moment that their troubles are an anomaly.

Truth is, there are over 4,000 dams in the United States — right now — that are at risk of failure; that number actually doubled since 1999.

Yet the most frightening part is that 33% of dam failures that have happened in U.S. history in the last 143 years occurred within the last decade!

Now, if you happen to be shaking your head in disbelief, appalled at the idea of America the Un-beautiful, don’t take my word for it. Instead, look at what America’s engineers are saying...

The American Society of Civil Engineers has been trying to warn us about the dismal state of America’s infrastructure for years.

In 2013, they graded America’s infrastructure a D+ and reported that an investment of $3.6 TRILLION is needed by 2020.

That’s not too promising, considering we have just three years left to make that deadline.

How bad can it really be?

But first, you’ll have to take into account that one out of every three roads in the U.S. is in substandard condition.

Or that 250 of the most heavily used bridges that are considered structurally deficient can be found on interstate highways. Nearly 90% of these were constructed almost half a century ago!

In fact, it would cost a cool $140 billion to repair all of the bridges in the U.S. that need it.

Here in Maryland, 26.8% — about 1,418 — of the state’s bridges are structurally deficient or functionally obsolete.

Don’t be concerned for me, either, because I’m more concerned about the residents in Massachusetts and Rhode Island, where well over half of the bridges fall under the same category!

So, if you drive across a bridge in one of those two states, you have a better chance of driving one that is considered structurally deficient by our country’s engineers.

Let that sink in for a minute...

When my readers and I started picking up oil drillers after we saw prices bottom last February, it was a no-brainer.

Let me be absolutely clear here: improving America’s infrastructure is the most glaring no-brainer I’ve ever come across...

Even if we ignore the fact that improving our roadways, dams, and bridges will have an incredibly positive effect on our economy.

Not only will it boost GDP in the long term, but think of the massive headaches you’ll avoid. Due to the lack of new roads, Americans squander more than 4 billion hours sitting in traffic jams.

Don’t worry; all that time wasted time will only cost nearly 3 billion gallons of fuel. As it is now, the average American spends almost one-fifth of their annual household budget on transportation. If housing prices weren’t so exorbitant, that would be our single largest expense.

Then, of course, we’d have to look the other way for the $29 billion worth of products that are transported via rail, port, highway, or waterway. (The amount of tonnage along being transported is projected to jump 88% over the next 18 years.)

Look, I know this is a sad story.

Anyone with even the smallest amount of empathy, whether they’re arranging furniture in the Oval Office or holding a protest sign outside the gate, will want to bury these facts deep within their subconscious.

Ignorance is bliss, after all.

Fortunately, the reality of our infrastructure is about to take a prominent position in the public eye. It will be carried on the back of President Trump’s $1 trillion plan to repair America’s infrastructure.

You might dislike him. You might even hate him. But if he follows through with this aggressive plan, it’ll be worth the scorn and derision.

That flood of cash about to pour into our infrastructure will more than just patch our bridges and roadways — it’ll also inject billions of dollars into the energy sector.

And that, dear reader, means we are staring at the next no-brainer. On Thursday, I’m going to release a special investment report that takes aim at an elite group of stocks that are in a unique position to explode higher during Trump’s infrastructure boom.