For a technology that's been around for sixty years, you'd think people would have gotten used to hydraulic fracturing by now...

In spite of it being one of the most contentious topics in the mainstream media today, fracking is the most critical development in the oil and gas sector, breathing new life into the industry — especially in the U.S.

I've seen the anti-fracking protests firsthand, and they've given me the chance to figure out exactly what people's gripes are.

Most protesters have a hard time separating facts with fiction, and so you can imagine their surprise when the USGS released a new study last week suggesting fracking wasn't the cause for drinking water contamination.

Is the war over fracking finally over? Well, I wouldn't get my hopes up for complete capitulation. Not just yet.

And honestly, it doesn't matter.

Contrary to popular belief, you don't have to pocket fracking profits directly from plays like Halliburton and Schlumberger.

And in fact, most of those massive companies were outperformed by much smaller players — like C&J Energy Services, for example — during the last six months: 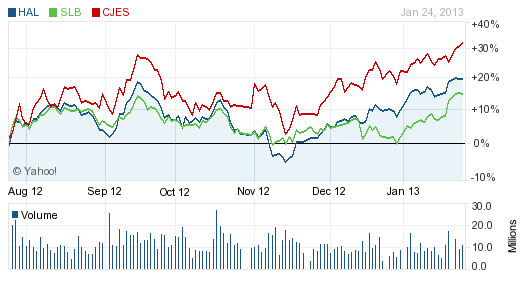 When it comes to finding the right plays taking advantage of hydraulic fracturing, it's better to look outside the box.

Now, let me say without ambiguity: The road to U.S. energy independence cannot be paved without natural gas.

We've been pounding the table on this idea for years, and you've been reading all about it in these very pages.

The only difference between now and a few years ago is that people are finally catching on to the fact that we have a massive natural gas resource at our fingertips. So you can see why it's quickly becoming our go-to resource for cheap energy (at least, cheaper than the others).

And hydraulic fracturing will play an integral role in developing this resource.

Do I believe we'll see more regulations to assuage environmental concerns (including both the unfounded hysteria and legitimate issues)? Absolutely.

Will there ever be a nationwide ban on hydraulic fracturing? Not a chance.

In fact, the U.S. Bureau of Land Management will release a new draft of their hydraulic fracturing regulations within the next two months. Some experts have suggested their first draft will have increased well costs by as much as $250,000 per well.

Fortunately, there's a way for you to think bigger — and invest more wisely.

When it comes to fracking investments, we aren't limited to companies specifically performing oil services here.

I want to tell you about two alternatives that a small group of investors are capitalizing on right now...

I believe the biggest hurdle to overcome for the fundamental energy shift about to take place is found in the sorely under-realized area of infrastructure.

But it's not the move to natural gas-fired power plants that's presenting us with a lucrative investment opportunity. When it comes to nat gas profits, it's all about transportation.

The trucking industry has stated before that nearly 16 million trucks account for nearly three-quarters of all freight shipped inside the United States. That's more than 430 billion miles racked up each year!

So during the next two years, it'll cost our trucking fleets a total almost half a trillion dollars to keep the cargo moving. (Try to remember that little statistic the next time you hear someone complain about their pain at the pump.)

And as I noted last week, without those shale gas plays, our gas boom would be nonexistent.

My colleague Chris DeHaemer believes those standard issue fracking plays aren't enough — which is why he's nailed down three companies addressing and capitalizing on this infrastructure crisis.

Then we have a whole other set of problems coming from the huge amount of hydraulic fracturing that needs to be done to keep the U.S. energy boom alive...

I'm referring to the sheer amount of drilling necessary for production to continue growing.

Ten years ago, companies drilled about 27,000 oil and gas wells across the U.S., including offshore. Today that number has swelled to over 40,000 wells.

Even taking a conservative approach, about nine out of every ten of those wells requires some form of fracture stimulation. And as you know, each hydraulic fracturing job requires over 10,000 tons of sand, and between 2 and 7 million gallons of water — per well.

Moving that much material to the well site is costly — and part of the reason why the cost per shale well can reach in excess of $10 million...

Unless, of course, you can find cheaper, more efficient alternatives.

It's no secret top-tier investors like Warren Buffett are spending billions of dollars positioning themselves with the right plays. And for the first time, individual investors can share in those exact same profits.